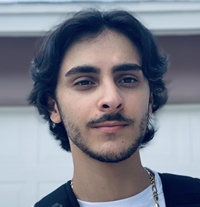 Visiting Tokyo has always been a dream of mine. I’m a foreigner, but this place doesn’t feel foreign at all. Even though I’m jet-lagged with baggy eyes and two hours of sleep, seeing Tokyo for the first time gave me the energy I didn’t have on the way here. As someone who lived in NYC, I’m used to seeing large suffocating streets filled with endless traffic, but here I wasn’t suffocated. The fluorescent neon signs gave Tokyo more of a gentle feeling compared to the bothersome signs I was used to. Tokyo made me tranquil, and the last remaining funds of my therapy money were spent on taking me and my girlfriend Laurie on a vacation here. This trip was exactly what I needed as a 24-year-old who recently completed law school. As paradisiacal as this place is, it still reminded me of a constant weight over my shoulders.

“Hey, Tobias, check out the cherry blossoms through the window,” said my girlfriend, Laurie.

She knew they were something I admired and found alluring. To me, New York only has boring-ass London planetrees that seemed to be overwhelmingly green with no distinction from any other tree. Cherry blossoms were something most men found feminine, but deep down I knew having a sensitive side and enjoying them wasn’t bad at all. Seeing the blush, relaxed, and bountiful individual pink petals on every tree reminded me of how refreshing spontaneity can be. “Did you know that cherry blossoms are Japan’s national flower? The Japanese call them ‘Sakura’,” I said with a smile.

“You learn something new everyday,” Laurie said while preparing a taxi ride from our hotel room to the amusement park we were going to.

I looked over at her phone to see the taxi ride price and let out a deep sigh. It’s the kind of breath that creates a burning feeling in your chest at the peak of every breath. It‘s like I was was expelling the stress in between every single oxygen intake.

“Look, you don’t have to worry about it because it’s taken care of,” said Laurie.

I put my stress aside and thought about my nervous excitement for the Japanese amusement park, SoarHigh, we were headed to.

On the way over to SoarHigh Laurie got a phone call and my mind began to drift off for what seemed like only a moment. Sometimes, my mind would do this thing where I only think of negative past life experiences. My dad was an emotionally abusive alcoholic that scolded me for my schooling my entire life, and he wanted me to live a life he never had, outside of poverty. I also thought about Laurie’s loss last year and how difficult it was for us to get over it. People often asked us if we were still expecting after the first few months and it broke my heart when I responded. Hearing the word miscarriage still haunts me to this day. Therapy helped for a few months, but after a while, I couldn’t afford to go. In a city like New York and as a law student, $500 a month added more weight over my shoulders that I didn’t need every time I visited. I decided to save what little money I had, and despite this trip costing a fortune, I knew it was the one thing I needed to overcome my loss. I didn’t want to think negative thoughts anymore, so I just thought of the cherry blossoms.

Laurie’s phone call ended and we were arriving at SoarHigh. I didn’t ask who called because I was still distracted by Sakuras. We walked out of the Taxi driver’s yellow car, thanked him, and headed into the park.

Before trying any rides, Laurie ordered me a lemonade from a nearby stand because she noticed the frown on my face and hoped to cheer me up.  I took one sip of my pink lemonade and noticed an obnoxious amount of pulp.

“Hey, what’s wrong?” Laurie said as she looked at me and noticed my discomfort.

“Nothing, there’s just stupid fucking pulp in my lemonade.”

She took the lemonade out of my hands before I could say anything else and asked for a new one because she knew I simply couldn’t bother with small stressors like this. This was the type of badass my girlfriend was. She was assertive, extroverted, and I was her opposite.

My girlfriend and I continued in the park and began trying different rides. Each ride had a distinct neon sign and lighting similar to what I saw in the city before we arrived. Laurie’s tan olive skin had a way of glowing in any light, and I admired how the fluorescent neon signs of every roller coaster reflected so beautifully on her. I tried my hardest to enjoy the moment I was in, and I didn’t want to think about the past anymore.

Laurie flipped her brunette hair over her shoulder so I could see her even clearer.

She looked at me with a serious expression on her face that looked as though she was prepared to break up with me. I always hated being asked something like this. Like, what the fuck am I supposed to expect when someone wants to talk about something important. Her breaking up with me made sense because what happened last year caused me to be a shell of my former self. Questions like these make my nerves tense up. If I’m being broken up with I just want her to get on with it. The thought of losing Laurie made me lose sight of everything around me and my entire body from my hands to my feet felt numb. The lights of the roller coaster and signs were blurred and my head spun even though I wasn’t on any rollercoaster.

“Wh-what happened to me?” I said as I woke up in the back of an ambulance.

“You had a really bad panic attack and bumped your head on a metal railing. Listen, you’re going to be alright, and I wanted to tell you something. My dad called me earlier and told me that he wants you to come work for his law firm after our trip. He said he’s going to train you under him and that he will help you financially as best as he can.”

“I don’t know what to say. Uhh I’m kind of at a loss for words honestly” says Tobias, as tears stream down his eyes.

“Tobias, there’s one more thing I need to tell you… we’re pregnant.”

Anthony Musca is a writer and pop-culture enthusiast from Buffalo, NY, that currently resides in Orlando, FL.