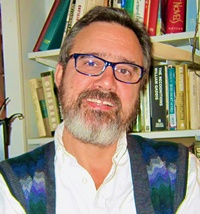 Most mornings I drank coffee on the back porch observing as they foraged on vine berries, honeysuckle, and new grass. The cat perched on a crumbling stone wall to watch over them. Our favorites were the two odd males on the periphery of the group — one missing his left antler, the other fully antlered, but lame, his left hind leg locked stiff and useless, dragging behind. At full light the herd would begin to mosey down the hill to where the woods are proper. Single Antler and Lame Leg were always the last to leave.

Our daughter visited in early July and brought up the question of misfit deer in the city. She said, “They wander like they’re waiting.” By the last week of August, only the misfits appeared. They often remained well past sunrise, lounging on cool spots of grass, heads tucked into early shade, napping safe and out of the way. In the kitchen we were careful, whispering, walking lightly in bare or socked feet. Lame Leg likely needed his rest more than most of the animals residing at the edge of our neighborhood.

I knew an older gentleman a few streets over when I was a Town Watch volunteer who carried a .45 in a shoulder holster when our group did rounds. The only time he ever discharged that gun was when we came upon a doe one night impaled through the shoulder on a spiked old iron church fence at the end of a one-way lane. While several of us began to discuss what we were going to do, he simply reached inside his coat, brought out his gun, and fired two shots into the animal’s skull. The carcass remained slung over that fence for nearly three weeks before someone made it disappear. The stench became almost intimate.

I imagined Lame Leg in a state of perpetual fear, knowing he was vulnerable to so much. Perhaps Single Antler was along for protection. They could have been brothers. Undoubtedly, they were bonded by a sense of impendingness and weird cervine concepts that none of us will ever understand.

Near the end of September, Lame Leg showed up in the yard by himself. He stood at the far fence nibbling on porcelain berries. Several hours later, I noticed him lying on the north side of the house. The cat was at the edge of the porch calmly overseeing everything.

Much later in the day, a dropping sun giving off that watery golden light it seems to nowadays, I stepped outside and heard a sudden, heavy rustling in the bushes. Lame Leg was struggling to stand. Something beyond fear or surprise came from him. I heard his rasping breath. He was drooling heavily, his mouth loose and slack.

“Where’s your brother?” I asked quietly. “What is happening to you?”

His three good legs were shaking. It was past four in the afternoon on a Sunday. What animal wants to die near humans in these moments of history? Was that even something an animal should consider? A form of final comfort?

I’ve never been sure whether I did it out of kindness and belief in the honor of the wild, or if I just didn’t want to be responsible for the remains of a dead deer in a time like the one we were just beginning to realize we are living in. Whatever. I screamed and stomped my feet, then charged, swinging my arms, hooting and hissing, trying to think up something that I could chant convincingly. He hobbled off best he could. As he stumbled into the woods, I heard a kind of moaning, or sobbing even, the way deer can.

David Biddle is a bi-racial Quaker American author who lives in Philadelphia, PA. He is the author of the novel Old Music for New People. His work has appeared in everything from The Harvard Business Review to The Best Short Stories of Philadelphia. You can track him down at www.davidbiddle.net