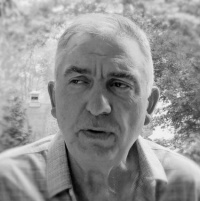 My wife told me,
that her sister,
the one I barely knew,
when she got

her pair of glasses
saw
that leaves
were their own selves,

not the rowdy bunch
of veins
and green
she knew.

Imagine
how irresistible
her joy was
when she met them.

The ceremony began with the unopened pack of L&Ms my father would
pull out of his pocket, hold in his right hand, flip it upside down,
and tap it several times on the back of his left hand,

only then he would carefully pull at the tab on the strip of cellophane,
flip the top open, select the cigarette he’d smoke and push the chosen one
up with his right thumb above the rest of the pack.

As he held the cigarette between the fingers of his left hand, the right one
would slip into a pocket and emerge again holding his silver Zippo.

The sound when he flicked the lid open would make the whole family pause,
the sort of collective awe Argentinians experience at the movies
when Fred and Ginger danced on a terrace under a sky full of stars.

By the time his thumb pushed down the small wheel that struck
the flint that caused the spark to awake the flame, we were ready to applaud.

The zenith lay ahead, when his arm rose like a priest’s
about to impart his last blessing, and he took the first drag,
pure silent grace as the filter would nestle between his lips.

We wondered where the smoke traveled when he inhaled,
before it would come out slowly through his nostrils
like the steam of a small vessel sailing down the dinner table.

For the Polish on Her Nails

The beauty parlor was her haven
and her fortress high on a mountain
inaccessible to men, men who had
a part in her making and unmaking.

I was her whisper in my father’s ear
that convinced him I was his idea,

his precious rib,
but only a whisper,

not to disrupt the polish
drying on her nails,
red as birth blood.

I was sung the tango
of the swallows with fever in their wings,
at bedtime,
by my father,

his idea of a soothing lullaby,
his impenetrable hypothesis
of fatherhood,

and I dreamed
I was made of
crude metaphor
swallows
and my father’s voice.

Being born in a big city
who’d imagined such river of stars!

I was illiterate as far as constellations,

unaware that shooting stars
gave their lives for our wishes.

Juan Pablo Mobili was born in Buenos Aires, and adopted by New York. His poems appeared in The American Journal of Poetry, The Worcester Review, Otoliths (Australia) Impspired (UK), and Bosphorus Review of Books (Turkey) among others. His work received an Honorable Mention from the International Human Rights Art Festival, and nominations for the Pushcart Prize and the Best of the Net, in 2020 and 2021. His chapbook, “Contraband,” was published this year.