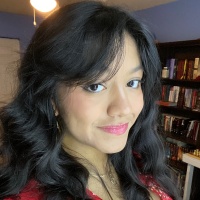 Among the various essays, poems, and works that I’ve written about my education,
I try to assert myself as someone rational, as someone who acknowledges her disadvantages but has grown from the pain of them.

I know who I am: low-income, first-generation, a daughter of immigrants, not academically gifted, but academically striving. These words, in turn, say “Look at her! Look at her strength! Look at her journey!” They almost always become the center of my pieces as I voice my experiences on paper. They molded my path as one rooted in difficulty and struggle; one that left my emotional state littered with scars. “Here,” I say to teachers, to literary magazines, to future colleges. “This here was engraved on my soul. Do with it what you wish, because its wounds have been cured.”

The truth though, is that as much as I want to appear healed, the ragged injuries the education system has left me with have festered; I acknowledge them sometimes, as products of inequality and injustice, hoping they will scab and subsequently heal. Without that hope, all I have left is rage, animosity, and badly healed scars.

I have a scratch that covers the entirety of my index finger on my left hand. It manifested itself in third grade when intelligence began to be “tracked”. Those who left for their specialized classes, would come back with fingers sticky with ice cream from scientific experiments, their thirst for knowledge quenched by new equations and new words. They were special; it was apparent to everyone, the words Academically Gifted (AG) latching onto them. At 1pm every day, the AG kids would leave and come back. I remained.

There is a scar that is not entirely visible, centered in my inner arm. It appeared not because of the high scores I achieved on my End-Of-Grade exams in 5th grade, but due to the reactions of my teachers when they found out.

I used to steal math textbooks. I knew that my classmates who had gotten into the AG program were receiving a more detailed and expansive education; and that I was falling behind. At home, I’d go over pages that we hadn’t covered in class and watch YouTube videos that solved the equations at the end, determined to squeeze every bit of information I could from it. When exam week rolled around, and my math score came back, I received a 97th percentile. As elation coursed through my exhausted mind, I watched as my teacher furrowed her brows. She murmured congratulations to me, praise absent from her voice, and then called for the next student. Her reaction was a confession on her part. Not only did she brand me as “unintelligent,” but she also believed I was incapable of growth and of brilliancy.

I carry a gaping, bleeding gash on my body that stretches from the top of my left breast to the right side of my hip. When my shirt lifts a bit, my friends always ask me about its origins. “Our middle school,” I respond. “Our school?” Some say. “I was not aware we went to the same school.”

The middle school I attended divided its children by academic abilities, separating itself into three groups: the VS (very strong), AG (academically gifted), and the Performing Arts kids (the kids in neither academic program). The VS kids received the best of everything– the funding for field trips, the beautiful classrooms, the best teachers, and the respect of everyone. The Performing Arts kids were subject to classrooms that were falling apart, old textbooks, and little funding. I was part of the AG program; a kid who, like the rest in my group, could be capable of academic grandeur, if it weren’t for the absence of privilege. We almost always regrouped with the Performing Arts kids, our hardships solidifying our bond.

Often, when recounting this division, I bring up privilege. How most of my group and the Performing Arts kids walked to school or got dropped off by buses, carrying dollar tree notebooks. Most of the VS got dropped off by Tesla’s, Subaru’s, and BMW’s, arms packed with Mead folders, and Ticonderoga pencils. How they carried lunch boxes with carefully packed sandwiches, while most of us survived off free cafeteria food. There was no difference in our intellectual capacities. The VS kids simply had the resources and encouragement to nurture their intelligence. We did not; we were first-generation, low-income, and plagued by at-home responsibilities. In the shadows, we created a community where we acknowledged each other’s backgrounds. We might not have their money or their opportunities, but at least we had each other. We alone could survive.

At the end of eighth grade, I applied to a prestigious public school that accepted its kids through a competitive process. More so than education, I wanted to prove that I was more than the labels placed upon me. I wanted to make my parents proud, and I wanted to show my classmates that we were more than what they made us out to be. How ironic, I’d think. For an academic reject to be accepted to one of the best schools in the state. I wanted recognition, and I wanted success. When I received the acceptance email, I remember falling on the cement pavement in front of my house, and the scrapes on my knees that were created. This is what I had been working towards all my life; to prove that I was great. That I wasn’t average, or ungifted. That I was smart. Later, I found it disheartening that 50% of those accepted to this school were from Lincoln– but all from the VS side. I was the only one to make it from my AG section.

When I entered, I remember looking around, anxious to find a face that looked like mine. I had stayed up the night before, searching up percentages. 3% of the kids at this school are Hispanic; out of 50 kids in a grade, the number averages out to 1.5. I remember praying that it would round up; It didn’t. In my two years at this school, I still do not know how to express the solitude that surrounds me here. I am deprived of the community I had felt so safe in, of the usage of my native tongue that I had grown accustomed to sharing with at least one classmate, of the unity in inequality my peers and I always shrouded ourselves in. My current friends are the very same people my former classmates and I vowed never to talk to because of their privilege; the very same people I used to hate because of their ignorance at the division at our school. Did you never realize how separated we were from each other? The inequalities in our educational experiences? I asked my current classmate once. No, he replied. We didn’t have to.

At times, my friends thank me for my insight, and how I offer them a different view of the world. Most of the time, I do not know what to say back. Whether I should reply with you’re welcome, or stay silent, knowing I can’t say the same for them.
These scars aren’t visible, nor are they tangible; but at night I am restless, my limbs aching with their phantom pain as I think of the climb, and how parts of me got left behind during the claw-up. I think about those still trapped in it; my reckless, desperately intelligent cousins, my previous friends who had so much to give but so little to prove it, and my older relatives, who dropped out because their schools made them feel like they had absolutely nothing to offer. The system allowed and continues to allow the falling behind of students who don’t demonstrate perfection to nurture its gifted students. They perpetuate stereotypes that not only carry on the myth that a kid who cannot pass an AG capability test is a kid not capable, but also enforce damaging self-beliefs onto the child itself, that they will carry with them forever. I wish I could say I spoke from growth and understanding; but I speak out of spite and defiance. Because instead of giving me the tools to succeed, the educational system left me for dead, not expecting me to get back up, fight back, and speak out.

Haile Espin is a Mexican-American writer from NC. Her work has been published in The Louisville Review’s 2022 Spring Edition, Apricity Magazine, and Valiant Scribe Literary Journal.

ALL THE NEWS by Thomas Hackney

MEDITATION ON OUR TRUE LOVE STORY by Sandra Perez