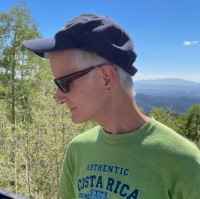 NO BONES ABOUT IT

Someone told me that my story
was a story that would be told.
But I can’t remember who it was
that spoke when he spoke so.
Or who he said the teller would be.
Or if I would be the teller
of my own story. A story that bumps
and grinds within my mind,
and throws its arms up against
my skull. Which is, after all,
the bone of all I’ll ever know.

I’m reading a book I bought secondhand
which was already secondhand before I bought the book
being a book that had once belonged to a library
so who knows how many hands the book had passed through,
though emblazoned on the spine in black block letters
was the word DISCARD, so it’s likely
the hands it had passed through were few,
as the uncreased pages would attest to, though I find
the poems within worthy of having been well kept,
and well worthy of keeping, and worth adding to my will
a codicil instructing my daughter that when the day comes
for discarding all else, please allow the once discarded
to lie peacefully on the shelf.

He passed away peacefully.
Peacefully he passed.

Across the room his wife
is watching a wasp

at the window. She is quietly
amused, unsure which side

of the glass the wasp is clinging to.

The distance we properly keep.

HOW PERFECT THE IMPERFECTION

All glass is broken.
Whatever its shape,
Or perfection.

The Earth is glass, and perfectly so.
From which we cut perfect forms—
False faceted diamonds, and globes
With their wet confetti of snow.

All of it cut from the Earth.
All of it perfectly broken.

Ken Holland, an award-winning poet, has been nominated three times for the Pushcart Prize, and has had work widely published in such journals as Rattle, Tulane Review, Southwest Review, North Dakota Quarterly, and Tar River with poetry forthcoming in a half dozen others. He’s won/placed in various contests and has had work included in several anthologies. He spent his rent-earning years working for various NYC publishers, and currently lives and breathes in the mid-Hudson Valley of New York. You can visit his recently launched his website at: www.kenhollandpoet.com