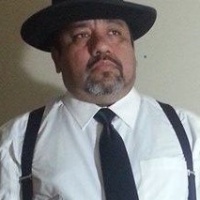 Cayley struggled with the two heavy bags of dirty clothes. She made her way down to the laundromat and searched for an unused washer. She tossed her clothes into the washer and put on her earbuds. She loved listening to 19870’s music, since childhood, it reminded her of her mom on laundry days.

Cayley did not notice the hooded guy entering the room as she daydreamed. His back was towards her, and he did not pay any notice to her either.

The wind gained momentum and lightning flashes lit up the night sky. This rain had better wait for me to finish the laundry.

Finally, she noticed the stranger. Cayley looked him up and down, wary of being locked in with a man whose face she couldn’t see. That was her biggest fear since childhood. She went to sit in the farthest corner from the stranger. “God, please don’t let the lights go out too.” She folded her legs to her chest and rocked back and forth.

In that instant, the lights went out as the lightning flashed over the small building. He turned his head and glanced at her with a smile. I hope she aint a crazy one.

“Damn, this just got interesting,” the hooded man said.

“Open up, please!” She ran to the door and tugged at it in a panic.

“Don’t worry. The release mechanism will kick in so you can open it,” He said, but his assurance fell in deaf ears.

“Our Father, who art in…” She prayed. Her mind whirled with distorted images of the stranger and unknown sounds from inside and outside the laundromat.

“I knew I should have waited till tomorrow to do laundry,” He said.

“My phone, where did I drop my phone.”

“Lady stay put before you hurt yourself,” he said.

This maniac lady actually thinks I want to do her harm. He shook his head and wandered in the dark searching for her.

“What is that?” she said, rubbing her head after bumping into a washer and small amounts of liquid flowed down her face.

That is what happens when you wander around in complete darkness, you lunatic. He said as he tripped over a trash can.

“Oh, Jesus I think I am bleeding,” She said, panicking.

He followed her panic-stricken voice on his hands and knees. I think I found her phone, now I just gotta find her.

She paused, sat still as she heard something almost metallic being dragged on the floor. He has a knife, Jesus I am gonna die in the darkness.

“I found you,” He said. His hand bumped into her shoe and ran it up her leg and then her arm.

“No,” she yelled, pulling her arm and leg away from him.

“Calm, the hell down, woman,” He said tightening his grip on her arms.

“Let go, you damn degenerate,” Cayley yelled. She swung her arms, landing a few scratches on the man.

“Lady, you are really beginning to piss me off now,” He said, drawing her nearer to him and fully wrapping his arms around her.

“God, help me.” She bit down on his shoulder and dug her fingernail into his neck.

“Please, please, do not hurt me.” Cayley said as tears ran down her cheeks and onto his hoodie.

“I am…” He said but was cut off as he felt two strong hands grab him by his hoodie and sent him crashing to the floor.

“What is happening?” Cayley asked.

“What the…,”He felt pressure fall on his back and shoulders. In that instant, the lights came on and he heard two voices.

“Ma’am, are you o.k.?” a man in a security uniform asked Cayley.

“That degenerate was trying to kill me,” she said.

“I was only trying to help you and keep you calm, you ungrateful…” the hooded man said. He tried to turn his head to see who was on top of him, but a hand slammed his head back onto the floor.

“Stay down, or it will get worse, Jack,” The security guard said.

“My name is not Jack, and as I said I was just trying to help,” he said.

“Sure, you were, Jack, “ said the security guard.

“My name is Tou Nguyen. I am the new live-in manager of this complex,” Tou said.

“What?” Cayley and the two security guards said.

“Look, lady, you need to not be so quick to judge and think before assuming things about people.” Tou said.

“I am sorry, I struggle with Cleithrophobe and strangers.,” she said, “And after I hit something, I thought I was bleeding and that you had caused it. I was panicking.”

“It took everything I had to stay calm, you lucky I am a gentleman, crazy lady,” Tou said. “As for you both, I should reprimand y’all.”

I am now gonna be the crazy lady to this whole complex tomorrow morning. Cayley picked up her phone and sat embarrassed as she waited for her laundry to finish up.

“Guy, wait till everyone hears this crazy story tomorrow,” the security guard said walking away and laughing.

Carlos Arce is an 8-year Navy veteran. He is currently studying online at Fullsail University for a degree in Creative Writing.