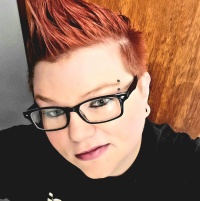 A rush of hot air assaulted me as I opened the door. The familiar ding of the door alarm went off as I crossed the threshold into my new regular spot: the laundromat. My washer had stopped working a few weeks ago, and as a broke college kid, I definitely couldn’t afford to replace it. Hell, I couldn’t even afford to get it repaired. Thank God my dryer still worked; otherwise, I’d really be screwed. I waved to a couple of familiar faces. Eric, a young, slender black guy, and his boyfriend Trey, more of a chubby, geeky fella. I found the closest washer, threw my clothes in, tossed in a couple of washing pods, and fed it my last bit of change, I walked over to the boys and plopped down beside them.

“Haven’t the owners ever heard of AC?” I grumbled at them.

“You kidding? You know they’re cheap as hell.” Eric snapped back at me. “The toilet in there still doesn’t flush! What do they want me to do, piss outside like some kind of animal?”

“Oh, you’re an animal alright,” Trey shot him a seductive look as a grin flashed across his face, “just not that kind.”

The two playfully swatted each other, their laughter echoing through the otherwise empty space. I slouched down, getting as comfortable as I could in the old plastic chair. I was 99% sure the owners got them from a school that had shut down. I soon found myself fighting to keep my eyes open. It had been one hell of a stressful week. I gave in and let out a sigh, finally relaxing.

“HELP ME, PLEASE!” an older woman screamed as she burst through the door. I immediately shot up, my heart beating out of my chest. The three of us locked our gazes on her as she ran towards us, falling to her knees.

“HE WON’T STOP!! HE’LL NEVER STOP!” she wailed. Her eyes were pleading for a savior; she was truly terrified.

“Sweetie, calm down,” Eric placed his hand on her shoulder. “What on Earth are you talking about? There’s no one there.”

My eyes dutifully moved to where Trey’s shivering finger was pointing. Against the large glass window to the right of the door was a man. Not just any ordinary man. He stood six feet tall, easily. He wore a tattered shirt and torn jeans. His hair and beard were unkempt; the rest of him was covered in dirt. He smiled at us, but this smile… this smile held something evil behind it. Blood was dripping down his chin. I wasn’t sure if it was his, or someone else’s. I wasn’t taking any chances, either.

They both nodded in agreement. We all looked at each other, and silently mouthed a count of three. As soon as we hit three, the guys rushed to the door, and I reached for my phone. I glanced up to check on them, fumbling my phone. I heard it hit the concrete floor with a heartbreaking smash.

“Shit!’ I yelled at myself.

“We’ve got bigger problems,” the woman’s voice trembled as she nodded towards the door.

The guys had made it, but not quickly enough. The man was already through. They were fighting to push him back out, to no avail. He grabbed Eric by the back of his neck, slamming his head into the door. The glass cracked loudly, and his body crumpled to the ground. The woman, still next to me, fainted, hitting the floor with a loud thud. Trey turned towards us and tried to run, but the man grabbed his arm and yanked him back. He was met with a headbutt that knocked Trey out cold. The man’s head quickly snapped back to where the woman and I were. His body followed obediently. He reached into his back pocket and pulled out a bowie knife; the blade was maybe 6 inches long and covered in blood.

“Well, that answers my question,” I muttered to myself.

He smiled at me once more, but this time it was different. He was a rabid beast, starving for carnage. I stood up quickly, stumbling backwards until I stopped against the wall abruptly. He was right there in front of me. His putrid breath seeped into my nostrils. His hand wrapped around my throat, lifting me until only my toes were still touching the floor. He showed the knife to me, holding it right up to my face. He drew back, breathing heavily. His muscles tensed, and I closed my eyes. I wasn’t going to watch myself die. I felt the warm steel press against my throat. I tried to utter pleas for mercy, but no sound would come out. I took one final, deep breath…

BZZZZZZZZ! I jumped up from my chair, nearly falling on my face.

“Woah, babe! You okay?” Eric asked as he gingerly grabbed my hand.

“Y-yeah, I think so,” I replied. I sat back down and took a deep breath. I looked around the laundromat. Everything was just exactly the same.

“I guess my clothes are done,” I sighed. I grabbed my basket, opened the lid, and pulled my clothes out. I waved to the guys as I backed up to the door, pushing it open. I walked to my car and opened the hatch. I set my basket down and pulled the gate closed. As I opened my door, I looked around the parking lot. Out of the corner of my right eye, I saw something: a man, dressed in a tattered shirt and torn jeans. He smiled at me, and my heart began to race.

“Nope, not today. Fuck. That.” I said aloud as I got into my car. I quickly threw my car into gear and sped off. I have since gotten my washer fixed.