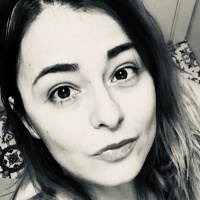 Half of New Territory

The rain’s let up
as the last few drops of milk and tears snake down
the cereal bowl, on the breakfast table,
covered in silence and soaked in honey-
we go about deaf and blind, two small splotches of desire
plastered on the kitchen wall
weak beyond measure, too fragile
to do a thing about a thing including easy breathing in the spring.
Days pass by and the nights never change
the work, the tiredness, the winks.
Well, there’s new meaning to you and me
that’s that to that
although there’s more to it I suspect
once love becomes stale and bitter and great
because we are great lovers and we love well
surely such a lustful matter
can’t be the simplest thing of all things
screeching time as it does
to an alt!
as love gets gifted away
as water parts apart
I see my bejeweled eyes and your bejeweled eyes
grow dim,
the laughing jaws
shattered in a million pieces
Aime’, quarantine all feelings
eat the fruit, throw away the sharpest knife
in the drawer; dwell
(immensely) and withdraw (immediately)
before the damned dreamers at dawn
join the chorus
my lovely
honey covered lover
of magical things.
my incomparably comfortable assumption
my non-replaceable and my arduous
my one and only
rebellious
piece of
shit hooked on
my desires!
In your name I vowed to throw away
my acclaimed name, my sovereign bones
my whispered worries, my heroic anger
my sharpened edges, my boorish silence
to give it all up in the name of a new feeling
in the hope of a wonderful new beginning
Spring/Spring/ Spring so much spring to begin with
Nonetheless, soon you’ll be gone and I will follow suit
the purity, simplicity, coldness of it all amazes me
and shocks me a bit, truth be told, because
it hits me hard and low how easy it is
for the tree to split open when it rains furiously
each befallen branch
purposeless,
spinning around bursting of health
a light breeze pursues us from the woods we
haven’t learned how to lie yet.
Little to do but repeat ourselves.

Up ahead, beggars and a home
Down below, the sky perfectly cast
things are done properly this side of town
as we let it all happen
ready to lose everything
at least twice
along with the bit of rain and the grain of salt –
This is how, child, we weather the night.
But you, you forgo the right not to perish, you
bend your head you poor little lamb
and the cry is heard for miles, I wonder why.
You could have become explosive like
poisoned rain
like terribly felt pain the first mouthful of spit
spat out in anger
you poorly raised, poorly silenced, poor, poor devils
who never asked for what you got
you aim low, cowards
you prefer to melt away into kindness
become squalid amidst the splendor
while the rest of us is forced to go down
eyes wide-open
twitching under the rain
enduring the pain
made to face the road
right after painting the fence bright and early in the morning
as all others run to mount the horses
and mothers count summer’s blessings.

The least saintly Pope in history they
claim to know
and waste no time to tell me all about him
Boniface, they say, his name is
and wouldn’t I like to
savor this Boniface like a kiss from the mouth of a stranger?
Imagine this, they say, how radiant you’ll become
if you learn about the least good Pope
if, for a moment, you think of him as your old Pops
perched over the counter, sigil in hand
small, doubly confused, caught mid-plunge
Until Pops himself becomes holy again
at the room of tears
in the back of the shop
I, myself, pay no heed to the dirt
spilling out, taking over
on the verge
of becoming holy and warm
like poison in the mouth
as they start manning the trays of fruit gone bad
naturally, I can’t remember what’s his name, Boniface-the-bad
just like I’ve long forgotten pop’s tricks of the trade
who knows,
maybe he’s still patiently waiting
at the shore for life to throw him a bone
after all, there’re plenty of blinding headaches to nurse
more drinks to pour
unbearable tales to tell
inadequate feelings to fight
as he gets lost-and-found
The only one, the bad one
again.

As you knowas it has been said
I am the one who set the family woods on fire
and allowed the fire to spread
because
out of all things told
none I forgethow to grow old and happy
how to hope and end all hope!
Ma’ had a hard time
(she always needed a lot of room
for imagination to go and imagine things)
but in the end
she let me tear all over her easy as pie.
Pa’ on the other hand
the perfect audience with expectations
asked me to quit the mute game played on innocent hearts
and some years later, died, on a soft sunny day.
Ma’ is now done crying
her memories all flown away like birds uncaged.
She is done lighting up from inside as a matter of course
done calling her gods, the brave, the dead, the woods,
the smiles she gave, the hurting she took
Ma’ s presence hurts like an absence
this still too young old lady
who doesn’t realize she can’t remember a thing.
They stay
hidden at the bottom of things as if embraced by the sea
their voice like water, their moves frozen
infinite summers away,
permanently grinning
Ma’ absentmindedly Ba’ calmly
(from the couch, from the headstone)
They keep keeping themselves honest
never liars, never tellers of tall tales
even when made to parade like gulps of dreams
into a retrospective of sorts
under the spring rain
in front of my despairing
facing the world.

Working across painting, collage, and digital media, Odeta Xheka’s story parallels the highs and lows that countless women artists face as they negotiate the demands of daily pressures of the family with the aspiration to make ambitious art that is both sensitive&cerebral within an existing culture that likes things to be simple and pigeonholed. As a woman, fated to be narrated rather than be the narrator, she makes art to claim her voice because art is the opposite of speechlessness. Her artwork has been shown extensively, most recently at Abington Art Center, Sebastopol Center for the Arts, Annmarie Sculpture Garden&Arts Center, Maryland Federation of Art, Praxis Photo Art Center, and WoArt while her creative nonfiction and art criticism has been published by Memoir Magazine, Kolaj Magazine, Muther Magazine, and Literary Mama among other online and in-print publications.