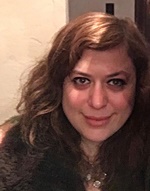 Today the gathering comes after the storm
and I sit tight, my teeth pressed together
like keys in intricate locks,
while outside that stillness starts gathering, a solemn warning, asking us to clear up some room for the leaves about to be swept in circles by the wind, which warns us, “It’s coming, it’s coming, it’s coming for us,” that vast cosmic inhale, everyone’s breath bated and waiting, that turn of phrase just on the tip of everyone’s tongue, the first flicker of steam and hope as everyone leans over the platform as though to beckon it, eager and wishing that this time the train will come in time and not too late, everyone thinking, “I thought I couldn’t, but I could,” “I thought I couldn’t, but I could,” everyone’s eyes forward to the future, everyone’s hands open and inviting, everyone’s mouths half open to what’s to come, everyone’s
but not mine
because
I know
it’s all behind us

and my teeth click together and my jaw locks and tiny birds flock together and land in a line to climb the steps of my spine, to creep up my neck and guard the jagged edge of my locked jaw and they take that turnkey that I didn’t see coming and press it into a secret sweet spot that nobody knows and they wind it and wind it and wind it like a jack in the box, only instead of springing open it grinds tighter and tighter until it is closed for good.

Back then
in town
I felt every shift of the wind
with breathless desperation,
my feelings carved into the world’s most sensitive piano,
my nerves its gentle keys
played upon by glances from tattooed boys
too stoned to see
and slight head turns from punk rock girls.
The faintest eyebrow lift, the subtlest nostril flare
played like Tchaikovsky in caverns inside me,
my appetite prey to each twist of the wrist.

It’s no wonder that the rape undid me; the softest rain undid me.

The girl with all the A’s, the teacher’s pet, with the swimming pool, the field of llamas, and a tractor’s license at fifteen, she undid me with jealousy.  Her miniscule kitten plucked a high string loose, left a key dead.

The rape smashed through my inner workings and tore me out of tune, so far out that I didn’t know what to call it, named it a mistake like something scientists make.

Still, I wasn’t the only one.  I may have sat limply like an unspooled sweater, but that was part of the posture of the times, part of the wardrobe just like those unspooling sweaters that spilled from the veins of Kurt Cobain.  We sat together on those stoops, smoking cigarettes and vibrating in the glare of all those gazes newly aimed at us, just

Stuck in our cocoons, impatient to break through, to be loud again,
to be liberated, our bodies secrets we were
incubating, stuck on the stoop and still just waiting, just us
girls together, doing the nothing that turned out to be
the best parts of those yearning days.

Meeting in the Middle

Two pilseners pressed together at a bar, the swift clink of a dull bell,
a spoon to a wine glass at a wedding, ringing out to tell us that a toast is to come, let’s all raise one for the magic trick that turned these two into one, one bride and one groom, one big change celebrated with the same toll of the same bell that resounds in the wake of the dead
meeting together in that same place where the space between keeps vanishing
where one goes from being one to being one dead body
where first one is the falconer, then the other, and then they’re both birds, both luring each other back, blurred like movement, dissevered like flocks, brought together the way that language hovers between us, misdirecting when what was said transforms, becoming what is heard, and so it goes, one word to the next, we know intimacy not by the words but by when we need to say the least, meeting eyes across a crowded room at a party, that slightly exaggerated Interesting uttered with such sincerity—heard by many, understood by one, sometimes the middle isn’t even between things, it overlaps, two people speaking simultaneously, sharing the same thought, sometimes in silence meanings pass, sometimes nothing passes, yet a mood still crosses across a crowded room when someone new—teacher, priest, president-elect—suddenly enters, unexpected.

That pause is pregnant.

We are just born, thrust into the world like a drowning woman thrust up into the night.  After that, the middle.  The end is death.  As sudden as the first shocking breath, the world as undisturbed as the waves would be if the woman just kept grasping beneath them, never quite reaching what she needs, her middle falling fast as an anchor to the same seabed, and the waves, the waves, they come and they pass, one after another, another after one, and another, another.

About the Author
Olivia Harman is a therapist in St. Louis, MO, where she also plays music with her band, No Man’s Law. Many years ago she published poems in Hanging Loose and a few other publications. A long detour resolved into a circle, ultimately leading her back to these pursuits.