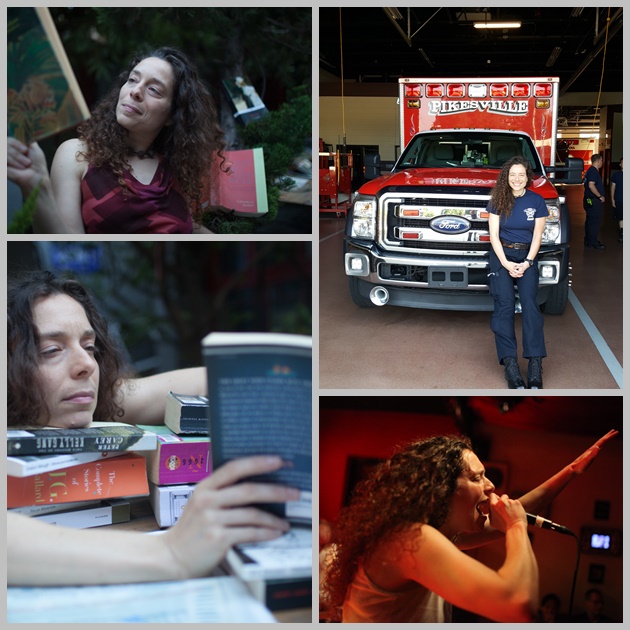 MA:  Being asked to describe myself induces cautionary impulses about inflating the ego.  I prefer to make fun of myself.  My affect is innately cheerful, so it’s been a disappointment to be born into a relentlessly miserable existence.  Still, I consider myself lucky to have spent the first half of the twentieth century in my pre-birth phase; and the odds seem good that I’ll die before climate change-related extreme weather events render the planet uninhabitable by humans.  Call it a win!  Educated at Rutgers University (Theater Arts, BA), UCLA (Law, JD), and Goucher College (Post-Baccalaureate Premedical certificate), I am currently applying to medical school.  Diagnosis: glutton for punishment.  Between 2004-2014, I lived most of the time in Beijing, China, with some time-out spent in Kenya, India, and Nepal.  I have been all-over-the-map career-wise, as well, having labored (at various times) as an actress, lawyer, front-woman in a blues-rock band, UN consultant, emergency medical technician, and arts-event organizer.  The complicated, inter-disciplinary, arts-evening-in-a-wine-shop&bar called Amplified Cactus is partly my fault.  I speak Mandarin Chinese poorly and aspire to be non-verbal in all other languages.  With respect to this goal, I am an abject failure.  I have written four novels and am at work on a fifth, with a concurrent cycle of linked short stories in the works.
For more information, to read short stories, buy my novel, or web stalk, see:
www.mayaalexandri.com
www.facebook.com/amplifiedcactus
https://twitter.com/May7a
https://www.facebook.com/maya.alexandri
https://www.linkedin.com/in/maya-alexandri-62607613

ALM: Why do you write or what motivates you to write?

MA:  I write because it is my vocation.  I have that inborn confidence in this truth about myself that can derive only from an irrational source, like faith.  Cue Bach.

MA:  The Celebration Husband is the fourth novel I wrote, but the first published, in 2015, by TSL Publications in the UK.  The book was “inspired” by the suggestion-demand of my agent-at-the-time that I write the next Gone with the Wind, or at least something for which the film rights could be sold.  As my current agent remarked, “[That agent] didn’t understand you at all.”  Welcome to my life.  After reading Gone with the Wind and undertaking some research, I focused on the life-and-times of Karen Blixen (nom de plume: Isak Dinesen) as the mulch for my novel-garden project.  I grew my then-agent’s expectations into an historical, action-adventure, romantic comedy about World War I in East Africa that, despite the plot’s basic Hollywood implausibility, I continue to love.  Naturally, my then-agent dropped me from her roster when I was sitting in the middle of rural Kenya in a cottage, by myself (plus the bats and lizards who shared the cottage with me), finishing the first draft.  What to do but persevere?  The episode seems to have baptized the book for a rough initial trajectory, though.  Years passed, and the darling thing would likely not have blossomed out of the bud of manuscript form, but for my blessed publisher Anne Samson, who learned about it through one of experts I’d consulted in writing the book and recruited the manuscript for publication.

ALM: How long did it take you to write your latest book and how fast do you write?

MA:  The Celebration Husband took me six months of concentrated writing (it’s over 100,000 words) — I wrote every day, usually for about eight hours, and usually completing 1000 words a day.  More generally, I write 500-1000 words every time I sit down to write, though I can sometimes pour out 4000 words in a sitting.  A long sitting.  And if a couple of hours of work yields only 325 words, I’m happy with that, too.  My rule-of-thumb for speed is that I need to complete any writing endeavor within 18 months because my writing changes enough that, within 24 months, I am sitting down to write or edit with the taste and skill set of a slightly different writer than the one who began the story.

MA:  I really wish that I had to be in Venice before I could write a word, but I am afraid I am not interesting enough to have writing fetishes.  I think my writing patterns are more like a journalist … or a lawyer.  Something needs to be written, so I write it.  If I am at home, in transit, away, in a library, cafe, on a boat, on a mountain, tired, hungry, under-caffeinated, unappreciated — all irrelevant.  I don’t even smoke.

MA:  The Old Testament; Ovid, Metamorphoses; Buddha Ghosa, Dhammapada; Dante, Inferno; Shakespeare, Hamlet, Othello, A Midsummer’s Night Dream, and As You Like It; Jane Austen, Persuasion and Mansfield Park; Gustave Flaubert, Madame Bovary; George Elliott, Middlemarch, The Mill on the Floss, and Silas Marner;  Mary Shelley, Frankenstein; Henry James, The Golden Bowl, What Maisie Knew, The Turn of the Screw, and The Aspern Papers; P.G. Wodehouse, Thank you, Jeeves, Right Ho, Jeeves and The Code of the Woosters; Stella Gibbons, Cold Comfort Farm; Evelyn Waugh, Scoop; Ralph Ellison, The Invisible Man; Tayeb Salih, Season of Migration to the North; Jorge Luis Borges, The Aleph and Other Stories; Mario Vargas Llosa, In Praise of the Stepmother, The Feast of the Goat, and The Bad Girl; Shirley Jackson, The Haunting of Hill House; JG Ballard, Super-Cannes; DM Thomas, The White Hotel; James Baldwin, Another Country and Giovanni’s Room; Penelope Fitzgerald, Offshore, The Bookshop, and The Blue Flower; John Kennedy O’Toole, A Confederacy of Dunces; Haruki Murakami, Norwegian Wood; Roberto Bolano, 2666; Madison Smartt Bell, The Color of Night.  Plus hundreds of books I read as a child: E.L. Konigsberg, Father’s Arcane Daughter; C.S. Lewis, The Lion, the Witch, and the Wardrobe; Madeline L’Engle, A Wrinkle in Time; L. Frank Baum, The Patchwork Girl of Oz; Yehoash Biber, The Treasure of the Turkish Pasha; the books of Karl May.

ALM: What other influences are apparent in your writing?

MA:  Opera, theater, and painting especially influence my work.  From opera, I have learned the aspects of narrative that require words — whatever part of the narrative requires, instead, music, might be better rendered allusively or poetically.  In particular, Strauss’ Electra, Verdi’s Othello and Il Trovatore, Saariaho’s L’amour de Loin, Monteverdi’s Orfeo, and Handel’s Acis and Galatea have had a big impact on me.  Theater (both acting and spectating) has taught me how to organize characters in the space of a scene, as well as dialogue.  The brilliant plays are too many to name; Noel Coward’s Design for Living and Private Lives in particular stand out for these aforementioned skills.  Painting teaches the balance in a written scene between nouns and verbs / tableau and action, as well as the power of composition and color; viewing paintings prompts me to engage the reader’s visual imagination, using words to conjure pictures.  Painters who have been so important to me that I could weep include Veronese, Titian, Bosch, Rembrandt, Goya, Gauguin, and Matisse.  I am currently collaborating with an endlessly talented painter, Nathanael Absher, whose work can be seen, along with mine, in The Light Ekphrastic.

ALM: What is your best method when it comes to promoting your books?

MA:  Word of mouth; and I do my best to support positive word-of-mouth through reading and arts events.  Please note: “best method” is really relative here.  The best method for promoting my — or any other — book is a global cyber attack that shuts down the Internet, cell phone reception, and cable television, combined with a gasoline embargo, and accompanied by the threat of an infectious disease epidemic that miraculously cannot be transmitted in a public library.

MA:  Be kind to yourself and others.

MA:  I just finished Peter Green’s gorgeous translation of The Illiad, and I am just starting Madison Smartt Bell’s second installment in his brilliant Haitian Revolution trilogy, Master of the Crossroads.

MA:  I re-read Ovid’s The Art of Love regularly; I have probably read PG Wodehouse’s short story, “Romance at Droitgate Spa,” more than a dozen times; Guy de Maupassant’s stories, “Maison Tellier,” and “A Ruse,” are also favorites.  Haruki Murakami’s short story, “A Shinagawa Monkey,” reorganized my mind after I read it.  I love Alan Hollinghurst’s, The Line of Beauty, and Howard Jacobson’s, The Finkler Question, both of which I’ve read more than once.  Anthony Trollope’s Can You Forgive Her? has been a comfort to me in times of grief.  Tayeb Salih’s Season of Migration to the North is probably the most important book I’ve read in my life; I’ve read it at least five times.  I also read poetry almost every day.  Rumi, Hafez, Zbigniew Herbert, Louis MacNeice, Coleridge, Frederick Seidel, and Frank O’Hara are among the poets I love to read, and I am a big fan of Neil Astley’s anthologies of poetry, Staying Alive, Being Alive, and Being Human — they are my standard breakfast reading!

ALM: Thank you Maya. See you around…