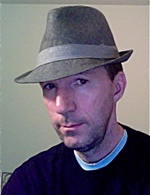 “…my work holds up a  real life example of how the world will look when being gay is seen as the inevitable variation of human personality that it is.”

ALM: Tell us a bit about yourself, about Timothy Robbins, a poet, and how many poems you have written.

TR: About myself? Of all my qualities I’ll say the first that comes to mind and that I think is essential: Through some combination of nature and nurture, I have never doubted my self worth. That’s a gift I wish everyone had. How many poems? I couldn’t even guess. I started writing poems when I was about thirteen and have been writing on a more or less daily basis since then. Also, I wouldn’t know exactly how to count. For one thing, I’m a constant reviser and would be inclined to count each version of a poem as a poem unto itself. Also, should I count the text that I often use as an element in my drawings and paintings? How about the “liner notes” that, in my teens, I scribbled on the inner sleeves of my favorite LPs?

TR:Yes, I remember. In the fifth grade I wrote what I thought was a satyrical poem (I think it was in rhymed quatrains) about the presidential campaigns of 1976.

ALM: Why do you write poetry? Why is the poetry a literary form of your choice and have you ever think of writing a prose?

TR: Oh, it’s definitely not a choice. Poetry is what I have to write and the only thing I can write — much to the chagrin of my friend David (an English professor) who thinks I have a novel in me (I’m sure he’s mistaken) and my parents who, as parents should, think about the greater commercial potential of a novel. The best explanation I can give is that poetry is how my brain works.

TR: I worked on several poems this morning. One (so far) is called “Namesake.” It was inspired by parallels between my life and the life of a friend of mine whose name is also Timothy.

ALM: How long it took you to write your latest poem and how fast do you write?

TR: I write very fast and very slow. The first line and the basic structure of a poem are usually in my head before I sit down at the computer. Then the first draft of a piece that’s under one page might take 30 minutes of less. The long part is that it usually takes months or years before I’ve done enough revisions to say, “That’s finished” — or, In Valéry’s terms “Time to abandon that.” Of course, it’s a thrill when, form time to time, the first draft of a poem comes out just right, fully formed like Athena from the head of Zeus.

TR: I don’t think so. I need a really quiet place, preferably with a window. I like to have certain familiar objects around me. News ideas usually come in the morning (I get up around 4 a.m.) or in the shower or when I’m out walking. I think that’s all very typical. You know, I never thought about it before, but now that the question has been put to me, I’m starting to feel the urge to acquire some odd rituals.

ALM: Is it poetry or writing the only form of artistic expression that you utilize, or there is more to Tim Robbins than just poetry?

TR: A round-about answer. My middle name is Allen, which means all the combinations of my initials are words — and I feel, words that apply to me. Tar, because I stick to things and people. Rat, because I’m on the small side — but not really small, not a mouse. And also because I’m not motivated by the kinds of ambitions that motivate more presentable animals. Tra as in “Tra la, it’s May, the lusty month of May!” because that’s just how I am. And Art because that’s always been at the center of my activities. Singing, Playing guitar, piano, harmonica, Writing songs, Painting and drawing.

TR: Having found a sympathetic editorial board at ALM, I’m working on, if it works out, my first solo book.

ALM: In your opinion, what is the best way when it comes to promoting poetry? Did you ever think about the profile of your readers? What do you think – who reads Tim Robbins?

TR: Promotion? The internet, I suppose. This doesn’t seem to be happening much. I know a lot of the ads I see when I go online are aimed specifically at me and shaped by what I’ve bought and sites I’ve searched. Yet, although I’ve listened to lots of youtube clips of people reading poetry, I’ve never seen an online ad for poetry. How do I consider the reader when I’m writing? I ask myself two questions: Will this be clear to a reader or is it only clear to me because there’s background information in my mind that can’t possibly be in the reader’s mind? And, am I underestimating the reader by explaining something that I should leave for readers to figure out on their own? I assume my readers are people whose taste in poetry is similar to mine. I dislike obscurantism (you’ll notice that Pound and Joyce are not in my list of influences — although maybe I should have listed them as negative influences.) I prefer the concrete to the abstract. The music of the language is important to me and I use all the traditional tools — but not in a regimented way because it’s important to me that the music be modern, which mostly means, not far from real speech, and certainly not forced into unnatural rhyme schemes and metrical straight jackets. Oh, that sounds like I don’t like conventional verse, which isn’t true. I do like it — to read.

TR: I recently heard a radio interview with a mystery writer who said that every author needs a good sounding board. This must be someone whose literary  judgment you respect, someone who is willing to tell you honestly what they think about your work, and someone who is 100% on your side and eager to read everything you ask them to read. (It occurs to me that this probably holds true for every profession, every important human endeavor.) It may not always be possible to find such a person, but I would advise any writer to try really hard to do so. Also, be willing to consider any suggestion that comes your way. The poem is the important thing, not the poet. The poet is just the conduit. And if a poem needs more than one conduit to reach its ultimate form, that’s not something a writer should get bent out of shape about. When an editor suggests a change to me, I remind myself that “The Waste Land” was in a real sense the result of Eliot and Pound’s collaboration — and then I think long and hard and decide whether I agree with the editor’s idea.

TR: It came from Henry James and from my grandmother and I believe it comes to the same thing. James said, “Try to be one of the people on whom nothing is lost.” My grandmother told a friend of mine on the eve of his wedding, “Talk about everything. Nothing is too small. Everything is important, so talk about it.”

TR: The Golden Notebook by Doris Lessing and La conquête de Plassans by Zola. I’m usually in the middle of something in English and something in French. Oh, and while I write only poetry, I prefer to read novels.

TR: Tolkien and Dickens (thanks to my sixth grade teacher Stephen Mills) are important. They are why I fell in love with reading and why I first felt the urge to write. No writing gives me greater pleasure than that of Shakespeare and Dickinson. Ginsberg, is not a favorite, but I owe him a great debt because his work, when I encountered it at the tender age of 15, catapulted me from the era of the Pre-raphaelites to the latter half of the 20th century. Anne Sexton appeals to me. And Sharon Olds. Also modern translations (Kenneth Rexroth’s for instance) of Chinese and Japanese poetry. Kawabata Yasunari and Mishima Yukio. My relationship with Dylan’s work is unique. He’s the only artist whose work I can and do routinely “recite” — which means sing, of course. I’m sure I’ll wake up tomorrow and think of a book I really love and should have mentioned.

TR: I guess this means relevant to the society I live in. I have always been surrounded by friends and family whose acceptance of me as a gay man was absolutely reliable. I do have poems that reflect the lives (and deaths) of gay people who are not so blessed. But on the whole my work holds up a  real life example of how the world will look when being gay is seen as the inevitable variation of human personality that it is.

ALM: W.C.Williams once remarked that he was more proud of all the babies he’d delivered than the poem he’d written. Is there something you’re more proud of than your poems?

TR: Yes. My twenty years with my life partner and the hundreds of students from all over the world who have honored me with their presence in my classroom.

ALM: Thank you Tim. Good luck with your writing and your art.