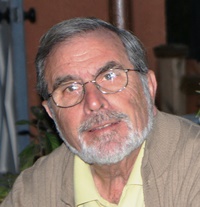 NEVER TOO LATE
by Jose Recio

From her last alcohol binge, instinctively, she ended up at his door. They had been drinking buddies, and later, lovers—a long time ago.

With whatever remained of her, and her seventy years of age weighing on her shoulders, she sat down at his kitchen table across from him.

“What’s left of you besides bones and a flicker of spirit in your eyes?” he asked, fearful of smothering her last breath of hope.

“Habits we develop over the years. Some bring happiness and others tears,” she said in a shaky voice.

“You’re consumed by alcohol. But you won’t admit it, will you?” His confrontational approach softened as he viewed her pathetic appearance.

“Perhaps this is my last port. I drop anchor.”

She had a coughing spell; then, she lit a cigarette.

“Sure,” he said. “I guess next you’re going to make smoke rings and tell me stories of years gone by.”

“Why should I?” she said and exhaled halos of smoke through her protruded lips. “You know them all. Alcohol, nicotine, gambling—”

“Indeed, I know all your habits, your joys, and hurts.”

Through ringlets of smoke, she threw him an avid look.

“Maybe we pray to break these bad habits,” she said.

“I doubt praying alone will do it. I also struggle to stay sober.”

She offered him a cigarette. He shook his head; then, he got up and brought two glasses and a bottle of water.

“Please,” she said and pushed a glass toward him. So he poured a glass of water for her. “I guess you’re happy,” she added. “Spring is here. You made it through winter.”

He poured water into the other glass for himself. “I’m listening,” he said.

She drained her glass.

“I want to quit my drinking,” she said. Now her voice didn’t sound shaky.

He became aware of her return to life.

“You took off on your own,” he said, trying to dissipate any tone of reproach in his voice, “and now you return to my door, wasted and in need of compassion.”

She dropped the cigarette butt inside the empty water glass. “Without alcohol, I fear my life will turn dull,” she said.

He rapped his fingers on the table. “I fear alcohol will soon kill you.”

She raised her eyes toward him, and now her facial features softened, and tears ran down her cheeks. “I don’t want to face life, stripped bare.”

A silence followed. She tried to recompose herself. “I need help,” she said, dabbing her tears. “I need your guidance.”

“Not so,” he said. “Alcoholic Anonymous ought to be your guide. I can only support your initiative.”

“Why not next month?”  he replied ironically.

She hesitated. “Today,” she said.

She nodded. They got up and left together.

Jose L Recio was born and raised in Spain. He studied medicine in Spain and later left for California on a Scholarship. He currently lives with his wife, Deborah, in Los Angeles. While in practice, he published several papers in specialized journals. Over the last few years, interest in creative writing keeps him busy. Having grown to become bicultural, he writes both in Spanish and English, and sometimes he translates his texts.