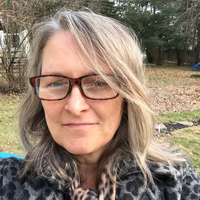 THE LOST RIVER
by Jane Varley

my ear inside out,
rapidfire thrum of tiny bones.
Time machine of thought:

Someday you will have a little girl.
No. I didn’t think it then.

Not possible. Some other joy
woke me into that moment,

some thought
or memory (as I
kaleidoscope the whole idea of memory).

Twenty years before, same campsite,
we woke to see a moose
paddling across the river

the big rack like an altar
before a congregation.

waking us to aliveness,
to a passion for land and water,
a realization—
we didn’t have to stay there forever—

no, we could carry it along.
Something like that
(I am getting caught up)

(blessed, not a word of religion
but of belief)
Hats kept us warm, the blue and white tent
looked fresh as a linen closet.
Our coffee was called Morning Glory.

The transcendence of the sea and sand
with backdrop of blue sky, and the
silly perfection of my pink motel

looking like a set for a movie based on its name—
Oceanus. When I walk the beach
I think of all the people who have strolled

in this same way, walking away from life
and walking toward it—no matter what
we move both ways. My brick Ohio house

and the bracings of motherhood seem far away
(I do like those tasks, that series of problems).
I reach down and pluck up the perfect shell.

Listen, the solar system weeps and then laughs.
I am a cliché of the tiny and inconsequential
yet joined with a force beyond my comprehension.

In 1983 a 7.3 earthquake shook the Lost River range in Idaho and lifted Borah Peak, the state’s highest mountain, over 7 feet.

The Lost River is a stream that descends into a depression and flows underground until it spurts from basalt cliffs at Thousand Springs, Idaho.

Good morning. First sip of coffee so black
and bitter it clears the vision while the sun

squats on the ridge (briefly) and casts diamonds
on the water. This is how I rinse my face

in the river, how I light a fire
of perception, ash crackling against its own

internal dampness. Tie up the boots.
Steady the compass. Reading my map

I am given advice by a stranger
(strings of hair, a broken tooth, jeans could stand

on their own) for the trailhead, the do-
able climb, my perseverance at

Chickenout Ridge, but he sees someone
I am not—a serious hiker who achieves

the summit. Not me. What I crave
is the everyday impossible

as when an earthquake lifted Mt. Borah
seven feet higher and the valley floor

dropped nine. This is nature.
This is sudden cosmic change. The moon,

that watcher, saw a new face
on the mountainside. The river is gradual,

flowing southeast where it vanishes
into the plain, water ghosts leaving behind

their trail of fragrance. A friend told me I can
go to a Thousand Springs and see

a one-of-a-kind fish with the head of a prince,
the Shoshone sculpin

swimming waters that had traveled
a hundred miles underground

before bursting from the canyon wall.
If we go, we will sit with our cups

and no one will have died, and no one
(those other ghosts) will be whispering.

The crystal falls will offer white songs
cool as the interior of the sea.

Biography of a Bee

This is the biography of a bee who flew around the world
gathering nectar and pollen and single-handedly
double-wingedly made the world grow again the whole
world greening up and the flowers coming back
and the flowers were arranged in all the colors
of the spectrum a rainbow of flowers in a healthy world
and the rivers regressed to flow across the land
as the valleys inverted and sloughed off the dirty old rocks
the graffitied and drilled and abused rocks the formations
rose up and melded back to young healthy rock fired
by the hot magma fueled beauty burning so intensely
out of the center of a world that would not be destroyed
and thanks to that one single godlike bee about which
you were writing the biography.

Jane Varley is the author of a memoir, Flood Stage and Rising; a chapbook of poetry, Sketches at the Naesti Bar; and co-author on a coaching memoir with NCAA Hall of Fame fastpitch coach Donna Newberry. Jane has a PhD in poetry and creative writing from the University of North Dakota and has published many poems and reviews of poetry and fiction in literary magazines. A native Iowan, she lived in the western and southern U.S. before moving back to the Midwest, where she is a professor at Muskingum University in Ohio.