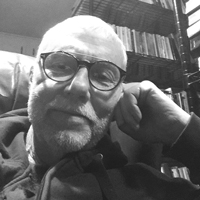 SOMETHING IN THE WATER
by Don Thompson

Some sons are born into ghostliness,
never quite there—unnoticed,
haunting the dark corners
of their father’s repute.
Their complaints seem to come from far away.

Others who are recalcitrant
and polished like brass on a yacht
go in for speed, baccarat,
and women whom they never impress.

Many do well—but not all that well:
mid-level career bureaucrats, corporate veeps
whose fathers ran the world.
They have to be pointed out to new hires
who feel vaguely let down…

Ted Roosevelt, an intimidated boy,
ended up an over-aged, arthritic brigadier
volunteering to land with the first wave
on Utah Beach.
Fearless—like his dad.

But TR climbing San Juan Hill
with panache in his blue polka dot scarf,
eyeglasses glinting, hat brim
rolled up on one side in the jingoist fashion,
no longer resonates with us.

His eldest son still does.  Under fire,
armed with a walking stick,
Ted disentangled an entire army
from its hopeless snafu
and got everybody moving inland—
only to die a month later
killed in his sleep by a heart attack.
**

Something in the Water
(William Saroyan)

Somewhere in early Saroyan
there’s a eulogy for San Joaquin water
that I’ve never found again
since first reading it as a teen,
barely beyond an obsession with Poe.

Once I drove up the 99 to Fresno
to see Willie’s boyhood home—
disappointed, of course,
because it was just a house, rundown
under its flaking paint
on a street as commonplace as mine.

Saroyan’s image also suffered wear and tear
through the years, from genius loci
to bitter drunk, gambler, slapdash ego maniac
alienated from his own flesh.

Nevertheless, opening an Aquafina now,
I remember drinking from irrigation standpipes
that gushed liquid light
with a taste that made every good thing seem possible,
and then running water over my head, exhilarated.
Saroyan got it.  He knew.
**

Don Thompson has been writing about the San Joaquin Valley for over fifty years, including a dozen or so books and chapbooks. For more info and links to publishers, visit his website at www.don-e-thompson.com.