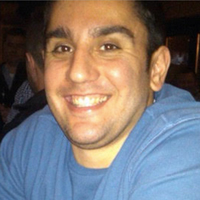 The bluish lights from the television were glowing from the bar. I was out to eat with some friends on a week night and there were several groups of people in the dining area. “Today, at a synagogue in West Attleboro, five people were shot. The gunman was arrested and found to be a member of the Aryan Brotherhood…” the news anchor stated.

“Wow, did you see that?” Kyla asked. “They really ought to do mental health screening before allowing people to have guns.”

“I don’t know if that’s going to solve the problem,” I said.

“It seems every time one of these things happens someone with a mental illness is involved,” Kyla said.

“I don’t know about that,” Rob replied. He and Kyla had been married for thirty-one years.

“Well, what do you think it is? They must have a mental illness,” Kyla said. “That’s what I consider it to be. It’s all kind of relative to me.”

A server walked by carefully with a simmering plate. I stared blankly at the steam rising from the freshly charred meal. “I’ve never harmed anyone and I’ve had schizophrenia for years,” I thought. “They know about my diagnosis… This is such a strange subject. Maybe she just doesn’t include me in the category of having a mental illness??”

“You know, I golf with a guy who was in the army. He says those guns are made for one purpose, and that’s to kill people,” Jose said.

“So what about our second amendment rights? We can’t just get rid of guns,” Kyla said. She took a sip of beer and stirred her frothy soup.

Rob placed his drink down on the wooden high top. “You have to remember the second amendment was put in place when muskets were the primary weapon. If the government wants to take over, none of us would ever have a chance. I think the automatic weapons have to be gotten rid of.”

“I agree. I think those guns are just too much. No civilian needs an automatic rifle,” Jose said. He fixed his golf collar and flagged the waiter for a drink. The waiter nodded and walked away.

“I just think these people who go on shootings have to have some sort of mental illness,” Kyla said.

I picked at a wooden knot in the table feeling like it should have been easy to remove. It remained where it was. “There’s a difference between having a diagnosed mental illness and a hate crime,” I said as calmly as I could.

“Well, I don’t know if I agree. Something has to be wrong mentally with these people,” Kyla replied. She took a swig of beer and placed the foamy glass down.

“Yeah, I agree they aren’t necessarily stable people,” Jose said. A plate crashed to the ground shattering in twenty directions. Silence pervaded the room. I could hear my heart beat pulsing in my temples.

“You can’t label everyone who does something wrong as having a mental illness,” I said. “Every time you attribute a hate crime to mental illness it misconstrues the situation.”

“How does it misconstrue the situation?” Kyla asked. “I think these people are messed up, is that not okay to say?”

“It’s not mental illness that’s causing these crimes though. It’s hatred and rhetoric. It has nothing to do with someone’s diagnosis,” I said.

“How would you feel if I said blondes are dumb when you’re VP at your company?” I asked.

“We are dumb though,” she laughed. “I don’t see why everything has to be so PC. You can’t say anything without getting in trouble.” Kyla picked up her burger and finished the last piece in a bite that seemed too big. The waiter carried away her plate.

“Well, I think when you use labels it affects the way people are treated and that’s what makes the difference,” Jose said.

“I still want to just be able to say whatever I want to. Why should I have to change for everyone else?”

“What is so difficult about changing the language you use; especially when it can make such a big difference?” I asked.

The blue lights from the television flickered as they switched news anchors.

Steve Colori has published seventeen essays with Schizophrenia Bulletin by Oxford Medical Journals and he has been featured in a number of literary journals. He has had schizoaffective disorder for thirteen years and writes a mental health column titled Steve Colori Talks Mental Health with The Good Men’s Project. Over the years he has worked hard to overcome the disorder and he has come to live by the words “To Improve is to Change; to Be Perfect is to Change Often” (Winston Churchill)