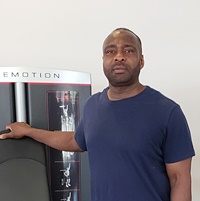 A River’s View
(A Brief Look Into Myself)
by T. M. Boughnou

T. M. Boughnou was drawn to the writers and thinkers of the ninetieth and early twentieth centuries: including D.H. Lawrence, Freud, Schopenhauer, and Fromm. After years of a dedicated reading and writing regimen and journal-keeping of his thoughts and observations of his daily routines and personal travels, he decided to take a college writing course at Harvard’s Summer School. Thereafter I began to write. He lives in the greater Boston, Massachusetts area, where I work as a wellness specialist. His literary works have appeared in: Mount Hope Journal, Peregrine Amherst Writers, Broken Plate Magazine, Vestal Review, Burning Word Literary Journal.