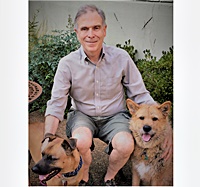 The light extinguished, yet the kinetic shock surged to my feet. The amplitude waxed, like whipped rope, each stronger than the last. I rubbed my feet against the sheet, back and forth, distracting my brain, knowing it will continue until I fall asleep hours later. The throb was rhythmic, like a metronome on a concert piano.

The sensations had started several weeks earlier; a neuropathic pain. Each night with the shorting circuits, I compared them to the night before, assessing for a change.

I saw a neurologist. He asked when it started. I had known him for years, we worked together as residents, our paths crossing, early in the morning, late at night. Tall, thin, with a British accent, he used my name in every third sentence, the last letter with a lilt that lifted it higher. I told him the sequence: an allergic reaction to naproxen three months earlier.  Required a visit to the emergency department. Forced to share a room there with a sick, coughing man for five hours. Developed the flu three days later.

A week earlier, the weakness became apparent when I was in my own office. I’m a geriatrician. I was testing an older woman after she had fallen. I had asked my patient to walk on her toes. I showed her what to do.

A simple task. A demonstration. My foot remained flat; I could not lift up. Heavy. Scuffed the floor. Then while walking my dogs I had tripped on a level sidewalk, pitching forward in free flight. The dots connected while my nerves disconnected.

At the neurologist’s office that day my bare leg extended past the sheet, like a corpse on a gurney. The technician joked about no one liking her as she strapped the electrode to my big toe. She apologized and threw the switch, sending a spark through the skin into the damaged nerve. The pain was quick, the muscle spasmed and then relaxed. Sorry. She said. Did it again.

Abnormal blood test. The neurologist referred me to an oncologist. We’d interacted over the years. Intense with a soft monotone voice, he tried to engage, missed his mark.

Said he was sorry this happened to me.

He probably meant it.

It missed its mark too.

The story was repeated: dates, times, symptoms, progression. I was worse. In just several days.

He ordered a scan. The technician warned of a warm feeling. He left the room. Threw the switch. A wave of molten heat washed through my body and passed like a wave at the beach sinking into the sand and left no trace.

There is a mass in your spleen is all he said

The Greeks thought the spleen was the source of bad temper. The Talmud references it as the organ of laughter.

Two days later I fell on a curb. Damaged my knee. Broke my leg. I vented my spleen with every obscene word I knew. I thanked the Greeks. I screamed with laughter to stop crying. I thought of the Talmud. People near me removed their children.

The gowned technician entered the closet-sized room and injected the radioactive liquid. The tracer sluiced through my veins.

Sunspots danced in my eyes.

I asked for the results.

Minutes later, in the reading room, the radiologist did not use my name, and brushed my hand with his. He commanded the console like an officer from Star Trek, eyes darting from screen to screen. He recited his internal monologue as I watched my images appear. A pixelated body pirouetted on the largest monitor, a slow-motion dance that went nowhere, and I expected it to vaporize and teleport to a galaxy far, far away. My numb, weak leg kept me there. The spleen laughed at me, and the mass pulsated as the marker filled it a brilliant red like an exploding star.

The crew cut captain picked up the phone. Dictated.

He wished me luck.

A cancer surgeon looked at my scan. Shook his head. “I can cut it out.” But he didn’t think it caused my symptoms.

Two months later, the wheelchairs at the entrance to the Mayo Clinic were lined up like the crutches on the wall of St. Anne’s in Quebec. Both serve as a place of solace and hope for diseases which have no explanation. My grandmother travelled to St. Anne’s in 1932 with a crippling arthritis. She left cured. At my appointment with the Italian neurologist, she shrugged her shoulders when asked about the mass. She wanted more data and my entire body was exposed to a sparking probe. Another physician did not warn me when she sent current. Muscles tensed anticipating the next jolt. The next day, I pretzeled my body on a thin mattress as the nurse inserted a needle into my spinal canal to remove fluid. I never told her it was the procedure I hated performing on patients when I was an intern

The Italian neurologist diagnosed chronic inflammatory demyelinating polyneuropathy (CIDP) and sent me home. An autoimmune disease. Triggered by the flu. Gotten from the coughing man. In the emergency department. After an allergic reaction. To naproxen.

Three weeks later I sank into the dirty lounge chair at the infusion center. I saw Don, a volunteer. I took care of his partner years earlier. He served comfort to patients. The veneer cracked when he saw me. Despair on his face. I received infusions of gamma globulin at the cancer center. Each week I saw the same people. Tethered to bags infusing poison through their veins.

I started to feel better.

I knew the others would not improve.

Thalassemia. An inherited blood condition. From my grandmother. To my mother. To me. I scoured the medical literature: thalassemia, spleen, mass.I ordered an MRI and diagnosed my spleen mass as benign. I laughed at my spleen. I sent a copy to the radiologist. Told him he was wrong.

Now the light extinguishes and my nerves hum, like being close to a power line on a warm summer’s night. The sheath around my nerves are worn. Broken.  I picture small cracks leaking electrons in pulsars. Sunspots flash beneath my eyelids and my body pirouettes as I fall asleep.

Robert Burns is a geriatrician and writer. He received a MA in playwriting from the University of Memphis. His plays have been produced in New York, Pittsburgh, and Memphis. His published plays, short stories, and essays have been published in Annals of Internal Medicine, Journal of the American Medical Association, Three Element Review, Punchnel’s, The Sun, and Pulse, and Health Story Collaborative. He lives in Memphis with his wife and two dogs, Parker and Woody.