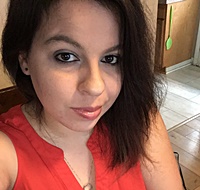 Mario awoke obstinately, “Today is the day!” he declared. Today he will travel down Main Street to the ice-cream parlor that cozily sat in-between the pizza shop and the insurance company. Mario will order his favorite chocolate malt shake and sit next to the window and watch. He will watch the cars pass by unaware of his presence, the trees sway with each breeze, the birds, and the children at play in the park across the street. Mario’s eyes caught a small bright blue hair tie on his nightstand. Emily. Emily was very special. As he began to reminisce, her cold pale eyes stood out amongst the memories. His hands began to shake as he ran them through his hair. He made his way down the hall to the elevator; tingles ran through his veins as he pressed the button for the first floor. He smiled ever so slightly to the three occupants as he made his way to the back corner.

The older lady wore her hair in a tight ponytail. She wore little to no makeup and no jewelry except for a simple wedding band. She smiled as she wrapped her arms around the little one who had a black headband and bangs that rested just above her brown eyes. She wore a pink skirt and a white butterfly t-shirt and beamed at him with curiosity. In the opposite corner of him, stood an older gentleman. The older man wore a black floor-length peacoat, black polished shoes, and a flat cap. He held a cane as he stared at Mario with cold gray eyes.

Decidedly, Mario placed his hands into his pockets to keep them from shaking. Looking down at the ground, he noticed the white mosaic floor as he listened to soft music that played overhead. There was a ding as the elevator came to a stop. The doors slid open, and the two ladies hurriedly left the room. However, the older gentleman remained, silent and unmoving. As the elevator closed, Mario began to shift his weight from one foot to the next. Mario looked at the doors, then around the room. Mario stood there frozen, with his back pressed against the cold metal, “Who are you?”

The soft music continued to play; however, Mario’s heartbeat disrupted the calm atmosphere demanding action. Mario stared at the gentleman, wondering if his mind was playing tricks. The man continued to stare at Mario, never moving, never even blinking. Mario held his breath, afraid to move. He felt his heart pound against his ribs, his palms sweated, and the elevator seemed to stand still. Mario needed to get help; he forced himself to move. His limbs seemed slow and cumbersome. He pressed the red button with a ferocity he did not know he held. The elevator came to an abrupt stop, and Mario fell to the floor. The older man stood tall, smirked as he stepped forward, pressing the bottom of his cane into Mario’s hand.

Mario grimaced, “Damn it, who are you, and what do you want?”

The unknown man slowly squatted, his face inches away from Mario’s, “I am your worst nightmare.”

Mario gagged at the stench of his breath, “What the heck did I ever do to you?”

“I do not know who the hell you are,” Mario spat as he removed his hand from underneath the cane.

A loud sigh escaped the stranger’s lips, “Do you remember Abigail? How about Emily? Maybe Samantha will jog your memory?”

Mario gasped as he stared in horror at the strange man before him. After a moment of silence, “How?”

A low, menacing laugh erupted inside the elevator, “I told you, I am your worst nightmare.”

Mario’s body shook, “I loved them. I never once hurt them.”

Mario flinched as he tried hurrying to the corner of the elevator, praying help will come soon.

Mario gaped at the man who stood above him.

“I know where they are hidden.”

Mario covered his face as tears overwhelmed him, “I loved them. I didn’t want to hurt them!”

The doors swung open. A maintenance worker, and two police officers now stood in the entryway.

Mario, unaware of the newcomers continued to speak, “I will take them to you. You can see for yourself they are loved and well taken care of.”

“They are dead,” said the man.

The cops entered the elevator, “Take us to who?

Mario’s eyes dilated, “Samantha, Emily, and Abigail. Just please keep that man away from me!” he pointed upward, but no one was there.

The cops looked around the elevator then at each other, only to refocus back on Mario.

Mario felt his heart drop to the pit of his stomach as he realized the man disappeared. He will confess. If he did, he would be protected from his worst nightmare.

Angelic Hinojosh is currently developing her writing at Full Sail University. She resides in Ohio and gathers inspiration from the world around her.