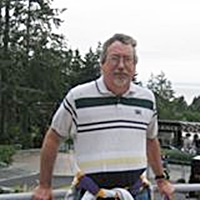 The tiny ballerina, her
summer run long over,
limbs brown and withered,
hanging hair disheveled,
bends stiffly at the hip,
shriveled hands stretched
to the tip of an extended toe,
frozen in a permanent pose of thanks
for praise of her last fall show
to her audience of one.

Chemotherapy is an attempt

to shrink a tumor and

When this round of chemo is over,

doctors will take him into surgery

to try to remove his pancreatic tumor.

of the head of his pancreas,

a part of his small intestine,

and his gall bladder, then

some human re-plumbing is done.

The surgery will be tricky,

because as shown by CAT scan,

his tumor has exited his pancreas

and effaces his portal vein,

without which no one can live,

but he has the best of doctors.

Recovery from a successful surgery

takes almost a year, then

he will have more chemo,

to try to keep the cancer from returning,

If it returns, the prognosis is not good,

as the surgery cannot be repeated.

So the questions are whether

his tumor is resectable and

his cancer will return in the

months and years to come.

Only God knows the answers,

the rest of us will have to wait

A solitary stroll along a balmy coastal shore

will provide some calming to a sore knee’s crepitation.

Trod the wet white sands for a long hike of several miles,

to muscles that have not been used for years in such a fashion.

Often stop and squat down for a pretty bit of flotsam,

so as to incur all of the necessary flexion;

the beach’s slanted slope will bend one leg more than the other,

but the return trip back will let the bended knee recover.

Once the trek is over, plunge headlong into a wave,

and breathe in deep the sea air for the total mass retain.

The King Is Dead

Once I was the King

of my own private forest,

and when I roared,

Now I am toothless,

my growl is a whimper;

their disdain and contempt

that I have earned

I am often told

what not to say;

my words and deeds

my thoughts worth naught,

I ingest what I’m afforded;

I must not have or take

an extra piece of cheese;

my red meat is restricted:

I am not allowed to eat

that no one else wants.

When cinema and other media

to the point of being bloody

and other nefarious do-gooders

voiced concerns that these excesses

would inure children to violence,

and that mayhem and murder

as a sociological phenomenon.

The solution they derived

was the banning of toy guns;

but for as long as there have been steel barrels,

and projectiles to fire at foes,

imagined from their hands and limbs,

fingers with which to point pistols,

hands and arms to lob grenades,

and shoulders and arms to position and fire

Perhaps we should have considered

the cutting off of fingers and arms.

We then gave the children

and they have developed this technology

so spectacularly that entire villages,

can be destroyed and stricken from

existence in a single sitting.

It is no doubt a coincidence

that some thirty-plus years later,

that violent crime rate has exploded,

and the murder rate is through the roof.

Now there have been invented

that will take the user into

a new and foreign reality

which can be changed

to a different locale

by adjusting the settings.

This particular form of play

than the ingestion of certain

tropic plants for the seeking

of new and wildly different

but nonetheless constitutes an overlooking

of a fundamental truth of human

physiology and its kindred spirit:

that we all experience virtual realities

of all human emotion, behavior, and/or

state of being, each and every time

we lay down our heads to sleep.

We sometimes carry over these

but it is the individuals that cannot ignore

thrumming within their heads

when not sleeping that are truly

John Lambremont, Sr. is a poet and writer from Baton Rouge, Louisiana, U.S.A., where he lives with his wife and their little dog. John holds a B.A. in Creative Writing and a J.D. from Louisiana State University. He is the former editor of Big River Poetry Review, and has been nominated for The Pushcart Prize. John’s poems have been published internationally in many reviews and anthologies, including Pacific Review,  Flint Hills Review, The Minetta Review, Sugar House Review, and The Louisiana Review. John’s full-length poetry collections include “Dispelling The Indigo Dream” (Local Gems Poetry Press 2013), “The Moment Of Capture” (Lit Fest Press 2017), “Old Blues, New Blues” (Pski’s Porch Publishing 2018), and “The Book Of Acrostics” (Truth Serum Press 2018). His chapbook is “What It Means To Be A Man (And Other Poems Of Life And Death)”, published in 2014 by Finishing Line Press. John enjoys music, playing the guitar, fishing, and old movies. He has battled pancreatic cancer since 2018.