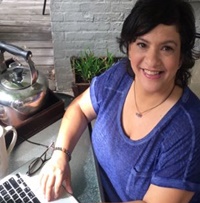 Parrot in a Key West Laundromat

A parrot is perched on the rod of a laundromat cart,

its multi-colored feathers bright as the florescent lights above.

Its head moves about as if counting those who fold and those who wait.

Islanders and tourists don sweats and sip espresso on this chilly afternoon,

much too cold for locals, pleasant for those of us who fled a deep freeze elsewhere.

as the aroma of pork and plantains drifts through the shared wall of Sandy’s take-out.

A sun-beaten man whistles, extends his arm, the bird descends and is taken away.

Both disappear from my sight, but the bird stays on my mind as I wait and wait.

Bird-less, the man speaks to a woman who washes and folds for others,

their language, Czech or Polish, is thick and consonant heavy.

I wonder how well the parrot understands the tongue of its caretaker.

The feathered fowl, now on a van’s side mirror, surprises me with hello.

I snap a photo of the majestic bird and whisper good-bye.

flow through my veins

as conga drums play the beat.

My parents and I pose for a photo

in front of the Southernmost Point buoy.

It declares: 90 Miles to Cuba.

So close and yet so far.

Tourists stand there too,

pointing from one island paradise

to the next – the one stricken

since my parents chose freedom,

but at times I feel exiled,

yearning for an unknown homeland.

My corazón is linked to an island of palms

and moves to the back and forth of the mambo.

Strolling by the Cemetery on Olivia Street

The rooster crows to awaken those who slumber

or to make the rest of us take note,

but at this spot, no one will rise from his call.

How long has he been practicing this futile routine?

Still, he ascends to the roof of a hut and crows once more

while a circling hen below thinks him a fool for trying to rouse the dead.

Corporals Mumford and Spence from World War I

are joined by vets from the Second, Korea, and Nam.

All rest here and none will stand at attention.

Lucy and Malcolm were greeted at the pearlies in the fifties,

and now, a shiny white railing, two chairs and the Virgin await guests.

I wonder how often their children, now old too, came around.

I sigh at the spot where Lisa and Casey are identified with Gone to be an Angel.

and for another whose teen daughter departed by choice.

But the residents will not react to the sweet gestures.

The rooster crows a third time, but I do not see him.

Did he slip through the black steel-barred fence to alert others?

I must also be on my way to start anew or muddle through.

Will I rise and ramble or wait for a fourth squawk?

Adela M. Brito is a Cuban American who was raised in Miami, spent sixteen years in NYC, and now resides in Nashville, where she teaches composition. She holds an MFA in Fiction from the University of Memphis and is a professional editor of fiction and memoir. Her work has appeared in Hieroglyph, StoryBoard Memphis, Moko Magazine, and The Acentos Review.