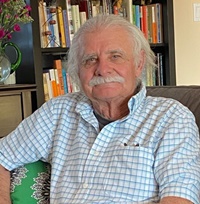 I’m happily married 41 years to a prize-winning published poet, Becky, a patient English major who winnows out my bonehead mistakes before my stories go to an editor. Becky and I ran a public relations business for five years, Decent Exposure, Public Relations. We had an eclectic lineup of clients including home builders, university authors, art galleries and new age philosophers. Currently I serve as president of our town’s literary nonprofit, Benicia Literary Arts. We recently published an anthology of short stories, Carquinez Review, available on Amazon and local bookstores. It was an education being on the other side of the publishing desk (figuratively) working with submissions and contributing writers. I’m pleased to say we published on time and even produced a small profit, not bad for a team of volunteers.

My first publication was a non-fiction annotated transcription of letters written in the 1850s by a member of the DuPont family, a prominent East Coast family known in its early days for gunpowder manufacturing. I was working as a research librarian at the Eleutherian Mills Historical Library in New Castle County, Delaware and discovered the letters in the Library’s archives. The letters are from San Francisco during the gold rush era. I liked the story behind the letters because it describes the downside of those bustling times. The main character, Robert Lammot, married into the DuPont family and hoped to get support from his in-laws to foster a successful gunpowder supply business in San Francisco.

Below is an excerpt from the article’s introduction, published by the California Historical Quarterly.

The business letters of Robert Lammot and his associate, Rodmond Gibbons, span the years from 1852 to 1854 and describe in rich and sometimes painful detail the fortunes of a young businessman, Robert Lammot, who traveled West intent on securing some of the fast money to be made in the California gold rush. In purpose, Robert and his San Francisco-based associate, Rodmond Gibbons’, letters were reports to an eastern supplier on the status of their goods and finances and appraisals of future prospects. But for latter-day readers they recreate with humor, optimism, and, finally, resignation the anticipations and disappointments that characterized business life in the boom and bust economy of the remote new market.

My latest publication is a novella, Ransoms Are For Amateurs, a dark, crime-suspense page turner. The initial idea began in 1985 while working as a technical writer in Santa Clara, CA. During a lunch break I was musing about what would be the best possible ransom scheme. I decided the most successful ransom would be not to employ a ransom at all. Once I had a scenario I was satisfied with, the characters, plot and narrative grew around the ransom scene.

The initial drafts of Ransoms developed quickly but was sidetracked by family and job-related priorities for years. Sometime in the late 90s I unearthed the manuscript and rewrote it with the help of an online collaborative authoring and review website called Critique Circle. My colleagues at CC were a big help putting new life into the manuscript.

I write drafts faster than the final product. The drafts are sketchy with a lot of holes left to fill in, but the important achievement is coming up with a conclusion. Once I have the end figured out everything leading up to the end moves along. On a good day I probably get in a thousand words of draft material and less than half that for finished copy.

A lot of my ideas come while sitting with a notepad nearby and staring at nothing. Watching the paint dry, as my wife says. It’s kind of a meditative approach. I’ll run through scenarios in my head then jot down profiles of characters, word and descriptive options and setting ideas.

I enjoy working with my hands, especially rock, or dry-stack wall building. I’m a failed gardener, but I also like to play in the dirt.

I call my favorite writers the four Johns; Updike, Cheever, McFee, and Irving. I also enjoy Anne Proulx, Saul Bellow, Wallace Stegner, Michael Chabon, David Eggers and too many others to mention.

A prequal to my first Adelaide book, Borders in Paradise. The novel starts at the beginning, when BIP’s principal characters were children in Central Texas. It covers their upbringing and ultimately their resettlement in Hollywood, California during the 1930s. The story includes a true-life adventure of two boys riding the rails from Texas to California. I learned about ‘catchin’ out’ from stories told by my father and uncle.

Giants is the story if an ill-fated scientific expedition to Patagonia in the 18th century. Five scientists in search of the mysterious giants that were reported by Ferdinand Magellan during his circumnavigation in 1519. The story is inspired by Magellan’s report, written by his supernumerary, Antonio Pigafetta. Pigafetta describes: “When the giant was in the captain-general’s and our presence he marveled greatly, and made signs with one finger raised upward, believing that we had come from the sky. He was so tall that we reached only to his waist and he was well proportioned.”

My writing is eclectic, so I expect I attract a variety of readers. They are primarily adults interested in science fiction, romance, historical fiction and literary fiction.

My only advice is to be resourceful and don’t ever think you’re done. Writing, like many professions, is a progression of plateaus. You get a story written? That’s a nice plateau, but it’s only the beginning of your professional growth as a writer.

Nobody Wants To Read Your Sh*t. That’s the title of a great primer on writing written by a talented author and screenwriter, Steven Pressfield.

“When you understand that nobody wants to read your shit, you develop empathy. You acquire the skill that is indispensable to all artists and entrepreneurs—the ability to switch back and forth in your imagination from your own point of view as writer/painter/seller to the point of view of your reader/gallery-goer/customer. You learn to ask yourself with every sentence and every phrase: Is this interesting? Is it fun or challenging or inventive? Am I giving the reader enough? Is she bored? Is she following where I want to lead her?”

I like historical fiction. I was a history major and the academic discipline still runs through my literary veins. I’m also fond of science fiction for the sheer fantasy and I’m always looking for ways to insert humor into my stories. I can’t tell you how many books I read. Not enough is a good answer. Among many titles, I’m reading Station Eleven, by Emily St, John Mandel, and Coffee Killed My Mother, by Adelaide writer, Donna Koros Stramella.

I’m character and setting driven. One publisher told me she loved my heroes and I consider that to be a significant observation. I like to develop strong female roles and other characters that are helpless in the throes of life and pathos.

My settings are important not only as backdrop but as indicators about how and where the plot is going.

Today’s publishing industry is mysterious. I belong to numerous author groups and none of us really know what’s going on. My wife used to be publicity director for The University of California Press and her descriptions about publishing in the 70s has no relation with what’s going on today. Authors need to be self-reliant and adaptable. I find it’s best to stick with familiar social media outlets and tools and forget about trying to keep up with everything that’s new.