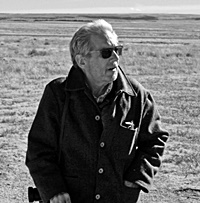 West is the dream where the light ends. It is the place of redemption, an earth torsioned and twisted in sworls and declines that dead end or lead infinitely to the last light. It is the destination for little boys and those who never matured, the place to escape and pretend someone else. Red and yellow rock balance on the horizon in dizzying heaps and the common lack of water shimmers in the air. The air is soundless during the day and alive with life at night.

West is the American dream, a longing. You can come close to that dream looking at Manhattan from Brooklyn beneath the bridge, looking west, but the glitter of electric light cannot replace the density of stars in a true western sky.

In the dream she now is her true age and apparently fit. She has come again during my angst, my struggle with life in late years and with sons who will always be my children, they too unsure about where this all taking them. The unsteady ground of a country in turmoil and sickness as if there is an earth tremor that is incessant, shaking sand to the quick, boiling water that was a moment ago a placid pond.

She appears across a room, for the second night, and waves at me apprehensively. Then she walks over and takes my hands and says hello, I am here again, you called. I did, unwittingly. The sorrow called, the driftlessness.

Her hair is blonde now, colored, full. She is trim but fleshed out, yet steady on her heals. She is middle aged as she should be. And me? I have no idea of what she thinks I look like but she did recognize me from across the room. Perhaps the other dream folks here forewarned her of my presence and she is too gracious to signify anything other than instant recognition. She does not scold me like she once did. She is worn a bit, maybe tired, but upbeat about a trip to Moab, to Arches. Can you go?

Good to go I say, and mean it.

There are four others, all familiar to me from other lives. My wife is standing not far away and heard the exchange and does not pull the plug on it, while an old Land Rover, an ancient Defender-like thing but with a second story deck, pulls up, and we get on board the magic bus to Moab.

Why Arches, the red rock desert of my dreams? Why these six? But why did she show up now?

She only appears in my dreams when necessary, when the world is overwhelming me, or when perhaps, it overwhelms her. So, now? Two of my sons are finding life difficult, one with a partner, one with himself. Boulder looks like an inferno in the photographs one sends me. Everyone is nuts from the health crisis, secluded, bored, dreaming bad dreams incessantly. The social conscience of our country has become a cesspool of right and wrong and guns are being drawn, governors’ offices surrounded by masked men.

The Rover sputters up and we are off, west. Due west from Denver on I-70 to the Utah border and over and then south at Cisco, a mess of a town on the flat red dirt, coming in the back way through Castle Valley, along the Colorado River. But at Cisco, I wake up, and west is east and she is gone, unexplained, silent.

The rest I make up as if to make truth of it all. I continue on to Moab and stop for a drink at Woody’s, but the old Woody’s without windows, a miners and river rat bar. Drug deals optional in the parking lot. Tough women not optional.

Years ago when I would angst-out the redemption was an annual trip with two friends to Moab and ten days into the canyons or the Henry Mountains, phoneless, invisible, and the scum of everyday life blown clean by wind and sand and the ground would straighten out my back to where I could not sleep in a bed for five days upon the return. Is this that? A double cleanse with her and the desert, a peace-offering from above, a message through the airwaves.

West, the desert, for this little boy.

I cannot construct our dialogue in the truck and cannot hear the others speak. It is a silent journey of eyes and smiles, hand holding as if mother and son, sister and brother. She strokes my hair for a time and I sleep, soundless, dreamless within the dream, and then I feel the washboard road through Cisco and hear the river through the sliding Rover windows and we come to Woody’s.

I hear conversations in Woody’s from the old days when Doug and Lu Chow and I roared in thirsty and dirty and sat facing the door. But I hear, cannot construct or invent, any talk from this trip. Again simply eyes and smiles and she reaches across the table and takes my hands. I once wrote in “South” that “I realize I am the caretaker this time.” No, not this time. I am being cared for in an unknowable way and she strokes my fingers with hers, freeing them, they jerk with electricity or perhaps ALS.

The six of us go to the River Canyon Lodge on West 200 North Street and sleep in three rooms. She is already in bed when I am ready and I get beneath the covers and she holds me, whispering words I cannot create here. At 2:00 AM I am awake and reading under a dim light in a corner chair and she wakes and says let’s go for a ride. She has the keys to the Rover and we go west out of town past Arches and turn on the road into Canyonlands National Park, but she turns into Dead Horse Point State Park and we wind our way to the end of the world overlooking the crick in the neck of the Colorado River two thousand feet below and beneath a carpet of light that has come from the distant past to get here.

It is summer and warm but a breeze chills me so she holds me and I hear in my ear the words I will only come when you need, but you will not need me any longer. She pushes me off the ledge of rock and I fall, floating, then flying, soaring on an updraft, and never hit the ground.

It is not an act of revenge or spite but an urge to make me fly. My spine is alive with voltage as I write this, make it up, and it is so.

That was the dream part I missed when I awoke so I created it, and it is so.

The dream of west is a child’s dream, a boy’s hope for a future not like the reality that drowns him at rest. West is the dream where the light ends, but once there it is the place where the sun rises and begins the day, to set further west and further west again.