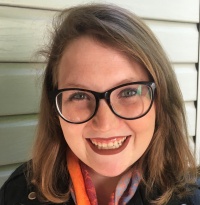 Mud deluging between my
toes, up my legs, splattering
into my hair, lifted
not an inch above murky

water, tangled with cordgrass,
reaching alongside my invasive
limbs, all of me excavating
this Dauphin Island playground

for annelid worms, marsh
periwinkles, or even a hermit
crab if I’m lucky, like my mom,
hollering for her dad

to pull an eel off her trot line
just to find that eel was a
bass as big as she was, which
she wrestled onto the pier, as

her dad held the net, insisting
she unhook it herself, so,
she severed the meat from
the bass’s cheek, gill plate dangling,

then she hightailed it to her
uncle’s, who helped her spoon
off scales and send one split
up its center, the guts ballooning out.

Clumps of bulletins
clamped between my arm and side,
trays of shredded bread in one hand,
the cup of Welch’s pinched
between my elbow and chest,
one hand free
to tuck hymnals back into their slots,
I display a rehearsed smile
as I slip past congregants,
dodge a hug with a handshake,
pass the bin where I dump the bulletins,
outside to ditch the sacraments.
I pivot—a breeze,
free us for joyful obedience.
But on the Hudson,
my face would lift to sloping branches,
my hands reaching,
mouth forming the Apostles Creed,
and also be with you,
the noon bell chiming from a distant city.

in a double-seal bag, wedged between
a five-dollar, four-cheese, stuffed-crust
frozen pizza for a cancelled party and
three two-dollar thin crusts for the weekend.
I don’t know how to cook

a chicken thigh, or the half-bag of
brussel sprouts, or the Ziploc of corn and peas.
She would have whipped up some sort
of lemon-garlic cream sauce or a
one-pot stew. Her crumpled buttermilk

pancake recipe hangs to the door
by the magnet we got in a souvenir shop
in North Carolina that time we ran
out of gas and someone stole her phone.
Sifting through the remnants

in the fridge, I hope
for a secret stash of our favorite
pad thai in a Styrofoam box
towards the back, but find instead
one apple in the crisper drawer.

I toss Ramen in the microwave
and put the dishes up the way
she taught me, the cups facing down.
I load the dishwasher how she
showed me, the forks facing up.

Ashley Tippit is an English Graduate Assistant at the University of Alabama at Birmingham. She received her Bachelor of Arts in English from Birmingham-Southern College. She is currently most passionate about developing and publishing her writing, especially in the genres of creative non-fiction, children’s/Y.A. literature, and poetry. Her research interests include gender and sexuality studies, mental health, Marxist literary theory, ethnic studies, and environmentalism. She ultimately hopes to sustain a career as a writer and become a children’s/Y. A. editor or teach at a college level while overseeing a writing center.