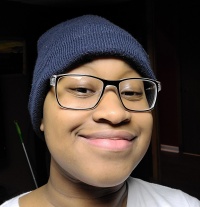 The red-nosed boy stole half of my soul. His dark, empty eyes stared up at me, unblinking. He had dark circles underneath his unmoving eyes and a scar trailing down his pale, bony face. I thought he was a damn mannequin at first until there was a faint rise and fall of his petite chest. As interesting as he was, I had a mission. A mission to get past the boy who sat Criss-cross applesauce in front of my objective, the chipped door.

For ten minutes – ten bloody minutes – the boy and I stared into each other’s souls. I saw his soul void of any hope; he saw my soul bombarded with joy and optimism. He did not like me. I didn’t fancy him either. The silence was killing me. Well, the silence of humans conversing. I would be lying if I said it were completely silent; the cicadas were hidden inside the overgrown grass surrounding us, buzzing loud enough for God to hear. To end my torture, I spoke to the boy.

No response. Not even a blink or a nod. Nothing but silence in return.

This went on for another grueling twenty minutes. I was being nice and patient. Talking to that bruised boy dressed in tatters, enveloped in a stench that puts cow manure and wet socks to shame, he was glad I didn’t throw him out of my way.

Maybe he would get up to use the bathroom, maybe he would scooch his butt to the side, maybe he would keeve over and die. Anything could have happened to that boy and I would have cared less! I wanted to be past that door and inside the comfort of my new abode. The abode that holds a promise I must fulfill. But, patiently, I waited.

I waited until it had almost reached an hour. Almost sixty minutes of a draining staring contest.

The red-nosed boy still had not blinked once. A cold gust of wind whipped his unruly golden locks all about, yet he was unmoving. Nighttime was draping its cold blanket over my body. Snot steadily creeped past my, most likely red, nose.

I took in a deep breath. Inhaled the stale, stagnant air and huffed out an exasperated sigh.

Simply, I lost it.

“You blasted child! Move!” I stomped my foot. “I’m tired of waiting for you. Get up or I will throw you over this porch, pesky runt!”

It is then that the red-nosed boy’s chapped lips curved into a smile. His bones cracked as he stood, the porch steps creaked under his bare feet as he descended.

The boy paused and slowly turned to face me.

“Of course, I am human,” I said, crossing my arms.

“Good,” said the boy as he continued to walk his path. “Because your kindness terrified me.”

Allissa Barker spends her days babysitting young children and volunteers to help her community during her free time.