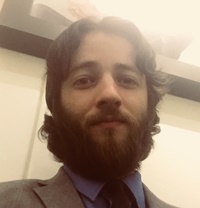 There was only one option; I had to save my platoon. I screamed with everything I had, “Grenade, everybody down!” Looking back at my best friend Johnny Boy, I tossed him my dog chain and dove toward the grenade. Was this the wrong move? Could I have saved them all and still survived? The battlefield covered in bodies, and the day had turned into night. Scorching heat, gunpowder filling the air, low on supplies, the men were worn out. If they survive, I consider that a mission accomplished.

John, aka Sergeant Strong, clasped his hands tightly on the dog tags, and with his thumb, rubbed the engraved name. “You fool,” cried John. “There had to have been another way. It should have been me. Fuck! God no! Fuck!” he screamed. There is indeed no telling what could have happened. Everything happened in an instant. I went with my gut reaction. And so, my squad, my brothers, can live.

Five years later, my boy Johnny, a quiet, muscle-headed man who still wore a crew cut, married a lovely blonde-hair, blue-eyed, law school graduate named Courtney. It had been a difficult five years for John. After leaving the service, he had no idea what to do with his life. He worked, yeah, but he was on a downhill routine. Drinking and pills seemed to gain control of his future. I never wanted this for my best friend. This is not why I sacrificed myself. My work is not complete. He still needs an angel. “God, lend me a hand here,” I said aloud.

“John, where did you go?” called Courtney. “John? Are you alright?” she continued asking. Courtney searched, frantically, through the house for her husband. Nowhere to be found, she looked in the garage because some nights he would be working on his Mustang 64 ½. She knew he loved his car but often wondered what kept him up these hours. By curiosity, Courtney switched her backyard lights on and stepped out onto her balcony. From the railing, in the distance, all she saw was the shadow of a man hurdled oddly on the ground. Courtney approached him with caution and lightly grasped his shoulder. “John?” she exclaimed as she shook him just a bit. He turned abruptly and threw his left arm, shoving Courtney to the ground. He screamed, “Everybody down!”

Shaken by what took place that night, Courtney walked John back into the house. “John, what was that?” Courtney asked. “I cannot tell you how sorry I am. I do not know how I am supposed to live like this,” he replied. “It has been five years and counting. I find myself in this realistic nightmare, and the single moment is repeated, over and over in my damn head. I cannot stop remembering.” “Remembering what?” asked Courtney. John looks at his wife and bursts into tears and says, “Babe, I am all sorts of messed up, and I have seen some things that words could never explain. All I want is for you to be safe, and I feel like I keep putting you in the way of harm.” Baffled by the way her husband is speaking, Courtney quickly stops him from continuing. As she hugs him tightly, Courtney expresses, “You are not a danger to me. I could never understand what you have gone through, but I am not so perfect myself. I have loved and lost as well. Some days are not always easy, but Hunny we, are going to make it through this, and anything else, together. Just as I already promised you.”

The following morning John and Courtney started their morning as usual: with a cup of hot coffee, breakfast, and a menthol cigarette to follow. While overlooking the yard from their balcony, they sighed and together said, “So what are we going to do?” Courtney looks at John and mentions, “Well, I know a woman who is a therapist; she may be able to help.” “I guess that is a start. I will try anything at this point,” responds John.

Dr. Andrea Anderson was able to take John right in the next day. As John now sat face to face with Dr. Anderson, he remained silent. Dr. Anderson begins by introducing herself. She works around him and eventually asks John, “What happened the other night?” Rather than answer the question, John shrugs, tapping his foot loudly, faster and faster as his eyes glance around the room at all the books on the shelves and certificates framed on the wall. “When did these episodes begin?” asked Dr. Anderson. John furiously responds, “When did my episodes begin? You mean, when did I start seeing my best friend get fucking blown up repeatedly in my mind? There was no time for goodbyes. No more memories. Just the constant reminder that it should have been me. I could have saved him.”

Saddened by what John was sharing, Dr. Anderson asks one last question before concluding their session, “What is your happy place?” In deep thought, John reflects what comes to his mind first. It was not the garage working on his car; that was just a distraction for everything else in his head. “The one place in this world that brings me happiness is Chester’s Burgers, off Ocean Avenue,” he replies. Baffled, Dr. Anderson simply says, “Okay, well, tell me that story and why that is your happy place.” He looked up at her and said, “You see, ever since we were children, my best friend James and I would get burgers with root beer floats there. We went with our mothers and continued the tradition into adulthood. It did not matter how old we were. It was all about our bond, and when we lost our mothers, we carried each other through the rough. Literally, and to the very end. To top it all off, I did not return there until five years after he passed. I was at my lowest of lows, and the one day I decided to return to Chester’s Burgers, the most beautiful of women walked through the doors.”

Time was up, but Dr. Anderson allowed him to continue. She asked him, “Is this where you asked for her number?” He replied, “That is just it; I looked up at her from a short distance with my mouth full, just awestruck; and she approached me. No, she did not just up and give me her number. Jokingly she said, ‘Hey umm, is that a root beer float? Aren’t you a little old? I’m just teasing you; they are honestly my favorite.’ I just laughed. I had not laughed like that in a long time. I offered for her to join me, and now we are married. I never thought I would see the day. She must have come from the heavens.”

Matthew Fontenault is a 28-year-old from New England attending Full Sail University to pursue his dream of becoming a professional writer. He is a loving father, and in his free time, enjoys music and video games. He hates the cold, so he currently resides in the Sunshine State.