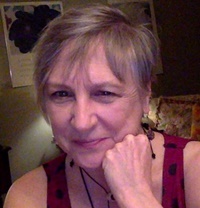 She sits in the wilderness of her heart, once again balancing the dinner plate on the arm of the sofa, watching the six o’clock news. Sometimes she wipes away just a couple of tears, moved by the stories of death and civil unrest unfolding around her, yet so removed from human interaction. Connection with others during a pandemic is rare.Her tears have almost dried up like the stream behind her house, mud where small fish used to dine, dust forming where clear water once flowed; it was a long hot summer. No lover has touched her heart in years. No deep emotions have been allowed to seep in.

Her lover left her four years ago. She felt he was an honorable man. He could not let his family become a wilderness. There were circumstances he could not ignore.

He was a music man; she loved him even though he had no wealth to give her except his gaze and understanding. He needed to know her, to touch every part of her being. She trusted in the luxurious garden of their bond as truth and he told her he did too and held her close.

When she met him she hadn’t loved in a long while. He had begun to mend the deep cracks in the foundation of her soul that had first made her heart a wilderness. With him she believed again in cultivation, growth, and color, and scent, growing fields of flowers. She saw them vividly deep within her imagination. Lavender, yellow and pink blooms yearning to be picked, savored and placed upon their table. Even now she can’t forget the deep watering she had received in their short time together.

The new wilderness within her did not appear suddenly it took some time for the flower fields she had grown with him, the ones that filled her with life, to become thick with strangling growths of weeds. She grew tired of hoping he would come back to her. Keeping an open path for her to travel alone became too difficult a task when   no other cared to walk it with her, to her, because of her, for her.

Each morning and evening she drenches her skin in expensive creams. Hope still blooming that someone will once again feel its suppleness. She knows people have visited, masked faces staying distant like the night spirits taunting you with pleasure only to disappear at daybreak without fully making contact. They buoyed her spirit though only like plants watered at the surface. Her roots could not grow deep enough to sustain new blooms. Human closeness is out of reach, yet she craves it like fire in a snowstorm, like the taste of love.

The wilderness has grown around her again, human connection not only hard to find but unsafe as well. Now she covers the wilderness of her heart, just a bit bigger, with the script of Life, hovering in her preserve while the world explodes around her and fear becomes her partner, watching the nightly news.

Professor Emerita Sandra M. Perez, Towson University Department of Dance began studying creative writing after retiring from a lifelong career as a professional Ballet and Modern dancer, and Arts educator. Sandra’s writing reflects her perspectives as a human, child, woman, mother, artist, educator, and mystic.  She lives in Maryland among nature with her cat Phoebe. Sandra continues to teach Wellness through Dance, study tarot, and to pursue her lifelong passion of telling stories through movement and words.