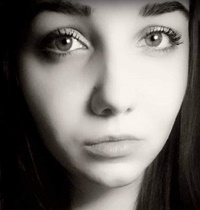 The Smiths sat across the small, iron-legged table from one another, and Marilyn’s eyes were heavily focused on the smudged glass topper. She turned her gazed to the partially open sliding door that led to their hotel room. Inside the room, between two twin beds with matching soft striped quilts and stark white pillows, a large, metallic pink, heart-shaped balloon floated. Happy Anniversary, it read.

Victor snapped his fingers in front of her face, snapping her back to reality. “Are you listening to me?”

Marilyn turned her head back toward him. Her striking green eyes met his deep, chocolate brown ones and she smiled. “Of course I am, darling.” She closed her eyes and took in a deep breath, letting the pleasant spring air fill her lungs before exhaling. Her eyes opened and her attention went back to the balloon.

A look of confusion crossed Victor’s face. “Are you alright, Mare?”

“Splendid,” she replied, her voice was dreamy and nonchalant.

“Are you going to say anything about this?”

Marilyn extended her arm, and her fingers brushed the crimson petals of a rose in the vase on the glass table. She pulled it out of the vase and pulled it close to her face, inhaling the scent. “I splurged a bit for the anniversary bundle. We have champagne arriving in a few hours. Chocolate covered strawberries as well.”

Silence filled the air between them.

“Mare… please listen to me. I am so, so sorry it happened like this. I wanted to tell you sooner, but it never felt like the wrong time and you were so excited about this trip. I couldn’t take it anymore. I just felt so-”

“Guilty?” She chuckled and started plucking the petals from the rose. One by one they fell to the brick under their feet.

“You’re my wife. It is our fifteenth anniversary and here I am telling you I have been cheating on you for the last two years. Did you not hear what I was saying?”

Marilyn remained quiet until the last petal fell. One lone rose remained in the vase. She stood and dusted the front of her skirt, knocking two petals loose that slowly drifted to the rose graveyard next to her chair. She gave her husband one last look and walked through the sliding glass door.

Victor hopped to his feet and followed close behind her. “Marilyn? Why are you acting so weird?”

Marilyn walked around the room, her hand brushing every surface. First, the polished walnut dresser with intricate gold detailing around the knobs. Second, the beige walls that held a texture much like the silk crepe blouse she had worn this day. Finally, circling back toward the sliding door where Victor stood, she brushed her fingers over the royal blue and tan striped quilts that adorned the two beds.

Victor huffed in annoyance and approached his wife. He grabbed her upper arm and shook her slightly to snap her out of her trance. Her eyes met his and he dropped his hand back to his side. They stared at each other in silence, neither quite sure what to say.

A full minute passed before Marilyn burst into laughter. She collapsed onto the bed in hysterics and covered her face as her laugh turned to much more of a cackle. Victor stood at the foot of the second bed, eyes wide and mouth agape at the scene in front of him.

“I… can’t… believe,” Marilyn barked out between breaths. She continued laughing and her face turned a brilliant shade of red. “I can’t believe this is happening!”

Marilyn sat up on the bed and took a minute to compose herself. She cleared her throat and shook her head. “I can’t believe I spent the last fifteen years bending backward to make you love me more. I honestly don’t even know if I like you as a person! You’re arrogant, selfish, clearly a moron if you think I didn’t know you have been sneaking around with your assistant for the last three years- and yes, I know it has been three years, not two- and… and look at this ridiculous room! I spent extra for this bullshit. I mean, I know there is a hot tub in the other room but come on. Totally not worth it!”

Victor moved toward Marilyn and she threw up her hand to stop him. “I’m sorry, Marilyn. Truly.”

“No Victor, I’m sorry. I should have left you seven years ago. The first time I realized our marriage was dead.”

Victor swallowed hard and looked down at the plush brown carpet. He reached for his suitcase and pulled it from the bed. He moved across the room with his head down until he arrived at the door. Hand on the knob, he turned back toward his wife. “I will leave my credit card on file downstairs. Order anything you want. And Marilyn, I really am sorry.”

Marilyn stood from the bed she had planted herself on and sauntered back outside to the table they had been sitting together just ten minutes before. She retrieved the last rose from the vase and went back inside the room, stroking the petals as she moved.

She hopped back onto the bed and pulled a sheet of paper from her bedside table. She lifted the receiver of the phone next to her bed and held it to her ear.

“Hello, room service? Yes, what is your most expensive wine and most expensive meal?” A grin formed on her face as she listened to the response. “Great. I will take two of each. Billed to Victor Smith, please.”

Marilyn twirled the rose in her fingers and looked at the balloon beside her. She smiled to herself and pressed a thorn from the rose into the balloon, which emitted a loud pop and its carcass drifted to the carpet.

Trinity Summitt is currently a student with Full Sail University, majoring in Creative Writing. She previously graduated from Ball State University in 2015 with two bachelor degrees in Criminal Justice and Sociology.