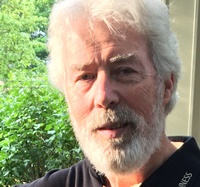 While others went to the Park to see and be seen, to flirt and promenade, Peter did not. He preferred to ride his bike past the long meadow where the soccer players were cursing their grass-stained knees, down past the duck-pond where the young Puerto Rican girls were throwing beer bottles at the honkers who hid in the weeds, up across the highway bridge where little kids from Duncan Garden Projects peed on cars passing underneath, down onto a dirt path that led through the deserted rushes which grew so high that they swallowed him whole, until finally he left the noisy city behind.

Peter followed the dirt track as it got progressively quieter and only the birds started up at his approach. The redwing blackbirds rocketing out in alarm then settling back down on their nests in the rushes. The males hanging from the reeds sideways, their slight weight swaying the slender shoots forwards and back all the while their eyes darting about in search of dragonflies and cicadas.

Secret Avenue.  A neglected and forgotten unpaved road from the last century when the park was built and whose presence was only slightly suggested by the ancient overhanging willow trees that followed it on either side like temple sentinels for a good hundred yards. The road was built by earlier generations when the whole park down to the river had been used but now, in less affluent and more dangerous times, it had been left to the seasons and the Hackensack River that flowed beside it in the summer morning heat.

Peter loved it there. It was quiescence in the heart of the thundering city. When he rode his bike into the hanging canopy of willow branches the hot summer air dissolved into a cool arboreal cave, the sunlight filtering through the leaves a silent cascade of greens and yellows against the broad ashen trunks, which processed past as he pedaled farther and farther into their shadowy depths until the lane suddenly ended, stoppered by a huge hummock of red earth and brown roots upthrust from a deep hole where the last willow in the row was felled by a hurricane last Fall and left to hang unceremoniously and ashamedly prone, half of its bulk stretched out above the silty water of the tidal river.

Peter loved that one tree even more than the magical boulevard. It was his aerie! The trunk a ramp of fallen wood whose leaves still blossomed and whose roots still drank from the hidden waters beneath the red soil.  He thought of it as a fallen yet not defeated giant upon whose back he climbed barefoot like an anthropoid ape or a pirate into a crosstree over the sweeping tidal flow of the river. Then, once in the heights of the Willow, he propped himself squarely in a fork to scan the horizon for all intruders, and once satisfied that he was truly alone, he pulled his sketchbook journal from his backpack and began recording the bright lines at the edge of the horizon.

Once little black boys from the bridge ventured down as he watched their approach keenly from his nest.  Inevitably they saw his parked bike and broke into a scrambling felonious run, not seeing his crouched shape in the overhanging branches, till he dropped silently amongst them and they fell back disjointed and scrambled upon the ground.

But most days, he was alone and safe in his tree to sketch the chocolate-colored boys while they stripped to their skins and jumped flailing like windmills into the emerald waters swirling though the submerged branches. Some would crab from the trunk out over the river using bare Popsicle sticks as bait. Every few minutes they’d pull a beautiful Blue Crab from the water and drop it in a basket pulled from the mudflat. Slowly, they’d fill it with bubbling fury, twenty or thirty crackling crustaceans, their eyestalks so devoid of feeling, just following the shadows like snake-whips dreaming.

Once in a while a curious muskrat would creep to the marsh’s edge and peer out scowl-faced at the noisy intruders then with an animal shrug would slowly turn and disappear into the yellow weeds.

Kids didn’t frighten Peter-by-the-Bay! But he was careful to avoid the adults when he saw them coming. He had a secret way out through the swamps where he’d walk his bike through ankle deep mud or else, he’d just hide amongst the rushes until they left and he’d return to his magical aerie. But most certainly it was the dogs he feared the most. The feral packs that rooted in the reeds and harbingered the city streets by night.  For them he always carried the ice pick in his pack; his sword, his special protection against monsters.

Peter would look out upon the light dazzled waters of the Bay and imagine warships breaking the sound; its sun-speckled distance a sheet of fireworks; the oil tankers and their cross-trees became triremes and ancient sails; the far shores filled with teepees and warriors dancing in the sun. All these he drew in his sketchbook and turned the afternoon into yesterday; no day; the never-ending march of imagined people all filled with the potency of his power.

Then inevitably he’s look back towards the city in the distance; past the boys harrowing the highway from the bridge; past the Puerto Rican girls dancing by the duck house; through the frenzied crowds of soccer players and eventually he came to the Duncan Garden Projects where he lived with his latest foster parents. The tops of the high-rise brick towers in the distance rose above the swaying rushes like a totem of his bad luck; the red buildings filled with the swirling thunderstruck welfare mothers, sons selling crack, fathers pushing guns and sisters walking in red dresses till dawn.

“Maybe next time he would get a good one,” he thought!

And then he would slowly lift from his perch; ride into the afternoon sky like a harrier hawk on the wind; rising, rising till the reclining willow diminished with height; its sleeping tendrils swimming in the river’s slow mouth; rinsing the land’s breath into the tides sweet sweat; the riffles of water raising a shallow humming that only Peter could hear as he floated by like a leaf, wraith-like above the boys washing in the flood, pulling in their harvest of crabs; throwing stones upon the water; and he knew in that awful knowledge that only the true warrior can know; that he was leaving never to return.

He willed himself lower and then lower again to hang upon the water’s surface like Christ upon the Cross with arms outstretched; the swift stream no more than a watery carpet rippling against his bare feet as he called to the boys on the shore who turned startled and looked at Peter suspended in the air and heard him cry, “Come on boys, fly with me and we’ll go to Never Never Land!”

Thomas Belton is an author with extensive publications in fiction, poetry, non-fiction, magazine feature writing, science writing, and journalism. His first book and professional memoir, “Protecting New Jersey’s Environment: From Cancer Alley to the New Garden State (Rutgers University Press)” was an Honor Book awarded by the New Jersey Council for the Humanities. His short story, “The Play’s the Thing,” the first chapter in his unpublished novel, “Stage Fright,” will be published on 2/22/21 by the Adelaide Literary Magazine and was also a prize winner for the Writer’s Digest’s Popular Fiction Awards in 2017. His short story “Seneca Village Arises,” the first chapter in his yet unpublished novel, “The Bargeman’s Daughter,” recently won “Best First Chapter Contest” for the literary journal, “Meet Me @ 19th” an imprint of Arch Street Press (12/28/20) for a novel dealing with racial inequality. His mystery short story, “The Murderous Wood,” featuring T.S. Eliot, Sir James George Frazer, and Robert Graves as sleuths was published in “Mystery Weekly Magazine” in 2019. He has also published short stories in the Young Adult literary magazine Cicada, “The Bargeman’s Daughter” and Arts News, “Atelier.” In non-fiction he has many publications including a recent essay in Superstition Review, the literary magazine of Arizona State University on climate change titled “Sea Level Rise and the Two Cultures.” He is also a frequent Op-Ed writer for the New York Times, The Baltimore Sun, and The Philadelphia Inquirer and a marine biologist with many peer-reviewed scientific publications.