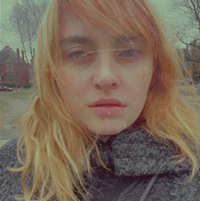 As they stood for coffee in the ribcage of the airport terminal, he watched his wife pluck an invisible note from the air and tuck it behind her ear. His tonsils caught a sigh. The seventh one since security. He watched as she scanned the building’s skeleton for a single stall restroom. She would only be gone a few minutes, as was her chore, but her fresh coffee would sting his hands as he waited. Inside the bathroom, over the sink or on the toilet, she would unwrap the snide comment a mother made in line and the TSA agent’s opinions on abortion. Her ears would swallow them until her porous mind was saturated and she was drunk on a stranger’s fortune cookie. She called this her eave-snatching. She fished from the undercurrent of voices, reeling in the mutters and the murmurs, trying not to drown.

He readied himself for her reappearance. Sometimes tears stickied her face and her bangs were damp and other times she’d pull him against the nearest surface and finagle his belt before he could check his breath. It had been thrilling at first, but he recited his most successful counters until she walked towards him from the restroom. Her face was unusually porcelain but her demeanor was that of a service dog, relaxed but attentive. She nodded as he returned her coffee but he did not ask what she heard. The whispers were gone, she had one day told him in bed.

Perhaps she was not drowning, but he could feel himself treading water. After she told him offhandedly about his mother’s illness during an argument about the dishes, he presented the idea of a second honeymoon. But it was really for him to escape their home. These snippets of speech that she claimed to be lost littered their apartment and lives. He would find work gossip folded in his laundry and subway secrets in the car. He would open the cabinet searching for the coffee press and she would rush over and catch the words from the shelf. Her eyes would lock on his like a candy store thief as she pocketed the whisper in the side of her robe on her way, walking backwards, to the bedroom.

He knew without looking that she was happy their seats were near the back of the plane. Oh the gaggles of conversations she could harvest down the aisle. He wished he could tell them all to shut up, stymie all their conversations with an outcry. Just to yourself, he would plead, keep your thoughts to yourself. Then he would get her back. She abandoned her carry-on at his feet as she shrunk her way into the window seat. After he hoisted his briefcase into the compartment, he found her bag reluctant to rise. Embarrassed, he gripped the handle with both hands and tossed the bag into storage.

As he toyed with his seatbelt, the surrounding voices of the passengers swelled up around him. Every now and then, he will hear a laugh that sounds like hers and he will seek it out. It was that twangy tickle that stuck to the roof of his mouth. He recalled the taste. He discovered this honeyed laugh on their first date, when she quoted every background character in How I Met Your Mother (a show they both, admittedly, did not enjoy but said they did for the sake of appearance). One of the extras asked the waiter for spaghetti and testicles. She had laughed so hard she kissed him.

But now, she listened to her anthology of whispers. Her noise canceling headphones were her favorite for this. As he sat beside her, he tried to read the morse code of her eyelids. Flickers that might give him a glimpse of where she is. He thought about the things that he could do. He could tell jokes. He could whisper bomb threats. He could ask for a divorce. Or he could turn, as he always did, and face forward with a smile on his face, knowing that when her brain walks back to sleep he will meet her there, because, if he’s lucky, they’re dreaming together, and, in the molasses of night, she will reach out her hand for his.

Amanda Nicole Corbin is a writer in Columbus, Ohio. She is a former middle school English teacher who spent almost a decade in Salt Lake City. She has had her short fiction published in the Notre Dame Review, NANO Fiction, Columbia College Literary Review, Thrice Fiction, Superstition Review, Thin Air, The Vehicle, decomP, & others.