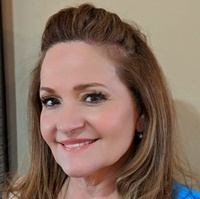 The U.S. border was only a three-hour-drive from my college town, but the idea of going al otro lado hadn’t occurred to me before Isa invited me to go shopping in Tucson. I’d just broken up with my idiotic boyfriend and was ready for a little fun, especially since Teo, Isa’s handsome twin brother, was going with us for added security. I’d been in the U.S. once when my abuela took me on one of her fayuca-buying trips. She smuggled American merchandise into Mexico, a highly illegal trade punishable by jail time before NAFTA was signed into law. Abuela avoided the Federales by crossing back into Mexico only when certain guards were on duty, the ones willing to look the other way provided she paid the traditional mordida.

At the store, Abuela left me in front of a row of television sets while she shopped, telling me not to go anywhere. She needn’t worry. I’d never watched television before, and the cartoon show, about a talking little donkey, captured my imagination immediately. I was only four years old, but I was safe; the idea of unaccompanied minors from south of the border hadn’t yet permeated the American psyche. By the time I returned home I was bilingual. I told my father, yo hablo ingles, and then proceeded to demonstrate by saying, “Hee-Haw, Hee-Haw,” imitating the donkey from the cartoon show.

That connection to America died the year after, when Abuela died. Slowly, I became aware of the great resentment Mexicans harbored for America’s imperialistic reach. The adage “Poor México, so far from God, so close to the United States” from those who blame the U.S. for all of México’s troubles, including droughts and hurricanes, served to exculpate our own government’s neglect, slowly took hold in my mind. America was for me a distant world, too unfriendly and too different to consider it a destination.

For Isa and Teo, however, crossing into the U.S. was as normal as going to the supermarket. Their hometown was less than an hour’s drive from the Arizona border, across which, the family shopped for everything from groceries to appliances. As residents of a designated zona libre, they were entitled to laminated permits that allowed them to move freely across the border. Their not-so-Mexican looks and flawless American accents could land them al otro lado hassle-free should they forget to carry their permits.

The invitation to go across the border for the weekend had come rather suddenly to plan for anything else than what to wear and where to go once we got there. It wasn’t until we were midway through the trip that documentation, or the lack thereof on my part, became an issue. Nobody ever mentioned that my college ID wasn’t sufficient to get me across.

“Don’t you have a passport?” Teo asked with a mix of surprise and worry.

“No, but I’m also carrying my driver’s license,” I said, to ease his mind.

“I’m not sure that’s going to cut it either,” Isa said grimly.

“Too late to go back now,” Teo said. “We’ll just have to see if they’ll give you a weekend pass at the border. Maybe the two IDs will be sufficient proof that you have no interest in staying there illegally.”

“Why don’t we pretend to be American citizens?” Isa said, not convinced I could get a permit without proper documentation.

“Maybe you guys can, but they will immediately see the eagle and the cactus stamped on my forehead,” I said, referring to the seal on the Mexican flag.

“C’mon, we can pull it off.” Isa insisted, already fine-tuning her plan. “Our license plates read Zona Libre, right?”

“Right.” Teo said, waiting for Isa to explain, used as he was to Isa’s off-the-wall ideas.

“Well, if the two of us in the front seats say we are American citizens they won’t bother with the one in the back seat. You and I just have to sound convincing.”

“It’ll work,” Isa assured him. “It worked last time mother and I took Juana grocery shopping with us.”

I was suddenly hopeful that if the maid, with her native, Mexican looks had managed to cross the border without incident, I, with much lighter skin and hair, would have an easier time. I didn’t realize at the time that most Americans, unable to detect the subtle differences in skin coloration typical of our people, think that all Mexicans look alike.

I kept quiet, my eyes moving from Teo to Isa, wondering whose argument would prevail. Teo believed in being upfront. He trusted that the guards, able to tell I wasn’t trying to cross to stay, would give me a weekend pass. Isa didn’t go out of her way to be good anymore; she had stopped such nonsense the day she left Catholic school.

Once committed to proceed with Isa’s plan, I spent the rest of the drive practicing how to say “American Citizen,” should the guard asked me for papers at the border. While pronunciation was a real problem for me, the lack of conviction was worse.

“Soften your Rs, will you?” Isa instructed me. “Also, careful with your Ts, only the British pronounce the middle Ts in the same way as a leading T; Americans either slur it or turn it into a D.”

“I don’t get it,” I said, getting more confused the more Isa explained.

My apprehension increased with the number of signs on the road announcing we were approaching the U.S. border. I noticed many signs reading, “Mexican Curios.” Some read only “Curios” with a big arrow pointing ahead. Mentally, I translated it to mean “All those curious, this way,” not realizing that the different spelling totally changed the meaning of the word. The word familiar to me, curioso, meant inquisitive, interested, probing – all words which described me. Mexicano Curioso. I was Mexican and I was once again curioso about el otro lado. When Abuela took me there all those years before, Hee-Haw was enough to make me feel bilingual. Now that I was able to translate textbooks and my extensive vocabulary included the word ‘curious,’ I had no reason to be apprehensive.

A long line of cars waiting to cross into the U.S. had already formed at the border. Teo rolled down the windows and turned up the volume on the radio to show we were regular American citizens listening to modern American music. The volume of their conversation, also in English, increased as well. My heart pounded and my intestines churned with what turned out to be a mild case of Montezuma’s revenge. I was feeling so American by now that even the intestinal bugs couldn’t tell the difference.

Perhaps the guard noticed the eagle on the cactus stamped on my forehead, or it might’ve been that he was able to smell my fear, but, like a drug-sniffing dog, he went straight to the back-seat window to address me.

“Dónde están sus documentos, por favor,” he said in a heavy gringo accent. I desperately looked to the front seat for help. Neither Isa nor Teo thought I needed translation for, despite the heavy accent, the guard spoke clearly in Spanish. When their help wasn’t forthcoming, I knew I had to do this on my own, no matter how nervous I felt. Gathering all the dignity and assertiveness the occasion merited, I exclaimed:

I couldn’t tell if my companions in the front seat were laughing or crying when I saw them lower their heads while discretely covering their mouths. In the end, Teo decided to tell the truth and explained I had neither permit nor passport. Not surprisingly, we were ordered to turn around at once. They dropped me off at a restaurant on the Mexican side where I waited while they again joined the long line of cars to do a little shopping al otro lado so that the trip wouldn’t be in vain.

A few years later, I crossed the border at that very point. This time, however, in addition to my Mexican passport and my student visa, I also held a brand-new college diploma in my hand, all necessary documents that would allow me to pursue graduate studies at the University of Arizona. To say the experience traumatized me is not an exaggeration. After more than forty years as a U.S. ciddizen, my most common recurring dream is that of trying to return to the U.S. after visiting my family in Mexico and realizing I’ve forgotten my American passport. I’ve never forgotten it, but my heart skips a beat every time a U.S. border agent looks at it, then at me, before he proceeds to tell me, “Welcome home, Madam!”

Maria Valenzuela Frangakis was born in a dusty village along the International Highway in Mexico’s Northwest. After earning a B.S degree in chemistry, she attended the University of Arizona’s Graduate School, earning her M.S. in Microbiology. She spent twenty-five years as a scientist in academic and pharmaceutical labs. After earning her M.B.A., she went on to found Enarxis Research, a biotech consulting company. Her work has been published in Typehouse Literary Magazine and Adelaide. She currently lives in Chapel Hill, NC.