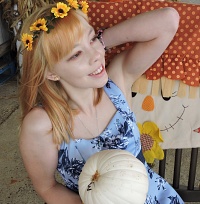 Running with the Wolves

I picked at the flecks of dirt beneath my fingernails as the rain outside turned from a downpour to a soft pitter-patter outside the cave. With my assault rifle holstered against my back, I pushed off the wall and adjusted my army fatigues, before checking the double knotted laces on my boots. “This is Cat-005 of Blue Team, does anyone copy?”

There was no response, not even a garbled static, over the radio. I ran a hand through my short red hair anxiously.

Frederick and Jefferson had warned me to stay put once they realized we’d been separated in the dense woods, our signals struggling to reach each other.

I had lost hope that they would find me hours ago, and I wouldn’t blame them if they had given up the search. I poked my head outside the cave and sniffed the air. Damp, earthy, but the stench of dog wasn’t carried on the wind. Without the use of my radio, I would have to rely more heavily on my senses. I took a few cautious steps out of the cave, my awareness of my sense heightened. It had been one thing to run into a few stray wolves with my team, but now that the skirmish had separated us, it would be instant death to run into a pack alone.

Frederick would be heavily displeased with me for not staying put if he was even still searching for me. Lyra and Kate had been silent since we lost track of them, leaving little hope that was much left of them to be found.

I moved quickly through the trees, hoping to find some indication of which direction would take me back to the base as I kept my head low. If I was lucky, the mud caking my clothes would mask my scent from any predators lurking nearby.

It was as the darkness began to fall that I heard a shrill howl pierce the quiet night. It was close, too close, and I knew it was me they had caught onto as I heard the approach of more than one beast.

I took off in a sprint as I heart snarling not too far behind me. Branches whipped me in the face as I tore through the dark, stumbling as I went. I gave in to the pure terror in my bones, allowing it to carry me faster and faster, until everything around me was a blur.

I must have run a mile by the time my breathing had become ragged, and I’d forgotten what exactly I was running from, giving in to the most primal sense in me, focusing solely on survival.

They were wolves. This was my only thought as I crept through the dark wood. Wolves would tear you to pieces, rip the flesh off your bones, and leave you to bleed in the cold. This was what I told myself every time I ran from them. I had been left in agony many times because of the wolves, and I would always run from them as if my life depended on it.

They stormed after me, barreling through the woods and trampling the twigs and roots beneath them in pursuit of me. They howled after me, as if their shrieking would draw me back to them.

I knew better than that though. Wolves only cared about their pack, and they would leave you writhing in pain to care for their own. I had enough bruises from the wolves to prove it. I stumbled over a loose root, and a sharp yelp left my lips as I felt pain shoot through my ankle.

The wolves were catching up to me at an alarming rate, and to lose their trail, I began to crawl through the dirt and the brush, hoping to escape their notice.

Tears pricked my eyes as thorns tore through my skin, and I choked down a sob. It was an effort now to even crawl. I noticed a dip in the earth in front of me, and a song of flowing water. I realized that the land sloped downward to a rushing river below and slid down the slab of dirt and rocks until I sat at the water’s edge.

The white noise provided by the water rushing downstream covered the labored panting that left my mouth as I contemplated if I was strong enough to swim across the river. I had not yet reached four feet in height, and the water would quickly cover my head. The sound of the wolves approaching helped me to make my decision, and there was a cry from behind me as I plunged into the water.

However, I had miscalculated, and the water moved much faster than I had anticipated. I was quickly pulled under the surface, and I struggled to reach the top for air.

Fighting. I was always fighting. Fighting for my life, and my place in this world. Did I even have one? I began to contemplate the idea that there really was not a place for me, that I was meant to be abandoned by the wolves and left to drown.

A hand shot through the water and yanked me onto the bank just as I was beginning to accept my fate, and I shouted as I was slung over a sturdy shoulder.

“No!” I screamed, “I won’t be abandoned again!” I shrieked, trying to squirm of out the strong grip that held me in place. I could barely make out the child services van through my tears and the blinding red and blue flashing lights.

There was shouting all around me, but it may as well have been the growls of animals as far as I was concerned.

The resounding bang that blasted through the forest woke me from my terror induced hallucinations. I had been on the ground, screaming as one of the animals had been tearing at my armored shoulder. There would be bruising for sure, and maybe worse damage if the wolf didn’t now lay beside me in a pool of its own blood, a gaping hole in its neck. I barely registered Lyra hauling me to my feet, until Frederick spoke.

“What happened to staying in the cave?” he chided.

I took a deep gulp of air, centering myself as I met his tea green eyes. “That was hours ago,” I said. “I didn’t think you were still coming.”

Frederick rolled his eyes and clapped a hand against my shoulder. I took one last look at the wolf, before following them through the woods. I had made a calculated choice, and it had been a mistake, I realized. My pack was here, and they wouldn’t be leaving without me.