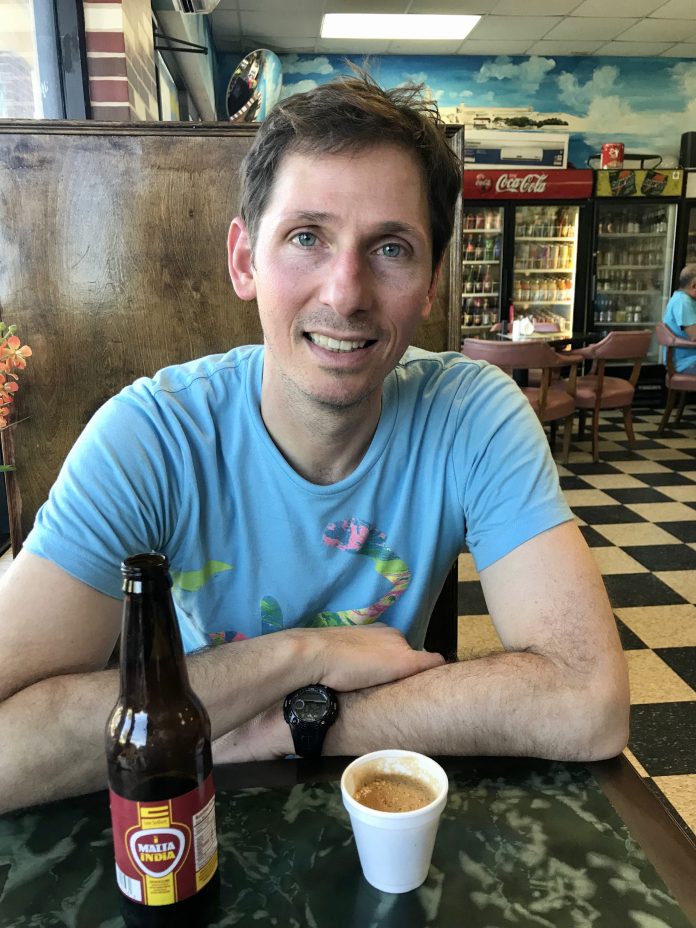 For this story, I think it helps to know that I lived in Germany for about three years when I was a kid. My family moved to Düsseldorf, and I attended first through third grade at an American international school there. Despite going to an American international school, my neighborhood friends were German, and, since they didn’t play sports like football and baseball, I learned to play soccer at a pretty young age. When my family moved to Houston, Texas, after our stay in Germany, I continued to play soccer in the United States.

I’m also a quarter German, on my dad’s side, so, between that and living in Germany for three years, I have a certain affinity for the country. Even after my family moved back to the United States, I continued to root for the German National Team (Die Mannschaft). I still root for them to this day and enjoy watching German club teams–particularly Bayern Munich–in the Bundesliga.

2. Little Özil is your first children’s book. Do you remember when you wrote your first story and what it was about?

As a child, I wrote stories for English classes, but I don’t really remember them. The first story I remember writing–where I took writing seriously–was when I was in eighth grade. I must have been about 13 years old at the time. I don’t remember many of the details of the story, but the main character, who was a child himself, lost his brother. It was heavily influenced by the James Hurst short story, The Scarlet Ibis.

The reason that it sticks out in my mind is that my English teacher then, Ms. Blair, was so moved by the story that she read it to our class. I believe she said she had cried when she read it. I was both proud and embarrassed for having my story singled out. Still, I didn’t really begin writing regularly until I was 16. At that point, my focus was on poetry, not short stories.

3. You are also a soccer player. Was that the inspiration behind Little Özil?

I think you’re being a little generous with the phrase “soccer player” when you apply it to me. I play in the second division of an adult over-40 league, and I’m at best an average player. (Shout out to my team, Hamden United.) I’m definitely no Mesut Ӧzil. Still, I don’t think I would have written Little Özil if it wasn’t for my love of the game and the enjoyment I get from both playing and watching it–but, the inspiration for the story goes a little beyond my fascination with soccer.

I found my inspiration for Little Özil at the intersection of where sport meets societal forces. I thought it was interesting that the German National Team, of which Mesut Ӧzil was an integral part from 2010 to 2018, really caused the German people to evaluate what it means to be “German”. The team was full of players who were of non-European heritage–including players like Ӧzil, whose family was of Turkish descent. The team’s success, especially in the 2010 and 2014 World Cup matches, led to many Germans having a greater acceptance of immigrants and the children of immigrants.

When I was first writing the story (back in 2014 or 2015), I saw parallels between German society and society in the United States. I was hoping–and still hope–that the children and adults who read the story will treat immigrants and the children of immigrants with the same respect they reserve for those whom they consider to be more traditional citizens of their country. The United States, in particular, is, after all, a nation of immigrants, and its history is enriched by the diversity of its culture.

4. When you were writing Little Özil did you consider the interaction between the text and the illustrations?

Not really. I wrote the story as a stand-alone story about six or seven years ago. It was published in 2015 in Balloons Literary Journal in a slightly different version than the version that currently exists–and it did not have illustrations. When Adelaide Books decided to publish this story as a standalone book, we spoke about having an illustrator bring the pages to life, which I think Lamya Sharaby (the illustrator) did beautifully. Through the publisher, I gave Lamya a little guidance on how I pictured certain characters and how the story should be set in Florida, but Lamya took it from there. I have to give her credit for making this story so visually vivid and moving.

5. Little Özil presents a diversity of characters. How does that reflect your own understanding of characters?

I think diversity is very important, especially in today’s United States. And I don’t invoke diversity merely as a way to pay lip-service to an ideal which this country is supposed to live up to. The initial findings of the most recent (2020) census data show an unprecedented increase in U.S. residents who identify as people of color–particularly those who identify as multiracial. The country is changing, and most writing set in the contemporary United States should reflect that.

Generally, as a writer–in Little Özil as well as in my short-story collection, The Changing Tide–I want the characters in my stories to reflect the diversity of this country. Of course, as a white, middle-aged writer, I have to be sensitive that the cultures of the characters in my story are portrayed accurately. I have attempted to do that–hopefully successfully–by having people from different cultural backgrounds read my stories and provide feedback so that I can remove any inaccuracies and correct any misunderstandings.

6. What other authors are an inspiration to you?

Since I primarily write short stories, I have been influenced by books like In Our Time by Ernest Hemingway, the Interpreter of Maladies by Jhumpa Lahiri, and Cathedral by Raymond Carver. I also enjoy reading novels by J.M. Coetzee, Kurt Vonnegut, and Milan Kundera. Of course, much of this is pretty standard stuff, but I still find satisfaction from reading plays by William Shakespeare, poems by John Keats and Robert Frost, and recountings of Greek myths by Edith Hamilton. If I had to choose my absolutely favorite books, I would choose Slaughterhouse Five by Kurt Vonnegut, Hamlet by William Shakespeare, and The Complete Poems by John Keats.

7. What were your favorite books when you were the age your readers are?

Of course, when you asked about my favorite authors, I spoke of those who influence me as an adult. I was a kid once, though–even if it might seem like a long, long time ago! When I think back to my childhood, I really enjoyed the playfulness of Dr. Seuss’ books. My mom also used to read to me from illustrated versions of Mark Twain’s The Adventures of Tom Sawyer and The Adventures of Huckleberry Finn. And, in fifth grade, my English teacher introduced me to The Chronicles of Narnia by C.S. Lewis. I still find those stories, particularly The Lion, The Witch, and the Wardrobe, fascinating today.

8. Your readers are not only the children but also the parents, educators, etc.… How do you expect Little Özil to impact both and influence their dynamic?

I expect Little Özil to provoke discussion. Many children may wonder why the other kids in the story picked on Mustafa. They may ask their parents, “What is a Muslim?” They may wonder why Mustafa’s mother wears a hijab. And, if the children reading the story are Muslim, they may find it heartening to read a story in which the main character is someone with whom they can identify. Overall, I think the book will spark conversations among children about different religions, cultures, and practices–hopefully in a positive way.

For parents and educators, I think they may relate in different ways. They may identify with a story that centers around a family of first- and second-generation immigrants and how that family deals with discrimination. They may struggle with questions of how an immigrant family is expected to assimilate culturally. And they may ask the broader question of what it means to be “American” in the United States today. These are all issues they can discuss with their children or students if they feel those children are ready to discuss these issues.

Of course, they can all–children, parents, and educators–read the story on more straightforward terms–as a story about a child of immigrants who uses his faith, family, and soccer skills to overcome the prejudices of his fellow students and teammates.

9. What message should the readers retain?

I would rather not tell readers what message I think they should glean from Little Özil. I would rather leave that discovery to them individually. But I would ask each reader to come to the story with an open mind and to read it with compassion. I think, if readers open up their hearts to this story and its characters, they may uncover some valuable messages that I did not foresee.

10. Are you working on new stories right now? Do you have any other books in the oven?

I continue to write short stories in my spare time. Most of these stories are directed at more of an adult audience. The story I’m currently revising is called Chewie and the Sock Boy and is loosely based on a string of incidents that occurred when I was a high school student. The band in the story even has the same name as my high school band, The Garden Weasels. Unfortunately, the band became a forgotten footnote in musical history–as Chewie and the Sock Boy is likely to become a forgotten footnote in literary history.

I also keep telling myself that I should dig out my old poems and put some of them together in a collection. Since most of those poems were for or about women I once loved, I would title the collection either, simply, Love Poems, or To All the Girls I’ve Loved Before–the latter as a nod to the great and enduring Julio Iglesias and Willie Nelson song.