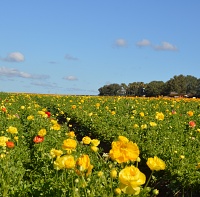 Struggle for Some, Vacation for Others

Living in San Diego can be what many people imagine: sunny beaches, palm trees, Taco Tuesday, and eclectic microbrews. But there’s also the looming presence of something else: the border. Catch the blue trolley south down to San Ysidro, walk the PedEast, and soon you’ll be drinking Tequila in Tijuana.

The difference between the two cities is distinct. Tijuana has a chaotic feel, people everywhere, buildings and roads have a worn-down look. San Diego is vast but orderly. People keep to themselves mostly, they follow road signs; buildings are new, glassy.  One has hawkers hustling churros to cars waiting in line at the San Ysidro border, the other has restaurants serving gentrified tacos in touristy Old Town.

And then in a liminal zone between the two realities is the Otay Mesa Detention Center where deportees are kept behind high walls heavily guarded by security personnel and cameras.

Going about my day-to-day life, it’s easy not to think about this facility surrounded by high barbed wire fencing so close to home. That is, until I read Taylor García’s debut novel Slip Soul published by TouchPoint Press this August. García is also a San Diegan, but he hasn’t ignored the struggles at the border, and brings to light the hardships and perseverance of people coming to America. In his preface, he says he’s New Mexican, a blend of Indigenous, Spanish, and Mexican heritage, and that multi-generational New Mexicans “suffer a centuries-long identity crisis” asking “What are we exactly?”  García explores the kinship between people in detention centers, these places in-between worlds, where it’s hard to know where you belong, and who you are.

Slip Soul starts at the Otay Mesa Detention Center with Osvaldo unable to sleep as “officers come through once, twice, and three times, shining and waving their torches over our bodies.” He has no access to the outside world and time begins to blur. “My first day turns into another one, and another, and another. At this point, I’ve lost count because every day is exactly the same.” Soon, the reader finds out Osvaldo is an older man with knee and back problems, but he pushes through the daily labor that the deportees are assigned. He’s befriended by a young man named Marcos who defends him against a particularly brutal guard, and they both end up in the Center’s hospital.

Here, Osvaldo tells his story, and García uses narrative dialogue to amplify Osvaldo’s voice, weaving the present day in San Diego, with the past in Oaxaca, and even Puerto Escondido through a novel by Osvaldo’s former lover, Joanne.

What’s most compelling is the way the characters in these layered stories interact with the conventions of tourism, whether in Oaxaca, San Diego, or Puerto Escondido. In Oaxaca, Osvaldo as a young man is a zocolo boy, aka escort, where he meets Joanne, a white tourist. Later, after Joanne experiences personal trauma, Osvaldo takes her to his aunt, a madrina, a healer, although he’s hesitant at first, noting that “at the time tourists—mostly hippie gringos—were flocking to Oaxaca to find her to have a healing, except their intentions were false. They simply wanted to have a trip…They abused the ritual.”

Later, as an older man in San Diego, Osvaldo works for a World Mission run by a corrupt founder, where he’s expected to wear “native clothing,” and smile at the tourists visiting the “International Village.” “Sounds more like a museum than a real village,” Osvaldo’s son says. Soon, everyone working at the International Village is assigned to janitorial work in the offices and buildings. And Marcos remarks, “‘So they were preparing you for here,’” meaning the United States, where immigrants find themselves in jobs nobody else wants to do, the jobs that serve the upper crust.

In Joanne’s novel, Pablo owns a bungalow motel along the shore and meets Jucélia and her controlling American boyfriend Ruggy, tourists who are staying at his motel.  Ruggy wants to use Pablo to open a beach bar. His cousin asks, “‘I wonder, primo, why are we going around making him happy anyway? Making his dreams come true?’ ‘Because he’s always had it that way,” Pablo said.

The stark differences tourism has on García’s Mexican characters, Osvaldo and Pablo, versus his white American characters, Joanne and Ruggy, made me pause to consider the role I play in tourism, asking: Am I exploiting another culture, a group of people? How can I respect different cultures more? How might I help them feel more welcome in my own country?

But García doesn’t condemn tourism. He shows the positive sides too, like the relationship between Osvaldo and Joanne, Pablo and Jucélia, people from different worlds who never would’ve met had travel not been available. The ability to see a benefit in a damaging enterprise is García’s gift. Rather than dwelling on the plight of the immigrants, and the power dynamics tourism plays to perpetuate the perceived hierarchy of Western society, his focus is on the goodness people can demonstrate in order to survive. Like the way Osvaldo and Marcos connect and protect each other at the Detention Center, whether fighting off a guard or telling stories to escape their current situation. Or how the couple Hugo and Beatriz give Osvaldo a place to stay when he is homeless, and he says, “People like Hugo and his wife are the reason we can go on living with our fellow man and woman, putting faith in them. Trusting them with everything we have.”

Frequently, García uses the word ‘good’ to describe the people in his story, and he doesn’t shy from the heartfelt connections they gain. Of his parting with Marcos, Osvaldo says their goodbye was “the hug of knowing that you don’t belong to each other—you never have—but that you will always help your fellow man.” And departing from Slip Soul I was left with the feeling of hope, that I can do better, we can do better, and isn’t that what good stories do? Create change. For the better.