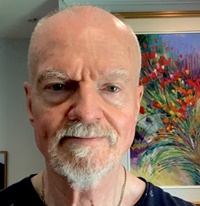 My culprit of choice is multitasking.

My lack of recall could be called disconcerting.

Did I turn off the gas, close the garage door?

Frequent reasons for a U-turn two blocks from home.

The garage I found closed every time, the gas quietly burning only once.

Did I take my blood thinner? Probably not a good thing to double up on, potentially worse, though, to forget taking it once. It oddly makes sense now how older folks get their pills in a convenient portable plastic organizer, compartmentalized by day of the week, conveniently divided into AM and PM. I wonder if I’d manage to mess those up, too. Toss the morning pill absentmindedly in the salad, and then spit it out, like a bug, as an undesired foreign object?

When I’m engulfed in a podcast over my headphones I do chores on automatic, like preparing a meal, chopping an onion. And sometimes I have no clue if I added salt already and don’t want to have to give the perfectly-shaped, raw hamburger patty a taste test. And why the hell am I crying?

There’s a mind game I’ve begun playing. Would you bet your life, I ask myself, that you turned the home AC off? When that thought of a dare comes, I’m already on the Parkway, heading for a week’s trip to the shore.

Rational me won’t take the bait, arguing it’s an excessive price to pay — your life, think about that — for fifty bucks at most at stake, to the friendly power company. And yes, I had turned it off.

Alas, it would have been 50-50 odds at best. It was just a hypothetical gamble in my head anyway intended to dramatically force my recall to the surface.

My mind gets transported somewhere else while immersed in listening to New Yorker Fiction as I vacuum the apartment which might result in a sock getting sucked up, with me faintly noticing, which could help explain to curious scientists the missing-sock syndrome.

Quite often I wander into a room, podcast in ears, befuddled, without any idea what I’m looking for. “Okay, okay,” I sometimes stall, “Pretty sure… there was something…” And I know I’ll have to walk out and it may, or may not, hit me an instant later.

A friend laughs it off. Big deal, those are just senior moments.

Like opening the fridge door and just staring in, at a loss.

And no, I was not searching for my keys.

But the sinister cynic in me, the one without a doctor’s license, concludes: Alzheimers!

The consequential hypochondriac wonders will I sometime forget it’s mealtime? Now that’s a hell of a prompt for someone to chop the onions for me for a good cry. Or will I wet my pants someday because it slipped my mind that I was en route to destination powder room?

Sounds like high time to wager your life, and hope you lose — for real and not just as a silly little focusing exercise.

I tell myself, the transition will be gradual. Forgetting little things, like what was for breakfast, then moving to bigger lapses like the names of loved ones that went inexplicably delete-delete. Easily recalling heydays of twenty years ago, but left without the foggiest how I drove, or that I drove, in the morning from point A to point B. And soon I’d be negotiating traffic three states over because of a few unfortunate turns, with Silver Alert my only hope.

It’s a good sign that I can envision high-drama scenarios, I convince myself, although maybe that’s just a step away from restless fears every waking moment. An uncle suffering from dementia became so frightened by any minor change in his surroundings that — when he was eventually moved to a nursing home — he felt like being trapped in a haunted house. Also, he’d keep telling you the same old crap stories, minutes apart.

I have no cofactor link to afflicted parents or siblings.

I’d be the family trailblazer — my rapidly worsening sense of direction or awareness be damned.

Twenty minutes from midnight, Soho. My car: Gone. Towed. I’d read the sign over and over and it seemed safe. But interpretation always leaves an air of vagueness. Or can’t I follow anymore Manhattan parking rules expressed in red on white on a sign spelling out too many hours and exceptions? My luck, the midtown pound is closed; they hauled the car, because of its location, to the one in Brooklyn which is open all night. The Bronx is closed after-hours, I learn, so I got the better deal. Appreciating the bright side still works. Too far to hoof it to Brooklyn, no matter how romantic across their Bridge. I never bothered signing up for Uber so I spy for a cab to flag down. Pissed at my bad fortune, my thinking stays crisp, and unimpaired by audio drama. Then I feel the barrel of a gun wedged between my shoulder blades. I’ve had no reference point what this should feel like, but it meets anticipation. “Your wallet,” a determined, gravelly voice orders.

“No,” I reply politely not sure if I should dare turn toward my mugger, “I got screwed, my fuckin’ car got towed. I need my license, credit card, if you want my cash, that sucks!”

I pick the leather wallet from my front pocket, pull a wad of bills, holding nothing back, surprised at the stack, three hundred is my guess. Not a bad haul. This is dead-serious, I decide. I won’t play games, I vow. “Here, all yours.”

He grabs the wad. The barrel outline vanishes. I hear footwork scurrying off. “Sorry you got fucked tonight,” he gravels from a distance. “Have a good night,” I say, trembling, exhilarated, waving at a cab turning into Spring Street. I’ve been sharp, I’ve been with it. One-track focus, graceful under pressure. Great to be alive.

Hart Christopher Vetter is a writer and photographer in Nyack, NY, who loves digging for motifs and exploring adventures. He just finished his second novel and a screenplay based on a recent short story. His work has appeared in or is slated for New English Review, Flash Fiction Magazine, and elsewhere.