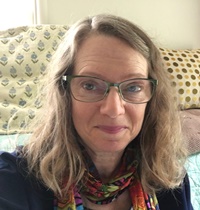 I’ve lost so much distracted by hunger
for blue petals serrated and segmented
a fur coat against the roof of the mouth.

I’ve got my eye on the yellow lily as it draws air
to its candle and waves flapper tassels
of its dress, a lemon scent and citrus pucker

as I crawl among the bitter roots
fungus a blur
at the tree where a dead vole lies.

I’ve eaten grasses like tentacles tasting of
almond with finger chopsticks, eaten
the stem until none remain.

I’ve lost, not climbing the mountain or hill
route through pines, shadows
better the flat land, the curve, at the bottom
a hovel inside a log,

where brightness cannot follow,
where the blue moss sings
a song of its own loss.

Each lamp
a giant firefly
reminder of summer
and my light raincoat will not
protect, thin wool skirt against the damp bench. Cool mist
dilutes shapes. I can’t see past the dark outline
of a small building. I don’t even know
the name of this park. Cars rush
past, headlights illuminate
briefly.

I arrived
three months earlier
traveled south to a familiar climate
and now I’m about to fly home. I wonder
about this century, young in the tooth but old enough
for black and white to color pink if it wanted, for something
greater to happen that doesn’t kill millions.

The plum trees have lost their blossoms
and I’m reminded of African violets,
the ones my mother tendered
on our dining room table
though she claimed
no green thumb
back yard pared pack
from the abundance of the last owners.

Somewhere between marriage and children, she decided
to keep her career, or did she pass street lamps
of her own, lonely damp benches,
when she and my father
traveled through here
before I was born,
and she stared
into the same
mist.

Crows untether from pine, let loose in the sky then
land on mud flats at low tide
investigating what the earth offers up.

Where can I feed my grieving mind amid paperwork, legal issues.
Low tide at Tomales Bay where a pattern lingers but
once the tide rises that will be the past.

People in groups marvel at the shipwreck—
fishing boat from another time
rust along bow and sides,

gaping holes, leaning at an angle, subject to poke and prod
tripods in all light. They stay a few minutes
then gone

And how can I go on without you Mother—
with you gone, my childhood
gone, your set of Jane Austen I donated,
except Emma, with notes on self-control versus the heart.

host the sun but will eventually close for the moon.
Oyster and clamshells on the beach,
remnant of past life.

How to navigate
this bay in a shipwreck—
how to find calm in a forceful wind.

We played marbles
on rough blacktop, rules necessary
like friendship for these smooth nibs who could vanish

in a flash,
clear with green and red stripes or dark with yellow curves,
the game, who could get the closest, not outside

the chalk circle drawn.
Keep your shoulder outside, define your rage
to keep from roaming too far, and even sleeves

stay outside. Rules
like playing music, when it’s your turn to enter the conversation, woodwinds exposed among orchestra players,

and to hear the tones

we had to form a sectional. At music camp
friends dressed me up, a white flare skirt with bright shapes,

platform shoes
as I twirled with the French horn teacher
unable to meet his eyes,

before sneaking out
the side door to the hill, only young thistles
and gopher holes, the site where we’d take our group picture

at the end of two weeks.

Secret Under the Bridge

The rain is different here, they tell us
and they translate for their mothers
at the doctor or the lawyer
and they drive on their streets.

I hear the wind in their ears
as they stand in front of us
in jeans tight as leggings and striped shirts
for their presentation,
as they use the word “naked”
describing their mother, their uncle,
driven down into the boat
by waves stories high
as they crossed
an endless ocean.

The air conditioner acts up again
like a burst of surf
spray, their loss
the same as their parent’s,
a different kind of abandonment,
one home for a new one,
leaving fire for water.

What part America played
in their torment is not something
easily admitted. A long war.
Chemicals dying flowers
a sanguine yellow
while men here drank chartreuse.
And every fall, the leaves.
And the bombs dropped.

They keep the real secret
of their father, their aunt,
under the bridge
where they stood waiting
for the boats.

Laurel Benjamin is a professor of English at Laney College and a native of the San Francisco Bay Area, where she invented a secret language with her brother. She has work forthcoming or published in Lily Poetry Review, Black Fox, Word Poppy Press, Turning a Train of Thought Upside Down: An Anthology of Women’s Poetry, South Florida Poetry Journal, Trouvaille Review, One Art, California Quarterly, Mac Queens Quinterly, among others. Affiliated with the Bay Area Women’s Poetry Salon and the Port Townsend Writers, she holds an MFA from Mills College.