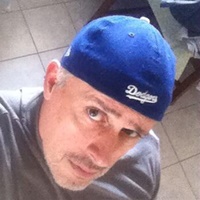 I had not much for work, and I moved back into my mother’s house. She asked me to go to my uncle’s place to shovel snow for him because he’d had a hip replacement recently and probably needed a hand and he might even pay me, although I should not expect it and I should not ask for it.

He seemed pleased to see me when I arrived, and hardly lame. I asked him how his hip was and he told me that it was good. He said that they’d had him walk the hallways at the hospital after he came out from under anesthesia and then they’d put him on a treadmill for the next couple of days and then sent him home with instructions to see a physiotherapist and that he’d been going to physiotherapy, as per doctor’s orders. There is no rest now, he said, they say you heal faster if you keep moving.

I told him that it looked to me like it was working well for him.

I shoveled his sidewalk and his driveway while he watched and our breath hung in the air without moving. There were no neighbors out and no cars came. The work came and went without much conversation and there was just the scrape of the shovel to mark the time.

Done, he invited me in, for a coffee or a beer or whatever I’d like. He did not offer me money, and I did not ask. We went in and he made coffee.

Have you ever ice-fished, he asked me? We should go ice-fishing. I’ve got nothing but time now, and you’re about equally as free. I’ve got an ice shack, we’ll sit in there and be warm with a bottle of vodka and we’ll catch whatever we catch and throw ‘em all back in and it’ll be a good day for everyone, even the fish, even if they don’t know it.

I said I’d like that. Give me a call when you’re ready and we’ll go.

When the coffee was ready, hot and black the way I believe God intended it to be, we sat down at his kitchen table.

We had not even begun to drink our coffee when he stood up and excused himself, saying that he had to go out and check on his neighbor. He gestured out the window to a woman who had come out and started to shovel her own driveway. She was warmly dressed, and she wore a knit cap of many colors. From beneath the back of her cap a single braid hung, it was a thousand hues of silver and grey and it hung to the middle of her back.

I told him that I thought she looked like she was doing ok, so have a seat and enjoy the coffee.

He demurred, saying he felt obligated to help her.

I took that to mean that I, being younger and more able, and not recently released from hip replacement surgery, should go out to help her and I offered to do just that.

Back in fifteen, I told him, and I got up from my seat.

He confessed then. He told me that he’d been sleeping with her, and that he would often help her with small chores, like yardwork, or shoveling snow, and then as often as not they’d go into her house and make love, and that is what he intended to do now.

I said nothing, so he continued to speak.

Her name is Hannah, he said, and she had been a schoolteacher. She was retired, just like him. Her first husband was a low-rent version of evil who was violent to her, but she’d divorced him and then spent the next twenty years competently single. She’d married for the second time then, satisfied that she had at last found the real thing, but the real thing had suffered an aneurysm one day after their second anniversary and she was now a widow. She’d sold the house she had shared with the real thing for those two happiest years and the one saddest day of her life, and then she bought the house across from my uncle, where she was prepared to live out whatever she had left by herself. How it happened the first time he’d crossed the threshold of her doorway and lay with her in the warmth of her home he did not say. All he told me after making his confession was that he figured that that part of life had mostly passed him by, and that things like this just didn’t happen to guys like him. He felt lucky. Finish your coffee, he said, have two if you want, drink the whole pot, whatever you decide. You can leave whenever you like.

He got up and walked outside, picking up the same shovel I’d just finished clearing his place with and going over to her side of the street. I watched him walk over and speak to her, shovel in hand, and I watched her, the tip of her nose red in the cold with the mist of her breath on her glasses and her long braid a multitude of silvers swinging with the movement of her head in their conversation and I thought that he probably loved her already and that she should not ever cut or color her hair and that it would be a wonderful thing for the world if she left it like that forever.

I sat back down and had a second coffee alone. My uncle had worked on the pipelines since they first had invented pipelines. He’d never married or had children, and he kept almost every dollar he scotched up working in those camps that they fly you in and out of, twenty days on and eight days off, where people become strange in the weeks in the winter that are without sunrise and the temperatures are colder than the surface of the moon and some people lose their minds to boredom and gamble whole paychecks cutting cards. There weren’t going to be any pipelines to go work now, those days are done, that’s why I am staying in my mother’s home like a child and why I am over here at his house of a winter’s morning, grey and cold, with a snow shovel in my hands, thinking about money, but that’s my problem and not his.

I stood up to leave and looked across the street to her house. Her sidewalk was shoveled, a testament to the orthopedic surgeons’ skill and to the rehabilitative practice of having him move as soon as possible after the surgery and to my uncle’s own newly embraced motivation. There, through a slight opening in the drapes behind her front window I could see her face. Her cheeks were flushed and her eyes closed and her chin lifted up. I could see her sweater pushed up around her neck and I could imagine her breasts bare below the hem of the sweater and her hair hanging down to the middle of her back like a streamer of those fireworks that fall like waterfalls and I knew that she must be on top of him on her couch, and that he was probably trying to hold that moment in its warmth and in its purity, praying to hold it just as it was for a little longer, even if he would not have called that prayer. There is something gentle in the way old people make love, or at least there should be. No one takes, they accept what is given. Conscious of the other’s scars, they offer their body as a balm. The young make love to break things and the old make love as if to heal. The world is mostly unfair, in that truth you can believe, and real kindness is rare and remarkable and fleeting and deserves to be adored when it happens.

I put my coffee cup upside down in his sink and then checked the sugar on the counter and found it to just hold sugar. There was a big red flour container on his counter, I was sure he never baked so I looked in there but it was empty and just for decoration. There was an ancient ceramic teapot on top of his fridge, and there I found some money. He had a ton of loose change in there and a thick roll of bills wrapped with a single blue elastic. I unwrapped the bills and took two hundred-dollar bills out, replacing them with five-dollar bills from my own wallet so that the roll of cash remained the same size, then I put the teapot back on top of the fridge. I left his house without locking the door and didn’t look at Hannah’s window across the street and above me.

Ten years later and he has been dead for five months and it is the Winter Solstice and there is the sun on the ice on the rivers and on the lakes and I dreamt twice about him. In the first dream we just talked about money and the cost of shingling a house after a storm and I remember every word we spoke. I woke up and went to the bathroom and then I came back and fell asleep and dreamed the second dream where he talked about the forging of a knife and he showed me a knife he’d made, he said, from iron and fire. I told him that the things we make have us in them too, the animus, a little of our own animated souls. He laughed and told me that was the craziest thing he’d ever heard, then he pointed to frozen waters miles beyond his window and told me that there, where the sun shines brightest on the ice on the lake, the fish swim beneath that ice and you can stand right on top of them and they aren’t afraid and they pay no mind and they do not hurry or dart and every so often an eagle will strike the ice and sit with its pinions shadowing the fish unreachable below it, crouching there in disbelief that it has not caught its dinner, and it will sit there a long while before it gives up and takes to flight again. It is proof of the existence of God, he said, that the fish knows what the eagle does not, and he laughed again like he had when I told him that the part of his soul that was in his knife is called the animus, and spoke again of this, and said to him that the animus is the spark of life that gives union to the iron and the fire. He became very serious after that and we sat in silence and I waited for him to speak again but he got up and handed me the knife without a word before he walked away, turning his back to the setting sun over the frozen lake and walking back into the east and into the darkness and I don’t remember how the dream ended, only that when I woke up, I woke up tired like I had been walking for a long time and I knew I had been walking after him but I could not remember if I caught up and I do not know if we spoke again.