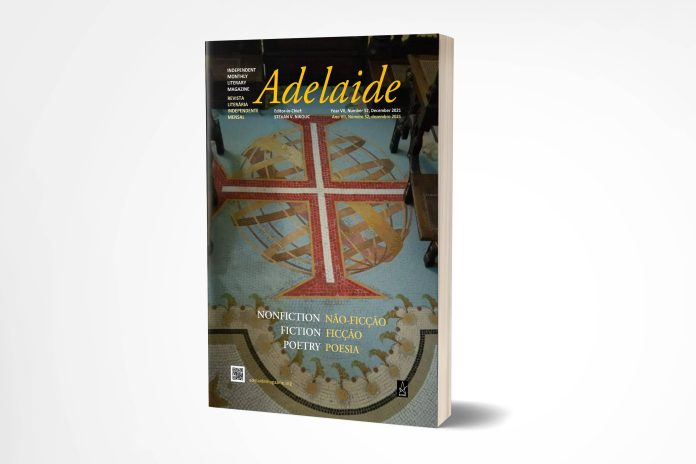 The Elders had warned that this storm was going to be the greatest. No one thought it would be this great. On the foretold day, everyone was cooped in their homes, among the trees, waiting for the torrent and flood surely coming. There was no water that day. Quite the opposite. There was something so odd about that day. There was not a drop of moisture in the air, as if the clouds parted and the sun grew twice its size singeing the forest alive. But the Sun remained the same. The whole village watched the sky, tension building, so palpable my mother could almost cut it and spread it on our next dinner, this thought left a bitter taste in my mouth. As the day approached its end, we started to think that the Elder’s fortunes were wrong. My father joked that maybe the great sky god had taken a day off, and forgotten about his big day. My mother laughed, but I couldn’t. The day felt too heavy for a god to have taken a day off. It felt more as if there were many large eyes pointed at us. Each with their own thoughts and ambitions weighing on the village like an anvil. Each minute was a clash of metal against metal as they sharpened our guillotine on their anvil.

Suddenly those crashes were real. Flashes of light struck upon the forest with loud thunderous booms. Streaks across the sky. Screams are resounding through the forests of all different kinds almost as if in competition against the lightning. The trees quickly became torches against the night sky, our homes in the sky that we thought were sanctuary became our prisons. My parents rushed me out of the hut, and we fled down our tree, racing past light, and heat, and sound itself. Time seemed funny then. It always does when you feel in danger.

Your mind does funny things when your life is in danger. Time seemed to speed up and slow down at the same time, I watch as the world around unfolded at blinding speeds, but I couldn’t seem to move fast enough. I felt myself being pulled along, as I’m suddenly on the forest floor. I watch around me the greens, and browns of my beautiful home being enveloped in glowing orange and red, consuming a spreading like fiery rats. These were no rats. Instead of the meek squeaks that made me feel so big once, I could only hear a ferocious roar, echoing in my head. The sound of dying. Flora and Fauna alike all cry out in agony in a terrible harmony. I regret not paying attention. If I had maybe I would still be with my parents. But at that moment my foot snagged on a fallen tree, its burnt corpse coloring my leg in soot. Unlike the dead I have occasionally seen in my limited life, this corpse was hot. As the tree tunneled and revealed red-hot coals within it, my shin made contact. I could feel it branding into my skin and I screamed jumping up, and over. I clutch my leg trying to avoid looking at it. I look around for my parents but the smoke and chaos are too thick for me to see anything. So thick. I think back to my father’s joke. Despite everything I chuckle. Maybe the sky god did take a break. But it felt more as if something had consumed him. Took his power for his own. And in his absence leaves a vacuum. And vacuums are hungry, and they are never satiated. Not long after the vacuum consumes me too.

I wake in inky blackness. That same heavy anvil fills the air. I shouldn’t be alive. I should be burnt, or suffocated, or crushed. Maybe I am dead. It’s too dark to be life. Life is vibrant. Growing. I look around. Or at least I think I do. Blinding light again. Streaks across the sky, my eyes adjust but, once they are focused the blackness is interrupted with a single red eye, that seems to demand my attention.

“Mortal. You are mine. I have decided to spare you so that you can be a messenger. A beacon of my all-consuming power. Spread the power of Bel, Lord of the First.”