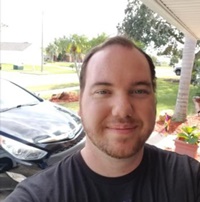 With his washer at home broken, Rafe decided to do all his laundry at the same time at the Water Whirled laundromat. Rafe Reached into his pocket and felt the tiny ridges of the last quarter he needed to finish drying his final load of clothes. With a sense of accomplishment, he smiled as he pulled the quarter out of his pocket. As he did so, his thumb hit the top corner of his pocket, knocking loose the quarter. The quarter fell to the ground, bounced twice, and rolled underneath the very dryer he was trying to use. He stared for a moment at what just happened. He smiled at his luck, and went to reach for another quarter, only to touch an empty pocket lining.

His mouth went from a smile to opened mouth worry. He did not have time for this. He was going to be late for the speed dating night at his favorite bar. His confidence was at an unusual high and did not want to miss it. He frantically looked for another quarter in all his pockets. Surely, he had more! His luck continued to betray him as there were in fact no more quarters. I will just go ask the person at the front desk he thought. He walked to the man sitting on an unbalanced stool, one foot on the floor, the other resting on the crossbar. An old, metal, rusted desk fan oscillating and blowing on what little hair he had left.

“Excuse me, sir, would you happen to have an extra quarter I could have? Mine fell and rolled under the dryer,” Rafe said.

“No, there’s a change machine right over there,” the attendant said. Using his head to point. He sighed loudly and looked up and down the paper to find where he left off before getting interrupted.

Rafe feeling annoyed, and a little stupid for forgetting the change machine, shook his head and walked over to it. He reached for his wallet to grab a bill. A flashback went through his mind from hours ago, when he switched from his jeans to his running pants. The jeans that held his wallet. The wallet that he never took out of the jeans. The jeans that were now in the dryer just five steps away, still soaked from the wash.

The consistent rumbling of the other washers and dryers doing their job, sounded as if a sitcom’s laugh track was directed at him, mocking, and taunting him. Rafe placed his hand on his face while sighing. His index finger and thumb meeting between his eyes as his hand closed.

He dug his pants out from the dryer and found his wallet. The bills inside were drenched and unusable. Unfortunately, there was no one else in here now. Everyone else had gone somewhere else to wait for their laundry to be finished. So, he could not ask anyone else for a quarter. He did not want to go all the way home just for a quarter. So, he decided he was going to try and fish out his fallen quarter from beneath the dryer.

Getting on hands and knees, Rafe opened his flashlight app on his phone and tried to look for his quarter. After seeing mountains of dust, and assorted wrappers, he saw the glint of a single quarter halfway back. He tried to shove his hand under, but it was far too small a gap for his hand to fit all the way in. Frustrated, and knuckles hurting, he stood up and looked for something he could use. “Hanger!” Rafe said. The attendant looked over at Rafe, annoyed at the outburst interrupting his reading.

Rafe grabbed one of his hangers and went back to fish out the quarter. Laying flat on the ground with his feet almost touching the machines behind him, he held his light in one hand, and the hanger in the other. Reaching as far as he could he was almost able to get the quarter. He took another stab at it trying to enclose it with the rounded plastic edge. Instead, he accidently pushed the quarter further back. Defeated, he placed his forehead on the ground and laid there.

“What are you doing?” a voice above said with a slight laugh.

“Giving up on today, I lost my quarter,” he said, with his head still on the ground.

He looked up to see an attractive woman holding an empty blue laundry basket at her side. He got up quickly trying to save himself from any more embarrassment.

“I was just trying to get my quarter that rolled underneath,” he said, motioning to the dryer.

The woman laughed, “Here, it’s on me. You owe me,” she said while handing him a shiny new quarter.

“Thank you so much!” Rafe said as he hurriedly put the quarter in.

“You’re welcome,” the woman said smiling and not breaking eye contact as she started walking further into the laundromat. Rafe turned toward her quickly.

“Excuse me? You said I owe you, how about dinner?” he said with a hint of nervousness in his voice.

“That sounds nice,” she said with another smile. “Maybe in about 45 minutes?” she said while looking at the timer on the dryer.

“We’re already out, aren’t we?” The woman asked

“Yeah, yeah we are,” Rafe said, with his nervousness fading into confidence. Rafe smiled at her “It’s a date then,” he said.

As the two were making small talk and getting to know each other while his clothes were drying, Rafe took another look toward his old quarter’s new home. If it had not fallen under there, I would not have had that interaction with her, He thought. That was now going to be his lucky quarter. He will come back and get it another day though; he’d embarrassed himself enough already.

Michael Bryan is an aspiring writer wanting to bring his worlds to yours.