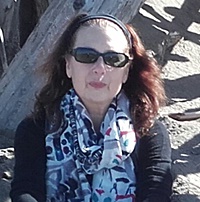 Coiled up by the side of the tracks
while the train whizzes past, kicks up dead leaves
the overcast chill drizzles down fog and dreams
project onto his reptilian stare – he lies there.
At the bottom of the steps
he is expecting her
and in a trance she will take a chance
and follow him into his lair
to get out of the rain
she will miss the next train
dust and smoke will blow all around her.

Down below there will be a blaze, an éblouissement,
an ensorcellement, a haze as she has never seen before
though she will know he is enticing her,
clever, arrogant, mean.
He is a master deceiver – a magician
who decides to speak to her in French today
as even the dead leaves
will say , “C’est toi qui l’a voulu ainsi”
Yes, he will insist she’s having it her way, in the end
and captivated she will watch
these fallen leaves – masks in the fire burning.

First there will be a grand seducer, then a timid recluse,
a frightened child, a bully and finally this funny thing
with greenish skin – a worm she will feel sorry for.
She will then decide to put up with all these lies
or else drink pomegranate juice and wait for winter
to subside and for him to coil up again
once he’ll have had his lunch, loosened his choke and
the leaves will have fallen. Do snakes sleep? She assumes
they must retreat for a while – six months let’s say
as they sulk in a hole down below with their pain.
She will catch the next train.
.
She has seen enough of these masks
that are not hers and is tired of the way
they foil her own spark and madness.
The rock and sway on the tracks
will make her drowsy enough to gaze out the window
and follow the birds in flight.
Her finger will trace the light
as she’ll watch it escaping from all of those clouds
and all of this terrible darkness.

GAME OF THREE
that are afraid of one another

I have to say this last August moon
is even fuller than the sunset was today
the fiery glow over the dunes
has come with a surprise from behind
I believe as I peel an orange rind
and juice spurts into my eye with a sting
and I sigh knowing this taste will linger
past winter until spring savoring
the plump, juicy, acid, sweet and tart
while in the grass I see a clover
dusky and looking for a new start
too soon summer is almost over
as all these colors now yield
to an ever darkening blue
it seems to me that this is true
before the brightening again
yellows in time I take another bite
admitting the moon’s shine
wins over all other sides
in this rock, paper, scissors way
she has to end the day
with a touch of the unexpected
how she trifles with the tides

skin to skin is one thing
but there are rules for
what’s beyond her larval gaze
for one : there’s the snake that flies
and then if she can feel or breathe
underlie this realization

we know : the caterpillar
moves in waves
clings to branches upside down
or stays hidden
in leaves for days
and goes underground;

what she knows : springtime
arrives with flowers and lava
on the mountainside wild with stripes
of blush and spots with flush on skin
where they now meet in bowers
and spins gold … …

so this is the hope : that the look
in his eyes might seal
the wax into an emergence
beyond imago insecta papilio
that she might inspect how deep
the wound truly is

Niamani : she whose purpose is peace

lux, laughter
in spite of itself begotten not made
i saw what i saw …
i.e. in my child’s eyes
his face just after being born
gnawing on his little fist and smiling
so so much
enough to let me know
that there are places that abound in

light
rhymes with love sort of
and also surprisingly or perhaps not…
i saw a similar thing in my father’s eyes
the night before he died
his face bright and wide
with a toothless smile and both hands
raised toward me “hey”, he said
and made two round o’s with his index fingers
and thumbs “hey!”he repeated
to get my attention and i turned for what seemed like
forever around to look at him
and thought “wow!” 102 and getting better !
though he died the next day

light shining
out of darkness and… meanwhile…
my son’s grown up and still
cracking jokes all the time at least with himself he is
and probably with angels too ? sometimes…
now and then the thing about light
but also the thought of something eternal
makes me smile
the word itself light
as in lux aeterna is definitely much more
than just rays of sun light or even laughter
i think it just is something in the eyes
that makes me joyful though once in while
I kind of weep

Lucia Coppola is an ESL teacher who is originally from New York and has lived in France since 1985. She has a professional background in dance and body techniques. Her writing is informed by nature and traditional storytelling. Some of her work has been read on the Clocktower New River Radio and published with Inspirelle, The Parliament Literary Magazine, The Plants and Poetry Anthology, Vita Brevis and Soul-Lit.