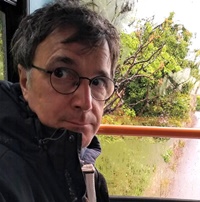 ‘I’ve just been to Paris for a year.’

‘Oh, that’s nice,’ said Sadie, looking up from her decimated brassica bed to see a little girl standing on the path.

She was about four with two pigtails hanging down the front of her dress with an ash leaf print design. More freckles than a pear. Sadie had seen her once before with her parents, walking on the pavement on the other side of the Georgian buildings that overlooked the allotments. A pretty girl. Her father drove a vintage green Bentley, designer dented, which always seemed to have a well thumbed road atlas left pointedly on the back window shelf.

‘I’ve found this little tall glass,’ the girl said, showing her a small dirt encrusted bottle for her to see.

The girl went on staring at her. Sadie glanced down again at the gnawed remains of her purple sprouting seedlings. She’d only put them in yesterday morning. Unlike all the other gardeners here, she refused to use slug pellets, even the supposedly organic ones, but continued to pay a heavy price for her compassion to the birds and hedgehogs. The expensive copper rings and moats of coffee grinds and sand she drew around her tender young plants were an ineffective substitute.

‘I want to wash it because it’s a bit muddy,’ the girl went on. ‘Why don’t you wash it under this tap.’

It wasn’t such an unusual request. The taps at the top of the plots had been awkward to use ever since the council replaced the old twist handle ones with faucets you had to press down and hold in place whenever you needed water. They were meant to discourage hosepipes.

‘That’s a good idea,’ Sadie said. She washed it under the tap, using a dock leaf as a cloth. While she worked she couldn’t help noticing a couple of pigeons perched up in one of the copper beaches near her plot. Biding their time, she thought. They were almost as much trouble as the slugs and snails, always seemed to find a way under the elaborate nets she constructed.

The girl took the vase back once it was more or less clean and laid it gently on the grass path.

‘Do you have a lid for it?’ Sadie asked.

‘Well, I can give you some flowers to put in it if you like. That will be pretty.’ Sadie picked some blue cornflowers that were growing in her lettuce bed, and offered them to the girl. ‘Cornflowers make good medicine,’ she added, since the girl was such an obvious sponge. ‘They’re good for your skin and your tummy. And if you’ve got tired dark circles around your eyes like mine, they can make those go away too.’

She thought fleetingly of the dentist questionnaire that she’d filled in earlier that morning, which had included such obtuse questions as ‘Are you worried about your wrinkles?’ and ‘If you could change your smile what would you most like to change?’

The girl took the flowers and appraised them, then the jar drying in the august sun.

‘No, actually, I don’t think I’ll have a flower in it,’ she said, handing the flowers back. ‘I think I’ll put poison in it instead.’

Mark Czanik was born in Hereford, England, and now lives in Bath. His poems, stories, and artwork have appeared most recently in Riptide, Morphrog, The Rialto, Pennine Platform, Orbis, 3AM, and The Interpreter’s House.