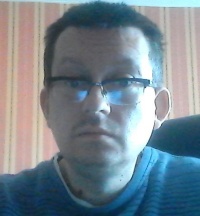 In the bewitched aviary.

The sonnet according to Mr. Shakespeare

Helots muse about moony Golden Fleece of the condor.

Drudges think of the dreamy eternal dew of the hen.

Philosophers ponder on winged fantasy of the crow.

Kings ruminate on a picturesque gold of the jay.

Priests contemplate the dreamed, soft, meek weird of the woodpecker.

Masters daydream about nice marvelous songs of the tern.

Soothsayers dream of fulfilled gold of the yellowhammer.

Knights philosophize about poetic dawn of the wren.

Hoplites fantasize about a red sky of the sparrow.

Athletes describe the most tender treasure-charm of the snipe.

Gods remember an enchanted, dear temple of the seagull.

Poets commemorate the elves-like heaven of the owl.

Bards reflect on most amazing dreamery of the rook.

Paweł Markiewicz was born 1983 in Siemiatycze in Poland. He is poet who lives in Bielsk Podlaski and writes tender poems, haiku as well as long poem.