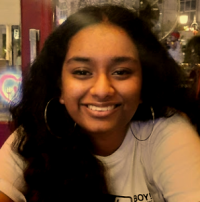 A defeated sigh, an apologetic letter, those goodbyes that are merely just a promise of our paths crossing again someday, the quiet gasp of the one who manages to narrowly escape from the jaws of death — Second chances have, and always will be, every human’s first love and their endmost plea.

Somewhere along the innumerable cycles of learning and unlearning how to live from one day to another, we all get used to the idea of there being a new beginning waiting for us after every curtain call. All it took, however, to strip us off of the rose-coloured glasses on our faces were the series of rude awakenings that we all have collectively dubbed as the “Covid-Era”. As the world slowly strays away from the most dangerous peaks of the virus and moves on to a new era, I find myself engrossed in retrospection on the significance of the past two years in all our lives.

The sounds of many new-borns’ first cries ring in chorus with the incessable wailings of those who lost their loved ones to this dreaded disease, unable to hold their hands while they set off on their final journeys. Left devoid of their income, properties, health and security regarding their day-to-day lives, all they had left in the palm of their hands was a desperate desire for a revival in their lives.

On one hand, we as a species have lived through many adversities on the fragile shoulders of the hope that persists even in the hearts of the most adamant pessimists; But on the other side, this constant shift between eroding and reviving our lives to the point of unfamiliarity has taken a toll on all of us across generations and cultures.

But perhaps, that is what revivals truly ought to be — Never about undertaking new journeys for ourselves whenever the previous one fails, but about setting foot in a direction that seems to be our next calling while still in the same journey.

It is a cruel, burdening expectation one has with fresh beginnings that they shan’t have any traces of the past that they are so desperate to move on from; It is impossible for us to completely erase the footprints of the people and instances from our pasts that have shaped us individually and as a collective across centuries, and to expect the same is setting ourselves up for a never-ending cycle of doubt and doom.

In this fast-paced world, where we manage to change the entire course of our futures by only giving up a few seconds of our present, it is tiresome to define a universal “Normal” for all the people around the globe. Thus, if revivals are to be scaled on the basis of what the world once knew as their comfort, it would lead to a clash in the ideas of what was once familiar to someone from an entirely different background.

Then how do we define a “new normal”, one of the most well-known terms of the pandemic era worldwide, for us and the people around ourselves? Will the existence of a new normal, or perhaps a miraculous return to our past routines changes entirely what we previously have gotten used to defining as “life”?

Life, for all I had known it as till now, seemed more-or-less like a classic noir — An unforgettable saga full of misdirection and moral quandaries, yet not containing a single twist that wouldn’t be obvious to you during retrospection.

Since the pandemic era, however, seeing the unpredictable loss of life and livelihood around myself has forced me to rethink my understanding of what life truly contains for both the living and the departed. For every single one of those souls that lost a loved one in the pandemic, may it be from the virus itself or due to some other unfortunate reason, has had their pain subdued in the eyes of the world as one of the many unnamed figures in the scores of records being published on the death tolls post the pandemic.

The word “Death” itself seems to have lost the sensitivity and the silence that it once brought along with itself wherever it went, and has somehow become a more mechanical concept in the minds of millions.

It doesn’t, however, make the final goodbyes any less heart-breaking to someone who loses a person for whom all the love in their heart and the prayers on their tongue remain reserved, whether or not they continue to be around them physically.

For us the people, who have to face their own mortality and that of the people around them every single waking moment, I believe revivals and second chances serve as a bittersweet reminder to us of the mysterious workings of our lives and our souls; The shadow of death —  though it may sting sourly today, tomorrow, two years or perhaps even two decades from now —  never intends to be a reminder of the fact that one day everyone is to die, but instead it is reminder that you too once lived a life worth having hope for.

To quote the Vietnamese monk Thich Nhat Hanh, “The wave does not need to die to become water. She is already water.” [The heart of the Buddha’s teaching, 1997]. Death is inevitable, yet that does not make the pain of those left behind any less worth remembering and respecting. Yet life too is unavoidable in all its being, and shall always push us towards finding a path for ourselves that gives us a sense of fulfilment and peace if we choose to seek it, and still being equally unpredictable with courses allowed to shock and thrill us as they unfold.

In many cultures around the world there seems to be the idea of a “second chance at life, after death”, or more concisely put, the concept of reincarnation; Having been raised in one such culture, I too grew up believing that this life that I have led has indeed been lived by me a million other times before, and there will be a million more times I am left to live.                                         In the form of revered Punjabi poetess’, Amrita Pritam’s most well-known Work “Main tenu phir milangi” [“I’ll meet you again someday”, published circa 20th century] she takes the voice of a woman promising her lover to meet him again someday after they pass, perhaps as a figment of his imagination, a streak of paint that he brushes across his canvas or as the sunshine eternally enveloping him in her arms, I too, have come to believe that there is indeed a second chance for all of us after death, in a both scientific and philosophical sense.

You may either believe that we get a second chance at living by being returned to the very universe that gave rise to us, returning to the very air and the very land that raised us as their own as we seep into our environment as biological or chemical matter all around the loved ones we cherished until our last breath; Or maybe, you believe in a light at the end of the tunnel, where we shut our eyes merely for moments of rest, revelling in the darkness in front of us our eyes, before we begrudgingly open them to the floods of light having just encashed our revival and are now born yet again into this world.

Having reached the end of my musings of all what I have come to know about my existence, to conclude I’d like to challenge myself into answering a rather daunting question — “For how long really can we manage to foster hope for ourselves, reminding ourselves of the revivals and the new beginnings that wait for us, until we are finally broken by the harsh realities of the life and the world around us?”

It comes as no surprise to any of us that multiple people struggle to maintain a hopeful outlook towards their lives owing to their circumstances, and many turn to questioning concepts like that of Karma and the insistence of many that life indeed is fair to all.

I, from my understanding of life, believe it never is, was or will be about fairness  — Many criminals go unpunished, undetected while their victims die in their own eyes every day of the trauma and guilt they are left with; many innocent people have to face grotesque situations in their lives constantly despite not having done anything to provoke the same —  but instead about learning how relentless things around us can get, how persistent and determined can some factors be in our lives including ourselves. Humans since time immemorial have had the fire in them to fight against what they have been taught are their norms and restrictions, and have always been redefining their legacies to suit their ideologies and their visions of what the world needs to remember to flourish. None of this, none of our lives, none of our present workings would have been possible had there been an absence of this temperament in us in the pasts, and perhaps that is why Life believes that we have ultimately earned our rights in striving towards finding that revives us when we hit rock bottom.

Ananya Anand is a writer, activist and poet based in Haryana, India. Currently a Junior in High School, She has been successful in having found a place for herself amongst the dynamic community of artists based both in and out of her homeland. An avid lover of words since she was six years, Ananya has secured titles in various prolific regional and national contests and events ranging from debate, delegation, writing to research in the field of science and technology.  Additionally, Ananya is also an activist and forever on her feet to give a voice to the issues plaguing our society today, especially the women, children and the LGBTQIA+ community.