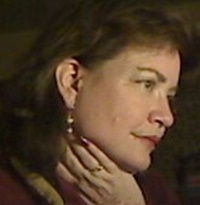 IN LIMINE
By Eugenio Montale / translated by Mary Jane White

Delight, then—if the wind re-enter our conservatory
bringing back to it, and to you, the surge of our life:
here—where a dead
tangle of memories subsides,
—no garden plot—our reliquary.

And that flutter you feel is not ephemeral, no,
it is a stirring within—our eternal womb;
see—how the narrow bed of our abandoned clay
transforms itself into a crucible.

Boiling here, over its precipitous lip.
Walk on out, but slowly—you could bump
into a specter who might save you:
this is where we did compound our stories, our acts
splattered to droplets by the great play—of the future.

Wriggle then—through the single broken mesh
of the net that still entangles us—leap out, slip away!
Go.  I’ve prayed—for this, for you—and that my hour
of thirst ease, and that less bitter seem the rust
and the bad blood between us.

Listen, the poets laureate
move only among those plants
with rarefied names:  Italian boxwood or acanthus.
But, as for me, I love the ways that are become
overgrown ditches, from whose puddles
even some mildly troubled urchin might catch hold of
some thin eel:
whose alleys follow the hills’ edges,
running down between the tufts of reeds
and turn onto a kitchen garden, among the lemon trees.

Better the racket of the birds be spent,
be swallowed up in azure:
that more clearly might rise a whisper
of wandering lovers, whose own tune barely moves,
but carries to the senses this odor
that may not be uprooted from the earth
and rains an uneasy mildness into the heart.
Here, by a miracle, the war of all
amusing passions is fallen silent,
here, as well, to us, the poor, falls our share of richness
and it is an odor of lemons.

Look, in this stillness where all things
collapse and seem close to
betraying their latest confidence,
at times we do expect each other
to expose some mistake of Nature,
some standstill of the world, some ring that fails to anneal,
some thread to unravel at last and set us
in the middle of some truth.
The eyes turn to search,
the mind imagines breaking faith
with all this rampant perfume
even as the day’s light fades at length.
In these sounds and stillness we may see
what in every humane shade will wander away
from troubled Divinity.

Still, the old device of turning left brings us round
to a noisome town where azure shows itself—
if at all—in pieces, and on high, between the cornices.
Rain worries the ground below, and even our future, gathers
as some winter tedium over the houses,
the light grows mean—and the soul, bitter.
When some day at one unlocked entrance
from between the courtyard’s trees
appear the very yellows of the lemons;
and ice melts from the heart,
and within the chest come thundering down
all the songs
of those gold trumpets of the sun’s hilarity.

Tonight a wind plays attentively
–mindful of that loud clashing of blades—
its instruments, the impenetrable trees, sweeping
a horizon of copper
where bars of light attenuate
like kites in a rolling sky
(Clouds in transit, bright
realms above!  Of the high Eldorado’s
cracked doors!)
and the sea casting and casting itself,
a bruise, turning color,
a beached launch, a waterspout
of tortured froth;
a wind that is born and dies
over an hour that slowly blackens—
if only it might play you, too, tonight,
O, instrument gone out of tune—
my heart.

Esterina, your nearly twenty years threaten you,
a grey-rose cloud
slowly, slowly closing in on you.
That you know, but do not fear.
I foresee you–submerged
in smoke—that the wind
rips, or gathers about you—violently.
Then, from the receding sheet of ashy foam
I see you rise,
more brazen than ever,
seeking some further adventure of the heart,
your face intent—as the public face
of Diana, the archer.
A salt-swell of autumn winds
envelops your passing springtime.
So, here, for you, let me toll
my presentiment—from my Elysian spheres.
A note I pray may never leave you—
like some cracked jug—
shattered! Unless it also seem to you
an ineffable concert—
if only of the several
bell-collars.

No uncertain future frightens you.
Your loveliness spreads
over the rock that shines—with salt;
your every extremity burns in the sun.
You remind me of the sunning lizard
motionless on its bare stone;
your very youth, a snare—
as it were—of grass, woven by children.
Water is a force to temper you.
In water, you do revive, renew yourself:
within it, you seem a strand of seaweed, a pebble,
an equable creature
salt may not corrupt,
returned to shore—all the more chaste.

How right you are! Not to trouble
the obliging, the smiling present moment.
There—your gaiety engages its future,
and the slump of your back
brings down the small fortresses
against impenetrable tomorrow.
So, you lift yourself, approach the bridge,
so slender, over a whirlpool that roars—
your profile cut
against a background of pearl.
Hesitating now at the highest pitch—out on the trembling board,
then laughing, and as if wholly taken with the wind,
you let yourself fall into the arms
of that god–a divine lover–who takes you down.

Who only stand and watch: we of that race
left behind–on earth.

Refrain, rebounding,
trapped in the closeness of summer’s glass doors.

Acrid tangle of suffocated notes,
laughter that will not burst
but pricks its way between these vacuous hours:
here play three remnants of a bacchanal
dressed in rags of newsprint—
instruments we have never seen before,
like strange funnels
that inflate, and turning, then collapse.

Quiet music
that springs up by the wayside,
that rises with difficulty and lapses,
taking on these colors
now scarlet, now linen,
moistening these eyes, so the world
seems to be, seen through these half-closed lids,
swimming in platinum.

All the stuffing of the body is released—softly—
and reappears,
stifled and distant:  it consumes itself.
Not so much heard, as breathed.
On fire,
you, too, trapped between the panes of summer,
O, bewildered heart!  And imprudent enough
to try notes beyond your range—upon your flute.

Sbarbaro, capricious child, folder of papers
written over with verses, boats entrusted to mud
moving upon a rivulet; watching them go.
Be clairvoyant for him, you, my passing gentleman:
with your stick deflect his delicate flotilla,
so it not disappear; guide it to its little port of stones.

These rays mark their own attendance
as on a school roll—of whips—
of silver thrown against the walls:
a list of faint lights, the windows shuttered.
An event is returned:
the sun and these diffuse
voices, the usual clamor, find their way barred.

Why?  I think upon our spellbound days,
upon the whirl of hours, all too much alike,
which do repay me.  Some force begins to overflow,
that has swelled, even in me, O reckless magi,
out of the largeness of time.  A single hour is come to raise me up,
showering these high houses, these stripped avenues.

I gather myself up against our country of intact snows—
this soft:  light as a woven vista within a tapestry.
One slow ray slips through our divided heaven.
Crammed with invisible light, our woods, our hills
echo back to me—praise—at every hilarious return.

Gladly will I read the black
print of branches upon the white
as it were—a basic alphabet.

The whole of the past appears before me
as a single punctuating mark.
No sound will ever trouble
its solitary gaiety.
Threading through the air
or dropping to his perch—
a gallant cockerel of March.

Eugenio Montale (12 October 1896 – 12 September 1981) was an Italian poet, prose writer, editor and translator, and recipient of the 1975 Nobel Prize in Literature. He is widely considered the greatest Italian lyric poet since Giacomo Leopardi.