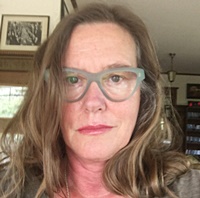 WREAK OF THE COWBOY
By Ellen T. Birrell

The first time I saw Gerardo—oh, years ago—he was riding a flashy paint stallion down a country lane in the setting sun, heading into town for Sunday supper—hat, poncho, charro saddle, Sunday polished boots and a can of Bud Light. He was the foreman of the citrus ranch we moved to shortly thereafter. My mother joined us too.

He had an episode with his heart again—the second time he landed in the emergency room. He felt palpitations, dizziness, some nausea. The first event was due to dehydration and Monster Drinks, “all that caffeine and sugar,” he told me, his partner Marta holding his hand. This time, three, four years later, brought a different confession; he told me that he had been using “cocaina.” I suspect he meant meth, which, along with Bud Light, are the “Farmworkers of America” brands, cheap and widely available (the cocaine of my experience was precious as gold dust and evanescent as shooting stars). Gera took it, he said, to have more energy, to work all day and still break horses, rope cattle, drink, dance and romance the night away. He asked me not to tell David, my husband and fellow farm manager—he wanted to tell him, himself, when he passed his first clean blood test. By then Marta had long since taken the kids and left.

Later it was the riverless slog through the orchards all summer, Gera and I scaling hills, repairing leaks, getting drenched in our dime a dance rain, worrying the farm’s trees into some productivity. I found the difference between my 60 and his 36, my eroding estrogen and his robust testosterone, my broad opportunities and his uncompromising facts.

He was preoccupied, the way an anxious person sitting right next to you can shrink a million miles away into his own uncharted distance. I kept up my bonhomie chatter, fed him coffee and breakfast, bought him groceries. His young horse friend Antonio came too sometimes; I was so grateful to have another presence with an open heart and a good giggle.

In October Gera took some vacation time, said he was going to a church retreat. Antonio and I kept the water going, inevitably getting things wrong, figuring it out and moving on. Gera returned but his voice did not, and when he could speak it was as if his voice was changing all over again: a young boy’s high worry splitting the grown man’s gravitas. He told me the retreat had been in a box canyon in the desert and the participants, all Catholic men, had shouted domestic violence scenarios at each other across the canyon for five days. Some time after, I came across him unexpectedly in the orchard. When he turned to face me, his countenance was split by terror and sudden tears; I took him to my mom’s house.

With a glass of water and a tissue, he told us, in Spanish, how terribly frightened he was; he couldn’t leave his house for long, he was convinced that someone, something was after him, he was a bad man, the ranch was full of memories of his children. Over and over
“I am a bad man.” In my mother’s perfect Venezuelan Spanish and my Spenglish, we attempted to reassure him that no, for us it was not so.

It got no better; Gera was too frightened to come out of his house and then only able to work a couple of hours. His brother came every night, offering vitamins and dinner, trying to get him to a doctor. His sisters came. My fellow crone Lynn pulled off miracles with County Mental Health and he was finally assigned a case worker who was very capable.

Meanwhile, Antonio filled in, with Gera when he was well enough, with me when he was not. Around Thanksgiving the rains came, densely enough to recharge the river and our irrigation pump, but Gerardo was worse. I saw him on the road going to town in the middle of one morning, that haunted look on his face.
“Cigarettes and breakfast, back in a moment.”

He didn’t return. That night, his brother texted me that Gera was safe and would be in touch. When Gerardo finally called me 3 days later, I told him to take this time and think about what he wanted. I would pay him for the week, with half pay the week following, but after that I needed to hire someone.

He was back in 10 days, but within weeks said simply, “I cannot do this anymore,” and was gone by morning.

Edgar at the local feed store told me Gera moved to Tennessee and, more than a year later, he seems to be better, working construction and riding horses again. He came back once to the area and settled his bill, but he did not call or come to the ranch. He married Marta though, and took his children back east. It was several more months before his brother came and hauled away his beautiful paint stallion.

And the river is dry again this year.

Ellen Birrell is an artist and lemon farmer in Ventura County, California. She co-found and edits X-TRA (www.x-traonline.org) and has taught at CalArts since 1991.

OUR BEAUTIFUL TAHOMA by Mike Nolan