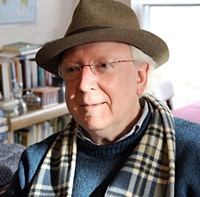 ANXIETY, TIME, AND BEING PRESENT IN THE MOMENT
By Wally Swist

Time presses upon us in innumerable ways.  Proust wrote, “When a man is asleep, he has in a circle round him the chain of the hours, the sequence of the years, the order of the heavenly bodies.”  Not only can time weigh heavily on our psyche but it may also appear to control us in ways which seem even beyond its measure, as William James wrote, “All my life I have been struck by the accuracy with which I will wake at the same exact minute night after night and morning after morning.”  Alan Burdick recently provides insight into the psychological aspect of time in a New Yorker article, offering the elucidation that “most likely it’s the work of the circadian clocks, which, embedded in the DNA of my every cell, regulate my physiology over a twenty-four-hour period.  At 4:27 A.M., I’m most aware of being at the service of something; there is a machine in me, or I am a ghost in it.”

“Ghosts” and “machines” in congruence with each other can precipitate a kind of horror.  Similarly, as in Edgar Alan Poe’s short story, “The Tell-Tale Heart,” time can, in the very least, produce within us an anxiety, possibly reigning chaos in our daily lives: in our relationships, in our careers, in every waking moment.

However, Burdick points out that in waking up at 4:27 a.m., in an incantatory prose which is resonant, that “as worried as I am in these waking moments, I also find them oddly calming.  It’s as if in falling asleep I’d fallen into an egg and woken as the yolk, cushioned and aloft on an extended present.  It won’t last, I know.  In the morning, the hours and minutes will reassert themselves and this seemingly limitless breadth of time will seem unreal and unreachable—the dream of boundless time, dreamed from the confines of an egg carton.  But that’s a thought for tomorrow.  For now, it’s now, and the tick of the bedside clock is the muffled beat of a heart.”

Burdick has successfully taken the ire out of the illusion that time needs to be the perpetrator of any anxiety whatsoever.  The Amherst poet, Robert Francis, who lived very much as did Henry David Thoreau for nearly a half century in a cottage he had built for himself and his wife, Patience, wrote a poem, entitled “Glass.”  In it he creates a working metaphor for what a poem, or poetry, could actually be, and, in fact, what life could be, if we remove all that it isn’t: “If the impossible were not/ And if the glass, only the glass,/ Could be removed, the poem would remain.”  Essentially, this is what Alan Burdick has accomplished for us in taking time and the illusion of timeaway from what it really isn’t, and that being the ever-present moment that Buddhists have always propounded we live in—each changing moment being what is our eternal now.

There actually is little room for anxiety if we are present for the words of Plato, writing in the fourth century B.C.E, “The instant, this strange nature, is something inserted between motion and rest, and it is in no time at all, but into it and from it what is moved changes to being at rest, and what is at rest to being moved.”

Alan Burdick suggests experiencing how time “unfolds in a sentence.  Recite a poem or a psalm by heart: your mind strains to recall what you’ve said and reaches forward to grab what you will say next.”  Expounding upon a passage from St. Augustine, in The Confessions, written circa 397, Burdick intimates a cogent theory of time—and consciousness, “Vital energy: that’s the essence of Augustine, and of you, too, right now, as you absorb these words, strive to remember, and wonder what comes next. ‘Time is nothing other than tension,’ Augustine wrote, ‘and I would be very surprised if it is not tension of consciousness itself.’”