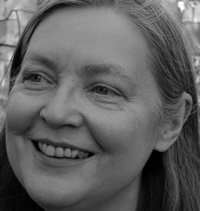 The Princess in the Tower

The voices layered over each other–women’s voices–but she couldn’t make out the words. Valentine? Mannequin? She pulled out her hairpin, set down her coronet, loosed her hair. It fell below her shoulders, below her waist, past her ankles, and to the floor.

She leaned her elbows on the window sill and drew the yellow coils of hair toward and out the casement, where it thumped down along the side of the tower to the ground. At the bottom was a moat in which swirled upright blades crisscrossing back and forth. No escape, no rescue.

In the misty distance, the leaves were golden. Winter soon. Snow. Ice.

She would try to sleep again, dream away this nightmare, wake to a sunny day.

She remembered a crooked old woman spinning thread in a tower. The hag was not like her mother, not like her father. She was bald, when she took off her yellow kerchief. Bony, bloodless. The princess, in her youth and carelessness, mocked her. The old woman commanded, “Give me a lock of your hair to weave into a tapestry.” The old woman straightened. “Or are you too vain?”

The princess caressed her hair, said, “It’s mine.”

The crone curved a forefinger at her. “Keep it till it grows so heavy it breaks your neck.”

Now nobody could cut her hair without her blood spurting out from the slash, so she wore a neck brace, carved ivory with figures of roses unfurling as she grew older. She touched the latch in the back. It would be good to be free. The hard circle cut into her chin. No longer a child, she regretted her parsimony. What was a lock of hair? Not a foot, nor an eye.

The mannequin in the corner of the room shivered. It was headless and hairless. Usually quiet, but this time trembling and whispering (even without a mouth) something about safety.

Outside, birds chirped. There would be a storm later; clouds moved in and dimmed the landscape. She thought she could see the hut at the edge of the woods. A lantern flickered in the window. In mid-October some of the trees were bare.

Her head was so heavy.

She just needed to follow the hair as it spilled downward. At the bottom in the gloom, someone raised his hand to her, hallooed, swept off his wide-brimmed hat and bowed like a courtier. He resembled her mother from this height, elegant straight stance, graceful hand waving to her. She thought she could recognize a bracelet on his wrist, a dragon with a rose in its mouth. Surely, he had come to free her from the tower. He grasped a coil of her hair, tied it in a knot, set his foot in the knot, climbed, and repeated the action. She winced as he stepped up the ladder of her hair. Drops of blood fell on her hand as she tried to keep the hair from pulling out of her scalp. This was too much. She would shake him away.

She put her hand out to tell him to stop. He thought she was waving him up. The mannequin shrieked, It’s time. The princess smelled the iron of blood. It dropped in a wristlet around her hand. She wiped at it, smearing it. And it was no longer a beautiful circle of beads. She wept.

Cezarija Abartis has published a collection, Nice Girls and Other Stories (New Rivers Press) and stories in Baltimore Review, Bennington Review, FRiGG, matchbook, Waccamaw, and New York Tyrant, among others. Recently she completed a crime novel. She lives and writes in Minnesota.