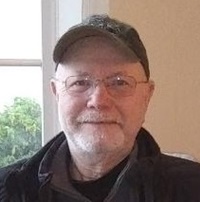 When We Found the Dead Hiker

Slight disorder in the sword ferns beside the trail rumored a possible way to the river, perhaps a secluded spot to rest, snack, have a romantic moment. We’d been living together for six months. I wanted to talk about taking the next step, but I didn’t get a chance.  When we got to the water, I noticed what looked like denim about 30 yards to our left. I stared then flinched. Geena caught the motion, followed my gaze, stepped around dogwood and devil’s club for a better view, then moaned “Oh no.”  I held her repeating, “Be calm, be calm,” in a voice that wasn’t.

He was slumped onto his side, face tilting into the forest duff, nude to the waist, ribs and cheekbones jutting, skin blanched and grainy.  Bits were missing where birds and bugs had been. We turned away from the sight; we could not turn away from the smell.  A cairn of rocks held a plastic zip lock bag with a note.  “Don’t be alarmed. This is as I planned.  Much better than the hospital. I am at peace. Leave me in peace.”

“We should probably tell a ranger.”

“Isn’t it clear that’s not what he wanted.”

“He should be buried.”

“You can’t leave a dead body in the forest.”

“Why?” Conviction was forming in her voice.  “Let’s just go.”

We drove back to Seattle in shocked silence, the image of the body with us, crowding out conversation.  Still with us the next day.  That evening I got out our best cabernet and poured half the bottle into two glasses.  “We need to talk about what happened.   Get past it.  I’m still having trouble with leaving him there to decompose, skin sloughing off, hands curling into claws like last year’s maple leaves.”

“It was pretty horrible, but I’ve decided what he did has a kind of beauty too,” she nodded as if discussing it with herself.  “Better than a funeral.  Mortician fills you with preservative, fixes your jaws together so your mouth won’t gape, uses makeup to put color back in your face. People pretend you look like you’re sleeping then it’s off to forever in a lightless little box.  Weird and sort of horrifying in a way.  Composting yourself in the Olympics seems much better, more natural, merging with the forest.  I’m thinking I’d prefer that myself.”

“Really?  That’s a shock.  Leaving him out there still seems wrong to me.”

“I’m not sure I know my own mind here but it just seems wrong.”

“I should call you Phil.”

“Short for landfill.” Definitely annoyed.  “You can call me Reese.”

It took me a moment.  “Short for recycle.”

“Think about it,” she said.  “A forest is verdant, teeming with life—also thick with death. Firs and cedars blow down, crash and crush through the understory, decompose for decades as plants grow in, on, and through their corpses. Groves of mushrooms spring up on them.  When fall sets in, half the forest ferns turn orange and brown dying back.  Sweet berries become dark puckered pods. In some places, the strongest smell can be the musky odor of decay.  But we’re not repulsed.  We celebrate the cycle. I celebrate the cycle.  Why object to a body gradually becoming forest?”

“I have trouble with the idea a body isn’t more important than a tree.”

Her look was level, edged with stony. “What’s really important is that it was his decision, not yours.”

“I don’t either.  I’m just surprised you’re ignoring the idea it was his choice. And you sound like you think I’m being crazy, talking about composting myself.”

“Not crazy.  Passionate, original, thoughtful, independent.  Qualities I love. Let’s not talk about the hike.  It was a disaster. I had hoped we would talk about our future, but since we saw the body we’re barely talking at all.”

“About our future?  I’m not sure this is a good time. You seem upset.”

I couldn’t read her mood.  I didn’t think this was a good time but felt I had to go forward. “I’d like us to do a hike on the Colorado Trail.  Colorado is the only state where a marriage doesn’t need witnesses.  The couple just needs each other.  Backpackers can find a lovely place, exchange vows they think are important, marry themselves. When they come off the trail, they sign a few papers with a county clerk, no waiting, it’s official. Will you go on that hike with me?  I love you very much.”

“Sounds like a wonderful adventure but I have a question.  Something important to me. What if I die on the trail?”  Level, edged with stony again, the look I’d seen a moment before.  I understood.

“Here is a vow I’ll make.  If we go on this adventure together, I promise to always respect your choices, to always give you space to be the person you are.”  Her look softened into a smile.  “And if you die on the trail and that’s what you want. I’ll pull your body into the forest, prop you up under a beautiful tree, and leave you there to rot.”

She laughed and moved close. “That’s the most romantic thing I’ve ever heard. Of course I’ll marry you.”

Carl Shipley has a Ph.D. from UCLA where he studied Experimental Psychology and Neuroscience.  He lives with his wife near Seattle, WA, and frequently hikes in the Olympic mountains which provided inspiration for this story. He has published fiction in “Penumbra” an anthology of stories by authors in the Seattle area.