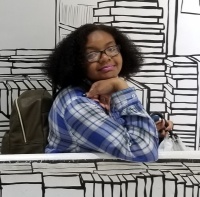 Benio sank deeper and deeper into Mr. Walters’s consciousness. The elevator in Mr. Walters’s mind sped past his recent memories, then slowed down for the ones still rooted deep in his psyche. His retirement party, from a decade ago, marked his fifty years of service: The stiff smiles and pleasantries put on by his former co-workers made this memory boring to record. The memory that came before was of his granddaughter’s birth. The hospital room was full of pink balloons and happy faces; the sterile scent of hospital chemicals permeated through the doors. His daughter’s first birthday smelled of cake and ice cream, there were screaming toddlers and music muffled by the glass. And then came his first wedding anniversary. Mr. Walters was young then, handsome and bright-eyed. His wife cried over a pearl necklace he gifted her.  Benio smiled the first time he saw this memory, but today was his last day and he couldn’t bring himself to smile again.

The last memory was Mr. Walters’s fourth birthday party. The party wasn’t grand or loud. Faint music played as Mr. Walters danced with his father. Benio recorded this one yesterday in explicit detail for Mr. Walters’s family. Once he’s gone, all they’ll have left are pages of his life and their own memories of him. The last one Benio was requested to retrieve was locked behind Mr. Walters’s door of secrets. He was warned against it by a man in a hooded coat. He said he was an old acquaintance of Mr. Walters, one that Benio hadn’t seen in any of the old man’s memories. He should be worried, but he wasn’t.

There were tall double doors with moving mechanisms like the inside of a clock. In his experience, as limited as it was, doors that hid secrets imprinted hints of what the secret was about. This secret had something to do with Mr. Walters’s profession. Benio twisted the handle. It was locked as he expected.  Maybe the lock mechanism isn’t inside the handle, but on the door itself.

Benio didn’t feel the ache and strain of his limbs as he grew until he was as tall as the door, for being in one’s subconscious was painless. The gears were cold. He pulled hard on one, but it would not budge. His finger was almost pinched between the metal gears. He kicked the door, slammed into it, and nothing happened. Different tactic then.

Benio shrank back to normal size; the door was warm under his hand. He closed his eyes. The door is as tall as a waterfall, brown like the bark of palm trees, the gears are gold like my favorite pen, and they move as one. The door glowed blue, the gears stopped turning, then turned counterclockwise. He pulled down the handle and the door opened a crack before he was blasted back. It happened so fast he couldn’t comprehend it. He staggered to his feet, the door was closed, the gears turned clockwise, and it was covered by a translucent blue shield. Benio tentatively touched it again, then snatched his hand back. Blue sparks glided onto his fingers then disappeared, red blisters were left in its place along with a burning sting.

The subconscious was supposed to be painless. I was warned this would happen someday. How am I supposed to become a mentor if I can’t do this much? Soft ringing pulled at his mind. The longer it went the louder it became, until he opened his eyes to the white walls of Mr. Walters’s hospital room.

“Did you get everything?” said Mrs. Walters. She handed him the notebook, turned to a fresh page, with his special pen clipped to the binding.

“No. There was a door and-and…” Benio didn’t go on. He turned off the alarm. It was a minute past 2800. He started at 2700 and has nothing to show for it. He set down the notebook. Mr. Walters was just as he left him, sedated for the end and worn from time.

“If everything is finished the doctor is ready for him,” said Mr. Walters’s nurse.

Benio moved out of her way as she unlocked the bed’s wheels and pushed him out the door.

“That’s it? There’s nothing left?” Mrs. Walters held the blank page, hands shaking, her tears wet a few spots on the paper.

Mrs. Walters’s cry pierced his ears. She turned on him, and her small fists beat against his chest. The assault barely hurt; his failure was painful. He repeated over and over that he was sorry until she calmed and sat down.

“I hoped maybe there was something he hadn’t told me. Theo was forthcoming with everything. How can I live on not knowing the one thing he kept to himself?” she said while fiddling with her pearls.

Even though he’s been doing this job for two years, Benio didn’t know how to comfort her. All he could do was bow and offer his condolences again before leaving.

“I take it you didn’t open the door?” The man in the coat stood across the hall.

“I couldn’t,” said Benio. His back straightened, his hand shook around his notebook and he took a step back towards the room.

“Just as well. What happened between the old man and I should stay locked away.” The man patted him on the shoulder. “You’re lucky you couldn’t open the door. I would’ve hated for you to go home in a casket,” he said it like taking someone’s life was as easy as tying one’s shoes.

As the man took his leave, Benio fell back against the wall, shaken, and he wondered if this encounter would be locked behind his door one day too.