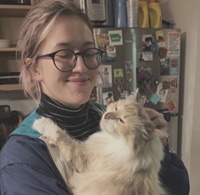 Because it was her first day out for a while, she wore her favorite neon purple dress. They let her pick it out, surprisingly. She wanted to be noticed as she walked up and down the aisles of the train. She was already seeing people’s eyes drift to her as she stood at the train station. She figured if they saw the dress, they would see her beauty, too.

Because she knew she was beautiful. If she was ugly, people wouldn’t be jealous of her like they were. She would have friends that truly had her best interests in mind and weren’t secretly happy when a hair was out of place or her lipstick was smudged.

The clothes the people wore on the train weren’t nearly as pretty as her purple dress. She smiled confidently as she noticed more and more people notice her as she walked to her seat towards the middle of the train. By the time she sat down, everyone was looking at her. She knew it was because of her beauty, but she didn’t let it go to her head. There were advantages to being beautiful and to being ugly, prettiness just came with more.

The train was soon full, and every seat was filled except for the one next to her. She was a little bummed; she liked a good conversation, and she hadn’t had one in a while. The train had started to move when she heard a series of thuds on her side. The train slowed, and a man about her age bursted through the doors breathing heavily.

He gestured a thank you to the conductor and took his seat next to her. She looked at him out of the corner of his eye; she’d seen people like him before. He wasn’t necessarily ugly, per se, but he was not attractive enough to be considered beautiful like her. He was attractive just enough that she wouldn’t be insulted when he tried to talk to her (they always did).

She waited. Besides the out-of-breath “hello” he offered as he sat down, he said nothing. Still waiting. And waiting.

“I see you just barely made the train,” she practically burst out.

But that was it. He just kept his head down and looked in the opposite direction of her. She looked around the train and noticed that people were still staring at her. They were staring at them. She was disappointed at the failed conversation attempt, but not yet too discouraged. He was probably just nervous, probably thought he didn’t have a chance with her. He was right, but she liked to see them try.

She tried again. “What held you up?”

“Alarm didn’t go off. Slept in,” he said distractedly.

“Well, you really shouldn’t–” She trailed off. He looked nervous, but not in the way she was used to.

“Um… Look, no offense,” he said in a whisper, “You seem nice and all, but I really don’t need people seeing me talking to you.”

She opened her mouth to speak, but before she could say anything, he said, “It’s just, my reputation already isn’t the best, and you’d just make it worse.”

She was stunned into silence. Sure, she was gone for a while, but not that long. Her eyes began to well up, and a single tear fell down her cheek and landed on her purple dress, marking it with a dark spot.

He noticed and got uncomfortable.

“Look, look, don’t worry about it too much,” he said. “I’m lucky that you were on this train; the ticket was half price since the seat was right next to you. I wouldn’t have been able to afford it otherwise.”

This made her cry even more. A high-pitched sound like a dog getting its tail stepped on escaped her mouth as her shoulders shook up and down. He realized he had said something wrong; his face turned red as he turned to the people around him for help, but while everyone was still staring at him, no one said a thing.

A woman finally piped up from the back. “She’s disgusting!” Her comment was followed by a chorus of “yeeaaaahhs” and a sea of finger pointing.

Oddly, this calmed her crying. They were acknowledging her; they were talking to her, gesturing toward her. It made her feel better. She managed a smile, and she looked over to the guy next to her. She saw his eyes widen a little in a way that some people might mistake for fear, but she dismissed it as more awe. He rubbed his temples, squeezed his eyes shut, and shifted his legs to face away from her.

The nervousness he was showing earlier really was just because of her beauty, she thought. There really was no other plausible explanation.

They got off the train, and she said goodbye to her new friend. He scurried away without saying anything back, but she didn’t think about it much; she was distracted.

Her face was everywhere. It was on posters in store windows, flashing on picture-changing billboards, on the front of magazines and newspapers.

The smile that was grown on her face fell a little; she was wearing her yellow dress in that picture that was everywhere. It was after she stained it red, too. It was like these people wanted her to look bad.

Her smile didn’t fade all the way, though. She knew these people were just jealous. Jealous of her beauty and how obvious it was that she was above them, so they tried to choose an ugly picture of her. Well, they failed. Her beauty was still radiant, even in that yellow dress.

She started to walk home, but something in a shop window across the street distracted her. Next to a newsstand with papers that read “Local Murderer Released Early; Citizens of Small Town Upset” she saw a dress, but this time, it was already red.

Anna Fritze is an English major at Concordia University, Saint Paul whose work has been published in Misery Tourism and Down in the Dirt.