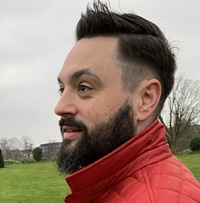 head-first, blood-slicked
hair like a tiny John Stamos.
Bubbling with style but no pronouns.

Snip the umbilical, suction
and wail, count ten
fingers and toes but no sex.

The womb was my
closet, sonogram spun
straw into a golden child.

Before I could forge
a memory or heard
the word intersex,

Show it to me. What’s wrong with my baby?
Ten fingers, ten toes, ten hours to coax
from womb to frigid Missouri day.
A simple question: Girl or boy or hoax?

You keep saying tests. Chromosomes? Please why
are you shouting? No dope or coke or X
in me. Three days to wait, wonder, pray
for XX or XY, my babe in flux.

Twenty-six days late and still not ready
to see the sun and bloom forth a sex.
The space between its thighs—tiny, empty
of split, of stem, every doctor perplexed.

Puberty manages the game, changes the signs, sends
semen and urine down the wrong base lines.
I dive
to the carpet like plastic
George Brett diving on my bookshelf.
Neither of us can make the out.
One testicle softball size,
a boiling ruby hardball.
George’s miniature mitt is no match.
I can’t
stand
walk run
throw.
Fetal and crumpled, holding myself like broken
bats might spill from my middle.
Vas deferens shred silent
signals to kidneys.
Swing.
Bunt.
Swell.
Steal.
Pain like splintered bats flying
through my plumbing. No home
runs in this game, only foul after foul after fever.
Two hours of step-umpire’s “stop being
a baby,” finally mom’s 911-call for a review.
Infection striking out the side:
kidney through scrotum.
Hit the bench.
Take a shower.
Five days bed rest, blood
tests, IV antibiotics before
I’m back in the game.

This is a Pornographic Poem

Not like that. Rural Missouri. Sunday night. Delta Chi party barn. Rolling Rock sweats my palm. Half a dozen fraternity brothers crowd dilapidated couches and a rented VHS. Excitement rises—not like that—with thrust and retreat and the rhythmic slap of skin like a sexual touchdownhomerungoooooooal. My dry-hump, high-school exploits seem meager—not like that. Playacted moans intensify. Bodies in tandem row, disturbingly pubescent oh yes and guttural commands and moans and groans and hands and knees and slaps and he pulls out and—

Wait. What? Is that supposed to happen? Splattered across her breasts. Is he okay? Is that puss or—
oh.

Five brothers cheer the magic money shot, the cream on sweat-drenched skin. A childhood chat with Dad delivered more ums than information, failed to expound on the plumbing, the penetration, the hydraulics of ejaculation. A decade of locker-room jokes now explicit on screen. I sit in silent revelation of my intersex sterility. I can orgasm—not like that.

This nurse says just breathe,
this won’t hurt a bit.
My breath blasts
out a scream.
Average male
urethra is 8-9
millimeters.
Ample space
for a 6.3 mm
cystoscope.
Mine is more
or less more
and less.
More meandering
Missouri than unswerving
Suez Canal.
My urethra as ironic
inversion: man-made
manhood, though nature
carves a truer path.
Stop being
a baby, she says,
pushing a freighter up
my uneven urethra,
probing my channel
for the gap, the leak
somewhere north
of my “natural” opening.
Stop, I stammer.
The scope rams
another slim spot, ripping
pain up my keel.
Stop, barks
the urologist.
Cystoscope set to full
reverse, backing
to calm, open
waters. I’m drenched
in Suez spray.
Urologist cocks
his head, says
Let’s try again.

Chris Arnone’s work has been featured in Runestone Literary Journal, No. 1 Magazine, and FEED. He has an MFA in Fiction from the University of Missouri-Kansas City. He is an intersex author, poet, and performer living in Kansas City, Missouri.